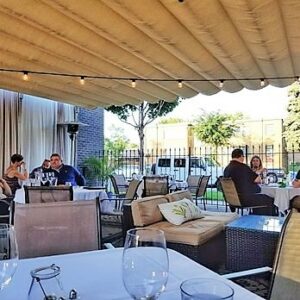 Highland Park is one of three Saint Paul neighborhoods that is contiguous with Minneapolis (the others being Merriam Park and Midway), and it has a lot of attractive things for Minneapolitans to do and see when they cross the river. One of those is the Highland Fest, an old-school neighborhood summer festival that’s been happening for 36 years now. This year’s Highland Fest is July 19 through 21. Highland Fest was born during the Reagan years and in the times when the Ford plant heavily influenced community life in Highland Park. There are vestiges of that in the festival, but there are also vestiges of Saint Paul’s roots as a farm-oriented city, as a working-class power center, and as a populist cultural icon. It’s a weird combination that you couldn’t really imagine existing in Minneapolis, let alone Atlanta or Brooklyn or San Francisco. It has a juried art fair folded into it, but also—bingo. It has a bouncy house and some state fair-type food, but also a huge 5K run/walk, food trucks, and wine and beer tasting with artisan bread. It’s got echoes of an Open Streets / May Day kind of community celebration, but also has an All-Ford Car and Truck Show. It has some up-to-the-minute popular music on its outdoor performance stage, but also Irish dancing and a few nostalgia acts. Perhaps that’s what they mean by their main slogan—Something for Everyone.
The Highland Fest has a long list of corporate sponsors—US Bank, Highland Bank and TruStone Financial Federal Credit Union; the iconic local jewelers, Moeller; many other local businesses large and small; Health Partners, several chiropractors and specialist clinics; and more. And with all the disparate forms of entertainment and enlightenment listed above, there’s still more! A not exhaustive list (although, like me, you may find it a bit exhausting to contemplate) includes a petting zoo, wiener dog races, a business fair, a home expo, inflatable rides and games, a Powerhouse workout class in the park, a movie in the park Friday evening and tours of the Highland Park Water Tower Saturday and Sunday. Among the many music acts featured on the Main Stage, the Rolling Stoners, the Pan Handlers steel drum band, and Salsa del Soul are highlighted on the Facebook page. Or see the full schedule at https://www.highlandfest.com/live-entertainment. 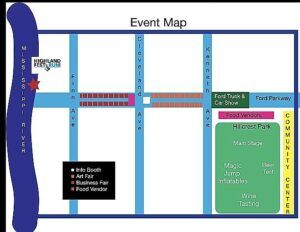 The Highland Fest is produced by a nonprofit that exists solely to put on this festival, and thus (fortunately), major events within the festival are noted through separate Facebook events, so that attendees can better plan their time. The Highland Fest is free of admission, but the beer and wine tastings, food vendors, art vendors and perhaps some other activity require payment. The 5K run/walk and Kids Fun Run happen Friday, July 19, as part of “an evening of exercise to kick off Highland Fest,” with the 1K Kids Fun Run at 6:30 p.m., and then a 5K run/walk beginning at 6:45 p.m. Participants in the 5K will get a free drink coupon for use after the race at the Highland Fest beer tent, and those in the 1K will get an ice cold treat after. See https://www.facebook.com/pg/highlandfest/events/ for more details.
If you can’t make it to the Highland Fest but still want to explore this very interesting neighborhood just across the river, there are other seasonal delights in the summer to lure you there. One of these is the Highland Park Aquatic Center at 1849 Edgcumbe Road, between the southeast corner of the park (Highland Park) and West 7th Street. Unlike Minneapolis with its plethora of lakes, Saint Paul only has two or three of recreational size and quality, so they make up for this lack with a really great aquatics program in their parks department. (And by the way, this year marks the first time in a long time that Saint Paul has forged ahead of Minneapolis in the parks excellence stakes. But it’s totally our fault; Saint Paul has remained as number two in the nation, while we slipped from the top spot to number three!) HP’s Aquatics Center boasts a 50-meter, eight-lane lap pool, a children’s activity pool with a “prehistoric whale bone splash pad,” an aquatic climbing wall, two 1-meter diving boards, two drop slides, and a large two-story waterslide. There are full-service locker/changing rooms and life jackets and other equipment to rent. Many activities are available, such as water aerobics, adult and child swimming lessons, party rentals including cabana shelters, and concessions. You may not bring food or drink into the aquatics area with the exception of water in a non-glass closed container. Admission ranges from $4 to $7 for a single day to a $24 day pass for a whole family, or you can purchase membership passes for only this aquatic center this summer ($90 for Saint Paul residents, $120 for non-residents) or an annual membership pass to all Saint Paul’s aquatic centers, which includes the Como Pool and Great River Water Park and others. Of course they have a Facebook page.They’re open until Sept. 2, except for occasional weather-related closures. 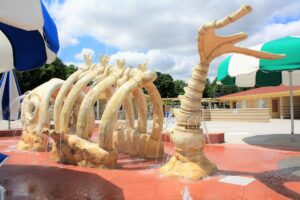 Another thing that makes Highland Park a great destination is restaurants and coffee shops. One special coffee shop, where we have attended meetings in its small but comfortable meeting space, is Quixotic Coffee on Cleveland Avenue, just a block off the Ford Parkway. Quixotic is not a coffee roaster, but they pour a couple of excellent local roasters’ products—Bootstrap and Blackeye. They also have a small but excellent food menu, again pulling in the best of other vendors, such as Castle Rock for dairy, Ferndale Farms for organic poultry, Sift Gluten Free and Patisserie 46 for bakery, and Rishi Tea for tea. They also serve cold drinks, kombucha and beers. 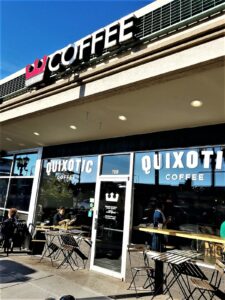 If you’re the kind of person who occasionally likes to drop serious money on a very special “worth it” dinner, there are lots of places like that in the Twin Cities. One you may not have heard of is Joan’s in the Park, 631 Snelling Ave., just a few blocks north of the Highland Park Golf Course. In the summer you can experience outdoor dining on a breezy but covered patio with mood lighting and full white tablecloth / silver service. Or year round opt for indoors, where it’s white tablecloth with all the trimmings. You should probably reserve; it’s definitely not the kind of place you can drop into on a whim. The restaurant is in a tastefully converted former pizza place, and was opened in 2011 by partners Joan Schmitt (the manager and maitre d’) and Susan Dunlop (the chef). Their thing is a four-course prix-fixe menu of “new American” cuisine. It might be on your radar anyway, if you are that kind of person, because Joan’s in the Park was one of the 2019 Critic’s Choice Top 50 Restaurants of Mpls.St.Paul Magazine. The current price for the four courses is $62, dessert and drinks not included, although if it’s too much food (portions are small and elegant) you can opt for a la carte, but I suspect that’s rare. Menu items change at random and seasonally. Joan’s in the Park is open Tuesday through Saturday, 5 p.m. to 10 p.m., and can be accessed online for reservations and the current menu at http://www.joansinthepark.com/ 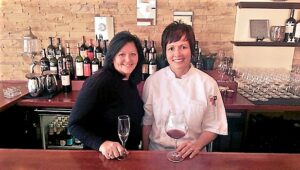 Manager Joan Schmitt and Chef Susan Dunlop, owners of Joan’s in the Park.