There are internet forums where people discuss every issue under the sun. Yes, even obscure subjects like public transit have their own online discussion groups. And, as you can guess, many people in those groups have the “transit vs. roads” or “transit vs. cars” misconception. Interestingly enough, very few people ever think “transit vs. bicycling” or “transit vs. walking,” even though those formulations could be just as logical, or illogical as the case may be.
The truth is we need good roads, appropriately designed to be useful to all classes of traffic. For example, in the Netherlands, they have a policy of making roads safely accessible to bicycles. Busy, high-speed streets usually have a bicycle path physically separated from both the car lanes and the sidewalk, not just a painted lane that used to be called the “shoulder.” Whether or not the United States should adopt a similar road construction ethic is something I’ll leave to the bicycling advocates, but the point is that roads can be constructed in such a way as to respect more than one type of traffic.
The Southside Pride readership area and other South Minneapolis thoroughfares will finally be getting bus-only lanes. They have been sorely needing something like this since at least the 1980s. Hennepin, Nicollet and Chicago Avenues between Franklin Avenue and Lake Street will be getting “the treatment.” These bus lanes will come at the expense of street parking during rush hours.
One lesson learned: there is a conflict between on-street parking and efficient operation of bus service, especially on very busy streets. What can be done to alleviate this conflict? I can think of three things that could help: 1) Encourage people to park around the corner, not on the main street. 2) Encourage businesses to allow public use of their parking lots, especially after business hours. 3) Encourage conversion of vacant lots to public parking. If I recall correctly, this last one was done on Eat Street (Nicollet Avenue) several years ago and was a real blessing to the neighborhood.
One thing that does not work, except in limited circumstances, is the combined bus and bicycle lane. These are very dangerous to bicyclists, ironically for the exact same reason they were originally considered to be a good idea: buses and bicycles tend to operate at the same average speed of 10-15 miles per hour. However, those averages stem from different factors. For a bicycle, that is the actual speed most people are capable of pedaling on a consistent basis, whereas a bus may be going 30 miles per hour for a few seconds, then suddenly have to stop and start again to pick up and drop off passengers. This means that buses and bicycles trying to share a lane get in each other’s way—an accident just waiting to happen! That said, one place this concept does work is the wrong-way bus lanes on Marquette and 2nd Avenues downtown. During rush hour, only buses get to use the lanes, and there are so many of them there is no room for anything else anyway. However, most buses that use the wrong-way lanes are rush-hour-only expresses, and when it’s not rush hour you can practically hear a pin drop on those streets. Buses still use the lanes, but at drastically reduced numbers. Bicycles are allowed to use the lanes at those non-rush hour times. This concept is called “temporal separation.”
Physical and temporal separation of different types of traffic, going different speeds and having different weights and sizes, is a major key to making road traffic safer and less frustrating for everyone. Those of us who advocate “alternative” transportation would do well to remember that advocating against cars and roads is counterproductive, and we would be best off advocating for appropriate road designs for all traffic. Let there be peace on Earth, and on our roads, and let it begin with me. 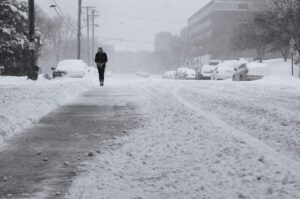