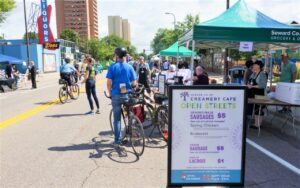 Open Streets Franklin Avenue is on Sunday, Aug. 25, this year, as ever from 11 a.m. to 5 p.m. Just like last year, the route stretches from Portland Avenue to 27th Avenue in the east (a block shy of the Seward Co-op store). As each year’s Open Streets builds on the successes of the last, Open Streets keeps getting bigger and better. And 2019 is no exception. So, let’s dive right in.
First the details which the devil is in. Plan your day, plan your route. You will only be able to cross Franklin at certain intersections, and these will have long waits. You can download and print a free pass for Metro Transit, all day and almost all routes, and there is an LRT station right in the middle of the route, slightly east of the American Indian Cultural Corridor, and also a frequent bus route, the #2. Or you can ride a bike, skate, walk, or catch a Lyft to a good entry point. No doubt you can think of other options too. But have a heart for the surrounding neighborhoods and don’t drive unless you have to, and park as far away as you’re able. You can bring your well-behaved and leashed pet. In fact, there are usually pet-specific activities. Definitely bring your kids, grandkids and friends. Bring money; you’re gonna want to buy something, a cool drink if nothing else (and probably something else). The sponsors of Open Streets change slightly each year, although some are core—Our Streets Mpls, Metro Transit, Blue Cross/Blue Shield. Other sponsors are specific to different streets. For this year, Franklin Avenue’s sponsors include Lyft, AARP, Geico, Centerpoint, Xcel, and All Energy Solar for the whole city, and for this event: Hope Community, Seward Community Co-op, KFAI radio station, Music in MN, and the Childrens Hospitals. Although it’s not listed as a sponsor, the Native American Community Development Institute (NACDI) is hosting an entire segment of the route called the American Indian Cultural Corridor. 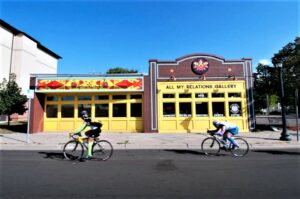 Gallery in the AICC with bikers

Open Streets have tended to resolve into nodes of activity, and last year this was made official. The hubs this year are: at Portland Avenue, Hope Community, Inc.’s celebration of family, youth and hope; from 11th Avenue to Bloomington Avenue, the American Indian Cultural Corridor (with NACDI, the Minneapolis American Indian Center, and All My Relations Gallery) featuring music, dance, art, food and more; at 23rd Avenue, Boneshaker Books featuring an interactive card game of AUTHORS that encompasses the entire route; and at 25th Avenue, the Mini East African Street Festival (with Seward Civic and Commerce Association) featuring the food, music, dance and culture of East African communities. Because of the timing of this article, none of the planning is finished in time for publication, so we can’t tell you specifics about what to expect. Hope Community, NACDI, and Seward Civic and Commerce Association did this last year, so it will probably be quite similar. 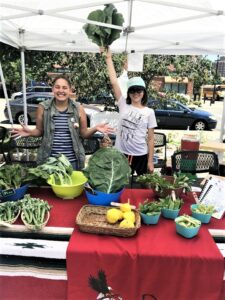 Expect Hope Community to have at least one sound stage with some up-to-the-minute music and perhaps spoken word performances. Expect kids’ art activities here and also maybe outside of Articulture farther east along the Avenue. On the American Indian Cultural segment, check out the art at All My Relations Gallery, shop at the MAIC or at Ancient Traders, rest your feet at Pow Wow Grounds coffee shop. Probably Dream of Wild Health will be selling fresh produce from the garden. There will be drumming, and powwow-style dancing, and traditional crafts. At Boneshaker, there will be books for sale, I am fairly certain. Nearby businesses Seward Cafe, Welna II Hardware and Hoffman Guitars will probably have a sidewalk sale. Maybe Precision Grind Coffee will have some music or something, but if not, it’s another good place to stop for a snack.
The East African Street Festival could be called the Ea’t African Street Festival. Try both Somali and Ethiopian fare, and then compare. Sample some coffee from the people who invented it. The Somali Museum Dance troupe will be dancing in the streets. Farther east still, Seward Co-op will be selling food along with community and food policy, and hosting other activities in front of its Creamery Co-op Cafe and office building at 26th Avenue. They are partnering with Fair State Brewing (a cooperatively owned brewery in Saint Paul), Feral Beverage Co., Sonny’s Ice Cream and Springboard for the Arts. They will also have live music; Van Nixon and Mayyadda are signed up to perform.
There will be food trucks. A lot of these, along with the information tablers, sign up in the final weeks, so we can’t tell you who they are yet. But from the Open Streets central office we did get a list of food vendors that have come on board already—besides Seward Co-op, look for Laune Bread—a pop-up and subscription microbakery; Seward Makes—a brand-new community and commercial kitchen on Milwaukee Avenue; You Betcha Kimchi; Serious Jam; Northstar Kombucha; Philly Station; Hennepin Schools—as part of the free snacks in the summer program; and Soberfish—purveyors of Thai and Japanese food on the Avenue. Also, Driscoll’s #BerryTogether Berry Truck, Pharaoh’s Gyros food truck, Fresco’s Garden food truck, and the Philly Xpress food truck. 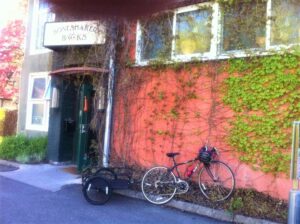 Finally, another great feature of Open Streets, especially if you’re a political junkie, is the roving politicians, wandering petition signer-gatherers, and information booths by radical organizations you have yet to know. We know that Cam Gordon of Minneapolis City Council and Angela Conley of Hennepin County (or at least their teams) will be there. And, of course, Mayor Jacob Frey cannot physically pass up a possible photo op, especially if there are also goats or pigs in the picture. (JK! We love you, Mr. Mayor.) Who else will you be able to spot? Extra points if you get into an argument with them. Also look for Extinction Rebellion to be selling their excellent artistic swag, all in service of trying to save humanity (us) from extincting ourselves. Here’s to a future where every day is Open Streets.