How the world works

In his book “The Grand Chessboard,” Jimmy Carter’s former National Security adviser Zbigniew Brzezinski wrote, with refreshing candor, “The three grand imperatives of imperial geo-strategy are to prevent collusion and maintain security dependence among the vassals, to keep tributaries pliant and protected, and to keep the barbarians from coming together.”
The vassals are primarily Germany and Japan, which, having been crushed in their bids for independent empires by the Allied Powers in 1945, have been allowed to flourish by the U.S. as long as they dance to the tune of the piper in Washington. Fifty-six thousand U.S. troops in Japan and 34,000 in Germany remind Tokyo and Berlin of the merits of keeping to the beat.
The supreme tributary state is Saudi Arabia. Ranked behind only the U.S. and China in military spending, Saudi Arabia spent $83 billion on its military in 2018, far above the $13 billion spent by its alleged adversary Iran. Saudi Arabia spends such an outlandish sum because American weapons contractors profit handsomely from supplying weapons to the Saudi tyranny, a family-based dictatorship. The Saudis shovel their oil money to the U.S., and the U.S. makes sure other countries don’t mess with the Saudis. And, since it is a tributary state, the U.S. aids such ghastly Saudi rampages as the assault on Yemen, the worst human rights plight in the world today.
For American policy makers, Iran is one of the barbarians. A barbarian country is one that upsets “stability,” a term that refers to a political context where nothing disturbs American interests.
By 1953, Iran disrupted stability and earned barbarian status by nationalizing its oil industry, thereby stripping British oil companies of their lucrative business. With the CIA in the lead, the U.S. and the U.K. overthrew the democratic, parliamentary regime of Mohammed Mossadegh and installed the dictator Reza Pahlavi. Given the CIA’s pivotal role, London had to fork over 40% of its oil concessions to U.S. companies.
By reversing the oil nationalization and hosting American companies, Pahlavi’s Iran became a tributary state that served U.S. interests. However, given popular opposition to the regime, Pahlavi erected the Savak, a secret police outfit that murdered and imprisoned its opponents. By 1979, even the Savak couldn’t stem popular revolt; Pahlavi was overthrown and the Islamic Republic of Iran emerged, led by Ayatollah Khomeini.
Iran reverted to being a barbarian, a status that persists to this day. In 1979, the U.S. imposed sanctions, harming the people but not the regime. During the grisly 1980-88 Iran/Iraq War, the U.S. actively supported Saddam Hussein—including supplying him with technology to produce chemical and biological weapons technology. And while Iraq faced no retaliation for striking the USS Stark with two missiles, killing 37 sailors, the USS Vincennes deliberately shot down a civilian Iranian airliner in April 1988, killing all 290 people on board, an act that pushed Khomeini to settle with Saddam.
Fast forwarding to today, Trump has further intensified U.S. hostility by ditching the nuclear treaty, the Joint Comprehensive Plan of Action (JCPOA), and imposing the harshest sanctions to date—even though Iran has abided by the treaty’s main provision of not producing nuclear fuel and the rest of the world wants the treaty observed.
Given steady U.S. hostility, it’s not surprising that Iran would seek a way to deter a U.S. attack, a pursuit reinforced by the fact that it’s common knowledge that the U.S. feels free to attack countries that can’t deter American might. Iraq and Libya are recent examples. Asked about Iran’s alleged nuclear program, veteran Israeli military analyst Martin Kreveld raised eyebrows in Tel Aviv and Washington by replying, “Had the Iranians not tried to build nuclear weapons, they would be crazy.” On June 14, 2019, The New York Times inadvertently boosted the rationale for the North Korean nuclear program and a potential Iranian one by noting that, “North Korea already has nuclear weapons, giving it leverage Iran can only imagine.”
If possessing nuclear weapons seems a potent way of deterring attack, why did Iran agree to the JCPOA? One reason is that its leaders expected an American and/or Israeli attack on its nuclear facilities before they were fully operative. And there’s precedent for this. In 1981, American-supplied Israeli warplanes wiped out the Osirak nuclear plant in Iraq, even though this plant proved to be a civilian research facility. Ironically, the attack then pushed Saddam Hussein to start a secret nuclear weapons program.
Another reason Iran signed the treaty stems from an unintended consequence of George W. Bush’s aggression against Iraq in 2003. By crushing the Sunni regime and dissolving the army, Bush provided space for the Shiite majority to take power in Baghdad. Many of its leaders had previously found refuge in Shiite Iran; they returned to Iraq to assume positions of power in the state. So, Bush’s sledgehammer morphed into a boomerang that spread Iranian influence in Iraq and beyond, to Syria and Lebanon. 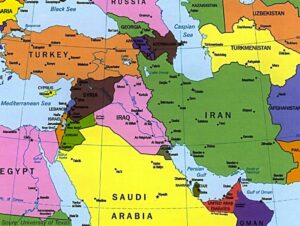 It ought to give warmongers in Washington, like National Security Council boss John Bolton, pause that U.S. aggression succeeded in fostering Iranian “strategic depth.” That depth furnishes Iran with means other than nuclear weapons to inhibit U.S. and Israeli military action. For example, Iran’s ally in Lebanon, Hezbollah, can fire tens of thousands of rockets into Israel, enough rockets to overwhelm Israel’s missile defense systems.
Finally, Iran has enough military power to curtail the flow of oil tankers as they move through the Strait of Hormuz into the Gulf of Oman. Given that one-third of the world’s daily oil shipments pass through the strait, a major blockage would send oil prices soaring and the world economy into a tailspin.
Nonetheless, no one can guarantee that a terrible war won’t occur. And if the alleged Iranian nuclear program is billed as the source of a conflagration, it’s vital to point out that mainstream media have mostly ignored covering other approaches to checking the nuclear menace in the Middle East. The most important nuclear treaty, the Nuclear Non-Proliferation Treaty (NPT 1970), requires periodic review conferences to foster the goal of stopping the spread of nuclear weapons. In a 2015 run-up meeting to a conference, Iran agreed to participate in making the Middle East a Nuclear Weapons Free Zone (NWFZ).
Dismayed by Iran’s willingness to create a NWFZ, Obama refused to attend the meeting, squelching this progressive step. U.S. opposition was no mystery: A Middle East NWFZ would have required Israel to open up its nuclear complex to international inspection and eventual dismantling. But Israel is a prime U.S. ally, and its nukes hover menacingly over conflicts in the region.
Also, mainstream media should remind the American people that Article 6 of the NPT requires that countries that possess nuclear weapons must make good faith efforts to eliminate them. If they don’t, countries that have committed to forgo nukes come to regard the treaty as a ploy by the possessing countries to maintain a monopoly on the weapons, a monopoly that confers an added source of intimidation—or worse.
Recently, Donald Trump threatened to destroy Iran should it threaten U.S. interests in the Middle East. We must note that Article 2(4), of the United Nations Charter requires that, “All Members shall refrain in their international relations from the threat or use of force against the territorial integrity or political independence of any state.” Since the United Nations Charter has the status of constitutional law, Trump, by violating the Constitution, has committed a grave impeachable offense.
Through a long and tortuous process, a body of legally-binding international law has emerged; it demands that peaceful and mutually-binding means be used to rid the world of nuclear weapons. Given the Trump administration’s disdain for international law and the emergence of tanker attacks that echo the “fake news” of the 1964 Gulf of Tonkin incident, the peaceful resolution of issues with Iran requires an informed, ever more vigilant, and active American citizenry.