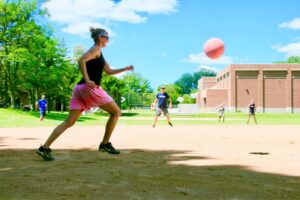 The last Saturday in July was sunny with temps in the lower 80s, a rare perfect summer day. In East Nokomis, it was also a perfect afternoon for a new event, a neighborhood kickball tournament. Six teams faced off at Keewaydin Park’s baseball fields, vying for a trophy and bragging rights as top kickball athletes.
The contest was a fundraiser for the Nokomis East Neighborhood Association, raising money to repair the Bossen Community Mural on 58th Street; to install new bike racks; and to wrap local utility boxes with art photos of the area. But the games were more than that. It was a chance for people to come together for some fun.
Teams paid a $50 registration fee and NENA sold beverages and burgers to raise extra money. Players had to be at least 15 years old but did not have to live in the area. Teams needed to have at least eight players, but most had more.
“We had a good turnout,” said Liz Brophey, NENA’s vice chair, as she sat in the shade, selling snacks. “People are having a good time. We have six teams with more than 60 people participating. Some teams are actual regular teams and some are just groups of friends who came out to play for today.”
“We all played this game as kids, in middle school,” said Adam Somers, a board member representing the Wenonah neighborhood, who served as a referee. “It’s a back and forth game and brings us back to our childhood roots.”
Kickball is similar to baseball but instead of baseballs and bats, a pitcher will toss a large red rubber ball across home plate and the “batter” will try to kick it and attempt to run the bases before being tagged. The tournament was organized so that each team played at least three games, more if they moved into the playoffs.
Jeremy Mabis-Rowe and his husband, Corey, members of the Stonewall Sports-Ballers, a GLBT team, brought along Tyson, an 8-year-old shar-pei dog, the unofficial team mascot, who watched the games as he lounged on the nearby grass.
As with the other teams, there are no tryouts to be on the Stonewall Sports Ballers, one of 16 regular teams in the GLBT league. “My favorite part is taking the competition out of sports and focus just on having fun. It’s not just about winning. But, it’s a way to meet people and to socialize.”
Across the park, playing on another field, were the Crosstown Kickers who lost to the Nokomis Tattoo Hot Stuff, one of two teams sponsored by Nokomis Tattoo. Later in the day, the Hot Stuff faced off in the first round of playoffs against the Nokomis Tattoo Devils, beating the Hot Stuff in a close match.
Other teams in the competition were the Kick Drums, (their motto: All about the “base’”) and 2 Legit to Kick.
In the final game, the Stonewall Sport-Ballers defeated Nokomis Tattoo Devils, winning the gold trophy and bragging rights until next year’s tournament. But the big winner was the Nokomis East Neighborhood Association, which managed to raise more than $800 in registration fees, food sales and donations. “The event was a success, especially for our first year of doing it,” said Somers. “It was a great first year to build a base. We had six teams, and I believe they will all be back next year and we will get more.”
“A few people even asked our vice chair, Liz Brophey, how many years we have done this event. It is always refreshing to hear a compliment like that for a first-time event,” he said.