For many, Lyndale Avenue is just a quick way to get from point A to point B in South Minneapolis. What a lot of people don’t know is that there are places along the way where you can find music, laughter and a chance to learn about new and interesting diversions. Slow down a bit and you’ll discover these places. 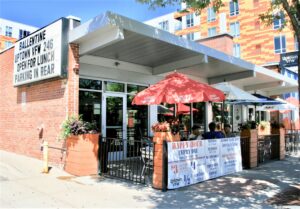 Rock ‘n’ Roll and More
James Ballentine
VFW Post 246
2916 Lyndale Ave. S.
Forget your outdated idea of a VFW as a dimly-lit bar (with ham sandwiches) located in some third-ring suburb. The James Ballentine VFW Post is a perfect fit for the Uptown groove. “It’s not your typical VFW,” says manager Paul Diets. “It’s more than just a stuffy old bar.
“We got a restaurant, live music, dance parties and charitable gambling,” he says. “We have three bars—one if you want to dance, one if you want to watch a game, and another quieter, more traditional blue-collar bar. On a typical weekend night, we can get 300 people over the course of an evening.
“It’s a very Uptown place,” he says. “Most of our customers come from areas about five miles around, but we do get some of the people who come here from the far suburbs, for the music.”
The music can vary. Bands and DJs offer rock, punk, country or hip-hop. Dancing is encouraged. Every third Tuesday night there are free comedy shows with drink specials.
The restaurant’s extensive menu offers choices from the traditional deep-fried cheese curds or tater tots, to swankier selections like the Whiskey Bacon BBQ Burger, the Cuban Sandwich and the all-American breakfast poutine (crispy fried potatoes topped with scrambled eggs, deep fried cheese curds, pico de gallo and sausage gravy) served all day. There are several vegetarian choices, too. Desserts include cheesecake and tiramisu.
The drink menu options — beer, wine, the hard stuff and sophisticated cocktails — are available at reasonable prices.
The VFW is available for all kinds of events, from weddings to corporate lunches. The Post also supports local charities, opening for Sisters’ Camelot food giveaways and clothing drives.
The biggest draw is the nightly karaoke, from 9 p.m. until close, with music from all generations. “Karaoke draws large audiences. Business was looking dismal and then, four or five years ago, we started karaoke. It saved the Post,” says Diets.
You don’t need to be a member or a veteran to join in with the fun. The only restriction is that after 7 p.m. on weekdays and 8 p.m. on weekends, the club becomes adults only. Kids are always welcome for breakfast, lunch and early dinners.
Look for the American flag mural on the front of the building. There’s plenty of parking in the back. 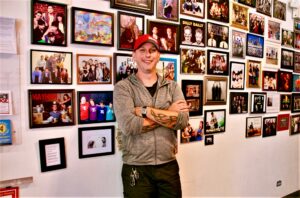 Rolling with Laughter
HUGE Improv Theater
3037 Lyndale Ave. S.
HUGE Improv Theater is famous with local stand-up fans for its improvisation comedy shows, where audiences can find hilarity for as little as $8 (more for double features).
The HUGE Theater was founded almost nine years ago, when Butch Roy, one of the founders and now the executive director, first stepped on stage. “I started in scripted theater,” he says, “but it just didn’t speak to me.”
Improv did. In 1996, he found his true vocation, and soon became the technical director at the Brave New Workshop. From there, he founded Improv A Go-Go, still showcasing local and national talent, and then, the Twin Cities Improv Festival, held each June. The name of the theater, HUGE, was tongue-in-cheek. “It looked good on posters. We could say, ‘It’s a huge production,’ ” he says.
While hugely entertaining, the HUGE Theater is more than an entertainment venue. It’s also a training ground that gives entertainers a chance to appear onstage to hone their craft. HUGE’s 10-week workshops graduate up to 200 improv students a year. Who are these people?
According to Roy, a lot of their students are the people who initially say, “I could never do that.”
“These are the very people who will benefit and who will end up loving it,” he says.
“So many adults start out with assumptions that things will go wrong. These classes are for people who feel uncomfortable with the unknown,” he says. “But, improv opens up a sense of possibilities, so instead of considering what could go wrong, you learn not to be afraid. In the end, we see those same people who were hesitant, now unencumbered by fear.”
“This new attitude,” says Roy, “can help people in all aspects of their lives—work, social circumstances and relationships.” He admits that it requires a little bravery, at least at first. But, he says, “Everyone can find something in doing this.”
There are no tryouts for the 10-week, $220 workshops. Beginners start with Improv 101. From there, students can take classes to learn how to create character or do scene work. The next set of workshops starts just after Labor Day, but there are usually waiting lists. There are also weekly drop-in classes with no preregistration required.
HUGE also offers Teambuilding and Creativity Classes for businesses and organizations, using improv techniques to build confidence and creativity.
For those who don’t want to be on stage, check the website for shows and show times. Life can be hard. For that, laughter is a good thing.
www.hugetheater.com 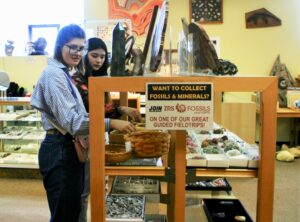 Rock Out!
ZRS Fossils and Gifts
3018 Lyndale Ave. S.
Looking for a gift for your favorite rock or fossil hound? Hoping to find the perfect crystal for meditation or balancing your chakras? ZRS Fossils and Gifts has what you need. They also have beautiful carvings, décor and handmade jewelry featuring colorful and glittery semiprecious stones.
The 4,000-square-foot store is welcoming, sunny and elegant. Their stated mission: To share the beauty of the rocks and minerals on Planet Earth with others who understand, or want to understand, that beauty.
ZRS’s biggest sellers are crystals and polished rocks, but fossils are popular, as well. There are some impressive fossils, interesting enough to bring people into the store. In one corner, there is a full-sized skeleton of a young cave bear they’ve named Boris. You can find examples of ancient petrography, too.
The owner, Kelly Lund, is a paleontologist and geologist, who leads collectors’ tours throughout the Midwest and beyond. For those with the time to spend, expeditions include 16-day trips to Morocco or Australia, where enthusiasts can collect their own rock or fossil treasures. 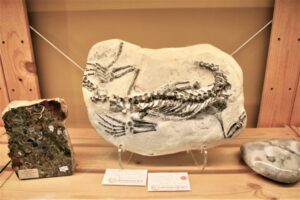 Fossils, large and small, are available at ZRS Fossils and Gifts

The next trips include “Rockin’ in Morocco” and “Collect Badlands Fossils and Black Hills Minerals,” both in October. Closer to home, the shop gives classes in a variety of subjects, including lapidary and crystal spirituality, with learning opportunities for those wanting to know about more personal healing.
One new customer came in on a late morning when she and her friends were waiting for the restaurant next door to open. “I didn’t know this place was here. It’s like a huge museum,” says Rachel Grestock, surprised. “My grandmother is an artist who does jewelry with polished rocks and minerals,” she says. “I’m going to have to bring her in. She’ll love this.”
Dogs are welcome at ZRS. Come often and the staff will soon know your dog’s name. The store also supports animal charities. 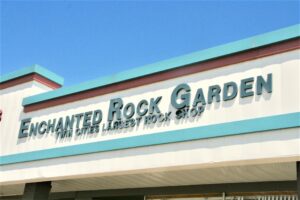 Rock On!
The Enchanted Rock Garden
6645 Lyndale Ave. S.
On the other end of Lyndale Avenue, in a small strip mall, is The Enchanted Rock Garden. The store has been at the current location since 2001, serving generations of rock and fossil enthusiasts. The shop is somewhat chaotic and jumbled, welcoming and fun, crowded with rocks, fossils and beautiful crystals that some say have healing powers.
Owner Pete Giangrande has been a mineral fan since he was a young child, bringing rocks home from a neighbor’s garden. He’s a fan of fluorescents, large crystals and “English minerals”—the essential minerals found in foods.
Mary John is one of the people to see if you want to learn about other kinds of healing minerals. She helps her customers find just the right healing crystal, one that has a personal connection, and can show how to use them effectively.
Everyone who works at the store is friendly, knowledgeable and eager to help customers, from beginners to experts. Some of their customers have been coming in since The Enchanted Rock Garden opened for business.
When already-seasoned rock collector 8-year-old Cam arrived from Prior Lake with his mother, Katie, he was clutching three months of savings, hoping to find just the right rocks to purchase. Bob Metzgar, a mineral expert, was there to help him. Cam got involved in his hobby through his first-grade teacher, also a rock and fossil fan. When he grows up, Cam says, he would like to be a paleontologist. (Metzgar got involved through his children.)
“This piece of lapis is the same kind of stone used for King Tut’s mask,” Metzgar tells Cam, holding up a deep blue rock. “It’s a stone that has represented royalty for thousands of years.”
“This agate,” he explains, as he holds up another large segment of translucent rock, “is from Brazil. And this one is called an angel agate because it looks like it has angel wings.”
The Enchanted Rock Garden has an impressive choice of fossils from the inexpensive ones to those costing several thousand dollars. “That one is an ancient herring fossil, found in Wyoming,” Metzgar says, pointing to an imbedded fish. (It isn’t, he jokes, pickled herring.)
Keep your eye out for the 4-foot-tall amethyst crystal near the front door. And, bring your youngest rock hounds in for their choice of a polished stone from the “treasure chest.” They’re free for kids.