BY ELAINE KLAASSEN
In “Mennonite values in a warming world,” David C. Garen articulates spiritual guidelines for living on the Earth. (The piece was printed as a “web-exclusive” for themennonite.org.) Garen is a retired hydrologist who spent most of his professional career with the U.S. Department of Agriculture and the National Weather Service, and is a member of Portland (Oregon) Mennonite Church.
He talks about four Mennonite values that can critique our current system; diagnose causes of the climate situation; and “envision responses.” They are: Simplicity, Community, Justice, Peace.
Garen talks about them from his own personal experience and cultural knowledge; they are of course not exclusive Mennonite property.
Simplicity.
“This is the value I believe is most pertinent in addressing climate warming and other environmental problems. …
“We must recognize … that all consumer goods coming from our system have an embedded carbon and environmental footprint in the materials used in their manufacture, their shipping and the energy used to operate them. ….
“The ethic of simplicity is needed as a guiding consumer principle along with a commitment to following this principle even if it causes some inconveniences or leads to doing without. ….
“Many still look to technology to solve climate warming and other environmental problems, … The ethic of simplicity should lead to a more skeptical view of technology, more caution in preserving what is good before adopting new technologies, and more willingness to have modest lifestyles and consumer behavior rather than looking for technological fixes to enable maintenance of our existing system and lifestyles.”
Community.
“A strong sense of community leads one to think beyond just individual concerns or even those of one’s family and friends and ultimately to widen the circle of consideration to include all people in the world as well as the earth itself. Climate warming now requires such a global conception of community. …
“So even though our capitalistic system and consumer culture are based on the idea that purchasing decisions are purely a matter of individual choice, in reality every purchase has environmental and social impacts, many on a global scale.”
Justice.
“It is tragic to realize that nations and future generations that have contributed little or no carbon emissions will be the ones most affected by climate warming.” …
Peace.
“Climate warming and environmental degradation are symptoms of humans committing violence to the earth and not living at peace with it. This violence is inherent in our current system. It stems from a worldview that considers humans separate from nature and the world as a machine, an object of human domination and control, and a pool of resources to be exploited for human desires.” …
At the end of Garen’s article, this sentence stands out:
“This level of critique and response is needed to find real solutions … rather than treating only symptoms with technological fixes or a few simple personal actions and leaving the system essentially intact.” 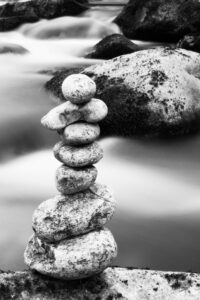