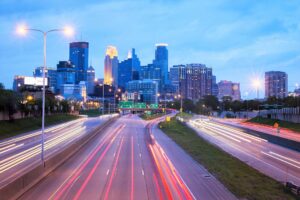 It’s that time of year again: The State Fair is upon us, and after that, those of us who are between the ages of 6 and 18 get to go back to prison for the next nine months. It’s also time for one of the four annual Metro Transit service changes. Let’s see what’s in store for the Southside Pride readership area this time around. And as an added bonus, I’ll mention a few big changes in other parts of the Twin Cities.
In the Southside Pride readership area as of 17 August 2019:
• Route 2 allegedly gets an extra morning trip, but we don’t know when, as no new schedule was published.
• Route 5 goes southbound on 6th Street instead of 8th Street, and a few rush-hour trips are being eliminated.
• Route 21 will lose a few rush-hour trips, but some 21E trips—the ones ending by the Aldi that used to be Rainbow—will be extended to 21D trips, which cross the river to Saint Thomas University.
• Route 22 loses one trip in each direction in the morning rush hour.
• Route 46 will have some minor adjustments.
• Route 53 loses one early morning trip.
• Route 74 loses one early morning trip from the Maplewood/Oakdale border to 46th Street Station.
• Route 94 loses one trip in the morning rush hour.
• Route 111 will have minor adjustments.
• Route 118 will have new stops added in the Dinkytown and Marcy-Holmes neighborhoods.
• Route 133 loses a few rush-hour trips.
• Route 156 loses a few rush-hour trips.
• Route 365 will lose one afternoon rush-hour trip.
• Route 553 loses an early morning trip.
• Route 554 loses an afternoon rush-hour trip.
• Route 579 will have some minor adjustments.
• Route 663 will lose an early morning trip.
Notable changes outside the Southside Pride readership area:
• The homeless are out of luck. The Green Line now shuts down from 2 to 4 a.m. on weekday mornings.
• Route 614, a suburban crosstown in Minnetonka, goes bye-bye for the last time.
• People in South and West Saint Paul who get up early on weekends are in luck; route 68 has new trips to accommodate them!
• No more hanging out in Wayzata till midnight—unless you have a car: The last 645 of the night is now eliminated. Wayzata hasn’t gone back to being a “sundown town,” but you better leave by 10 p.m. or be stuck there all night …
Most of the trips that have been cut are due to a shortage of bus drivers. Starting pay has been raised to $20.44 an hour. If you’re looking for a job and can handle people and traffic, it’s your lucky day …
As most Southside Pride readers know, I also write for the Alley, and I try to come up with different things to say in each paper, so as not to bore those of you who read both. I also read transit blogs on the internet. Two of my favorites are the Seattle Transit Blog and Human Transit. Jarrett Walker, a professional transit consultant based in Portland, Ore., is the creator of Human Transit, and someone I credit with changing some of my beliefs about transit. From about 1980 to 2013, I advocated restoring the routes and schedules in effect in 1970, ignoring the fact that cities grow, new destinations get built, old destinations disappear, and travel patterns change accordingly. Then I started advocating appropriate service to maximize ridership but still ignored the value of “coverage” service, which is designed to make sure transit reaches everyone, even in areas where few people use it. Recently, I’ve finally woken up to the fact that coverage service is a legitimate necessity due to the political nature of modern transit, which is run by government agencies and not private, for-profit companies. As I mentioned last month, Republicans in the Legislature who represent rural Minnesota and the outer suburbs and exurbs feel too many things, including Metro Transit, are too Minneapolis-centric. Coverage-based bus service to these outer suburbs helps ensure that Metro Transit is considered useful by these politicians and their constituents, which then enables adequate funding for service in the inner cities, too. That’s why losing a route like the 614 is so tragic. Sure, only a few dozen people a day used it, but now the politicians in that area have one less reason to care about transit, since it doesn’t do them any good.