The case for lidding our highways 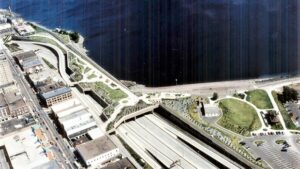 As Minneapolis becomes increasingly urban, more of our residents will live in apartments with little access to green space. The dynamic and rhythms of our city will change drastically. The great changes we are about to face could also be seen as a chance to see possibility where we once may have accepted the status quo. Let’s talk about lidding parts of our highway system.
Lidding a highway is when a top (or lid) is built over a roadway or other sunken feature to create an entirely new level of usable space. Most often parks are installed in these situations. Seattle is in the process of lidding Interstate 5, and Chicago’s Millennium Park was created out of a similar situation (https://lidi5.org/).
The city would benefit from this project in a number of ways. The land above the interstate could be planted with trees, prairie plantings and/or rain gardens, which would all both sequester carbon and provide habitat to a great deal of wildlife. If we could cover large portions of our highway system with carbon-capturing plantings it would contribute significantly toward the carbon capture that needs to happen to avoid the most catastrophic climate change.
This land would also provide potential space for community gardens. Those living in food deserts could have access to fresh fruits and vegetables not possible now. It is also something that the city should look at as part of a pathway to a resilient future, as we face disruption of our food systems from climate change. 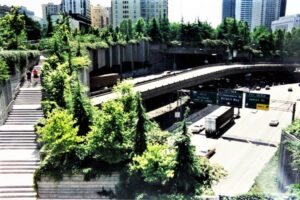 As recreation and green space, the lidded area would offer the people in Minneapolis a chance to experience and interact with nature.
Finally, lidding would reconnect parts of the city split by the highway. Anyone who has ever walked across a highway pedestrian bridge or along the sidewalk of an overpass is familiar with the heat, noise, and generally unpleasant nature of such a jaunt. Lidding the freeways would increase the potential width and frequency of access points between neighborhoods separated by highways, while also making such trips more attractive to residents.
Doing this will improve the livability of the area and will be an important tool if the city wants to improve non-motorized forms of transit.
All of this would of course be massively expensive and no one is going to fund it today, and the way the city operates, it would probably just sell off any newly-created space to the highest bidder. But one thing I have learned from the Minneapolis 2040 Plan and conversations around it is that there is an interest from the city and from a vocal and active group to take drastic and serious action against climate change and toward a resilient future.
Lidding would accomplish great things for our city of the future, if we just put some thought and resources into its development. 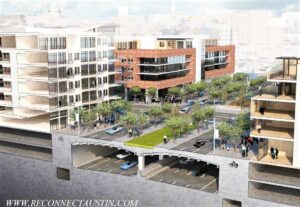 The grassroots group Reconnect Austin has proposed this plan to reclaim a downtown area deadened by I-35.