Since 1956, Everett’s Food and Meats prove trendy has its limits and excellence does not

Jack Pflepsen is the man behind the South Minneapolis iconic grocery store, Everett’s Food and Meats

Everett’s Food and Meats is a small neighborhood grocery store in the heart of South Minneapolis. It’s been there forever. As with many little grocery stores, you can get your standard items—chips and dips, beans, rice, frozen dinners and a small selection of fresh produce. You can also find a decent selection of gluten free, organic and local items.
But, that’s not what brings in customers from far-flung Eden Prairie and Edina and from nearby Powderhorn and other local South Minneapolis neighborhoods. The big draw is the meat department. Everett’s is a throwback to a time when customers knew the name of their local butcher and vice versa and where you could get whatever meat cut you wanted by just asking.
The meat counter is celebrated among local foodies because of one man. That man, owner Jack Pflepsen, has been behind Everett’s meat counter for 64 years. That’s not a typo. He’s still cutting meat and serving his customers at age 90. Because of his age, he’s cut back on his hours, now working only five or six days a week, five or six hours a day, going home at about 3 o’clock in the afternoon.
The grocery section remains in the family. His daughter, Nancy Klatke, manages the grocery section of the store, taking care of the business end—purchasing, promotions and day-to-day operations.
Pflepsen got his training early. His family—his father and three brothers—were in the meat business and, “I just picked up the trade by watching and doing,” Pflepsen said. He served in the Quartermaster Corps in the Korean War, supplying meat to hungry troops. Coming home he found jobs at Blue Ribbon Foods on Hennepin Avenue and later at other popular butcher shops, now all long gone.
Then, in 1956, he saw an opportunity. He bought the grocery store from his brother, paying in installments. “It had a small butcher section. We’d bring in quarters of beef and make sausage and wieners.”
From the beginning, Pflepsen started to make changes. He remodeled the store, expanding the meat section and his customer’s choices. The shop now has a a smokehouse and his crew makes their own summer sausage, turkey and beef jerky, cheddar beef brats and a variety of grilling sausages.
You can also pick up homemade bologna, smoked ribs, beef sticks and a ready-to-pop-into-the-oven meatloaf. His bratwurst goes back to a recipe his father created in 1905.
When the shop opened, the meat would arrive in beef quarters, 150 to 180 pounds. each, that needed to be carried in and cut into steaks and roasts. “Now, we just cut the loins, the ribs. Everything is boxes and ready to go,” Pflepsen said. This is much easier for the butchers, but customers still get their choices. At Everett’s, ask and you shall receive. “Rib eye steaks are one of the most popular choices,” Pflepsen said. The beef comes from free-range animals from Minnesota, Wisconsin and Iowa.
Pflepsen doesn’t work alone. His team of butchers are as devoted to the business and the craft as he is. Evan Pregler, who is the meat department buyer and co-head butcher, started at the shop at age 15 and is still there, 17 years later. Harrison Wood is the newest hire, working at Everett’s only a few months, replacing a long-time employee. “I was lucky to get the opportunity,” Wood said. He got a tip about the job at his local labor union. “I came in to Everett’s, talked with them and then they hired me.” He, like his boss 65 years ago, is learning by watching and doing.
Customers, too, are loyal to Everett’s. Pflepsen says he’s seeing the children and even grandchildren of the same customers who have been coming in for decades. 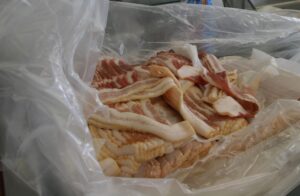 Bacon from Everett’s own smokehouse

“A lot of people come for sausages, the specially-aged steaks and the double smoked thick-cut bacon,” said Pflepsen. The staff is friendly and helpful, fulfilling customer requests with a day-brightening smile.
Pflepsen refuses to abandon the old-fashioned traditions that bring in new customers and keep the old customers returning for years, but he is not afraid of changing with the times. He’s remodeled his grocery store six or seven times. And recently, he’s started carrying specialty meats for Ethiopian customers. At Everett’s, you can find camel, injera and a special extra-lean beef to make kitfo, an amazing and treasured Ethiopian dish of raw chopped beef mixed with spices and warm butter.
Another new product, requested by customers, are the T-shirts and caps featuring the shop’s logo. “Everett’s Foods—since 1956.”
Everett’s was voted “Best Meat Shop” by City Pages and received raves from KARE-TV and The Growler. James Norton, of the online publication Heavy Table, called their meatloaf “nourishing, full-flavored, herbally seasoned meaty classic goodness.” Online, the shop receives nothing but raves. And, it’s right there, where you’ve always seen it, at Cedar Avenue and 38th Street, as you drive by. It’s decidedly untrendy, but you should stop and go inside. Everett’s is proof that sometimes, old-fashioned is better (much better) than chic.