You won’t believe what happened when we tried to investigate Chicago Avenue! 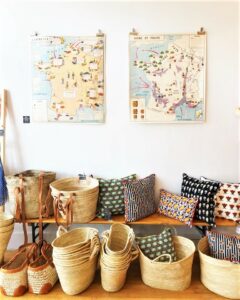 Baskets and textiles at
Flotsam+Fork

(Yeah, we’re hoping to sell this piece to BuzzFeed later.) But seriously, this is no joke. We were calmly and methodically doing our research to spotlight two upmarket small businesses and three long-standing nonprofits on Chicago Avenue when—BOOM!—one of the nonprofits, a 17-year-old, high-visibility presence in the neighborhoods, announces that it’s closing down in less than a week, before this story even comes to print. So now, they are the story, sort of. And in true BuzzFeed fashion, keep reading to find out more … 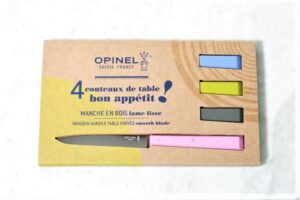 Starting with the small businesses. Both of these are part of the developing (and upscaling) business hub at the corner of Chicago and 38th Street. First up, Flotsam+Fork. Although barely over a month in her new space at 3730 Chicago Ave., owner Adrianna Fie and her business have been around for at least six years. Fie is passionate about traveling, design and cooking, so of course the core of her retail business—at first online and now with a physical location as well—is beautifully designed wares, mostly kitchen tools, sourced from artisans and small manufacturers abroad, mostly Europe. We visited the shop a couple of weeks ago, determined NOT to buy any more kitchen gadgets, and managed to make it out the door with nothing more than a small, elegant, Parisian paring knife, a net shopping bag in tricolour colors, and a cotton tea towel with soft pastel stripes. Warning—this shop is not for frivolous people. These are serious goods here. Prior to opening her first brick-and-mortar, Fie did pop-ups at places like St. Genevieve, where one would expect to find connoisseurs of French design. The online store is still open for business too, if you want to dip your toe in that way, at www.flotsamandfork.com, where you can also sign up for an online newsletter. I don’t really approve of the name, by the way, but I suppose it’s too late to change the brand now. Flotsam, often associated with jetsam, is the term for goods that have fallen off a merchant ship and are floating. (Jetsam, by contrast, has been deliberately “jettisoned” from the ship.) In England, “fell off the back of a truck” is a way to describe shoddy or of doubtful provenance goods, so why would you want to invoke that image for carefully curated things? And the one utensil I didn’t see a single example of in the shop was the fork, paradoxically invented by the late medieval French. But be assured, these products are not flotsam in the least.
The other business at this corner is not quite so new, but is so low profile that we only very recently discovered it. At 730 E. 38th St., right across from the bus stop for the eastbound #23 bus, is the Goodridge Offices building, which sports a plaque identifying the upstairs space as New Movement Pilates. There is no reception area and the door is locked, so this sign is the only clue that there might be some Pilates going on up there.
Pilates, as I know from being a former student, comes in two main flavors—mat and reformer. Mat is what you would expect—done on a mat on the floor, like yoga. Reformer is done using machines similar to, yet quite different from, the weight training and aerobics machines you might see in a more mainstream fitness studio. I have not yet experienced reformer Pilates, but I am saving up to do so. It’s especially meant to be beneficial for people who are injured, older, out of shape, have physical limitations or have neurological conditions. 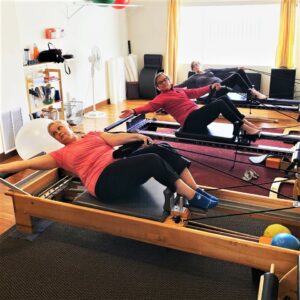 The founder, Joseph Pilates, was a German of Greek extraction who emigrated to England as a very young man. Pilates was a sickly boy, suffering from asthma and rickets, and began to develop his training system, which he called Controlology, to build up his own health.
Interned by the British as an enemy alien during the first World War, he trained fellow internees, and developed the rudiments that led to the reformer machines by reconfiguring the prison beds of bedridden inmates. Pilates eventually moved to New York City where he hooked up with George Balanchine and other famous dancers, so that the Pilates method became closely associated with dance. In addition to dance training, Pilates incorporates wisdom from yoga, wrestling, body-building, gymnastics and circus acrobatics, boxing and martial arts. New Movement Pilates is the South Minneapolis half of a two-studio business, with owner Kim Taraschi’s home in Eagan housing the other one. You can get more information either from their Facebook page or www.newmovementpilates.com.
OK, the suspense is killing you. Unfortunately, the nonprofit that has closed was Urban Arts Academy, a very ambitious arts education project for neighborhood school children that had been in operation since about 2002, starting as a mission of Calvary Lutheran Church at 3901 Chicago Ave. We have not been able to check in with the leaders of UAA, since the shutdown was so sudden and not timed well for our publishing schedule, but there is evidence that a fundraising drive to raise a mere $1,000 was unsuccessful, and this led to the demise of the organization. If you keep up with the Twin Cities scene at all, you know organizations like this—both arts education projects and the smaller, non-governmental youth services—have been dropping out of circulation across the cities and indeed the country. So, it’s not a huge surprise. Personally, I think their model was just not sustainable. If they followed the charity fundraising route, there is a lot of competition in that space. Also, the church that gave wings to the UAA is undoubtedly shrinking and aging as are most medium-sized, urban Protestant churches, and the population of families they served is very precarious economically.
As though standing by, another nonprofit, the Southside Village Boys and Girls Club is just across the road, at the southwest corner of 39th and Chicago in the Rec Center of Phelps Park, and offers art activities along with a mix of other services to the exact same population. 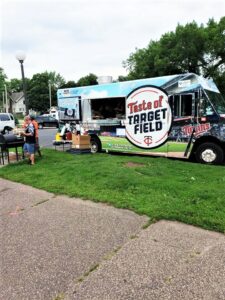 This is the only non-school-based B&G Club in South Minneapolis. It’s a year-round program, but it’s really big in the summer, when it fills a food gap for kids receiving (or in some cases probably needing) free school lunches. (Relevant data point—according to its website, 10 percent of Boys and Girls Club families are homeless!) In addition to arts and sports programming in the summer, B&G Club offers free breakfast and lunch all weekdays. This summer, the lunches were served from visiting food trucks, a nice grown-up experience for the kids. The program is on a brief shutdown between summer and fall just now, with fall programming starting next week. Also, some time in the fall, the long-awaited construction for park facility improvements begins at Phelps, which will probably also involve some shutting down.
Z Puppets Rosenschnoz is a 21-year-old, artist-driven, arts nonprofit at 4054 Chicago Ave., less than two blocks away from UAA and the B&G Club. Founded by former street performers Shari Aronson and Chris Griffiths, and employing many of the same artists associated with In the Heart of the Beast and other arts organizations (and all of them are struggling to some degree), Z Puppets had a nice moment this summer when they were the keynote performance for the National Puppetry Festival in Minneapolis with their award-winning play “Cellula.” In the Heart of the Beast’s struggles and triumphs have been well-covered by Southside Pride. But a timely update: Although, sadly, the reprogramming at HOBT did away with the popular Saturday Puppet Matinees for Kids, some of the same artists and shows will be featured this fall at Midtown Global Market as part of its Thursday night Neighborhood Nights. First up, Sept. 12 kicks off with the popular “Martina the Cockroach and Perez the Mouse,” a bilingual take on a folk tale from Puerto Rico and Cuba, presented by Gustavo and Julie Boada, followed by a Make-and-Take workshop. On Sept. 26, it’s just a two-hour Make-and-Take with author and artist Anne Sawyer in the Monster Puppet Workshop. These shows start at 5 p.m. The last show will be Dec. 12, featuring Laurie Witzkowski in the wildly popular “Way of the Monarch.” 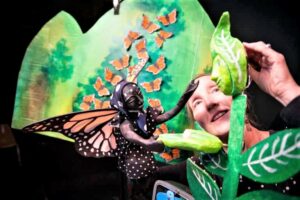 Laurie Witzkowski in “Way of the Monarch”

The last nonprofit we are highlighting is the venerable and well-respected Walk-In Counseling Center, whose original location on the 2400 block of Chicago Avenue is still going strong and about to celebrate 50 years of service. Walk-In Counseling has two other locations now, both in Saint Paul. It is completely free, and truly walk-in, although nowadays its hours are somewhat restricted. You can get more of a flavor of the place and more details if you think you may need their services at their website www.walkin.org or their Facebook page, where they have nearly perfect ratings from 16 clients. Here’s an edited history excerpted from the website:
“In 1969, the social and political unrest of the day spurred a group of young psychologists to form Psychologists in Social Action through the U of M. A radical idea out of that group was to start a free mental health clinic with no red tape, meaning free, anonymous and no-appointment needed during clinic hours. In a house on Chicago Avenue, then shared with the Teenage Medical Service, Walk-In Counseling Center was born. In our early years we served mostly troubled youth who experienced domestic violence, trauma, sexual identity issues, and drugs and alcohol use … We now serve primarily adults—60 percent are between 21 and 40—and older teens (15+), who have social and emotional challenges which prevent them from effectively managing their lives; couples whose relationship issues have de-stabilized their personal functioning; and Spanish-speakers, most undocumented, who have limited access to such services.”
On Saturday, Oct. 12, starting at 5 p.m., Walk-In will be having their biggest party ever to celebrate their 50th year of serving the community. You can buy tickets now for this event at St. Mary’s Greek Orthodox Church/Lake Calhoun Event Center on beautiful Bde Maka Ska! “It’s a gala for all, a reunion for current and former volunteers, and a fundraiser for our future! We’ll have a silent auction, historical exhibits, a sit-down dinner, and lots of stories about Walk-In. Be ready for laughter and tears, fun and fellowship. We’ll even have historical fiction by a local improv team.”