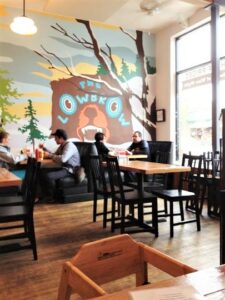 We attended the Open Streets on Franklin Avenue a couple of weeks ago and man, there were a LOT of scooters. Scooters were a novelty rarely seen just last year at Open Streets. During my one-week visit to Atlanta this year in early August, that city was awash in scooters and I thought maybe the Twin Cities were falling behind. But Open Streets convinced me otherwise.
Sept. 22 will see Nicollet Avenue’s Open Streets, and I expect it to be more of the same. Another thing I saw at Franklin Open Streets—with the entire width of the street plus two large sidewalks to use, a lot of pedestrians were walking in the bike lanes! But that’s fine because people were riding bikes on the sidewalks. I just don’t know what’s wrong with some people. Please don’t do these things. But do—download your free Metro Transit day pass from the Open Streets website, go to Nicollet Avenue Open Streets, and have fun staying safe while learning about all manner of transportation alternatives and local small businesses.
Nicollet Avenue’s Open Streets is a bit different in that it’s one of only two Open Streets that is organized and hosted by the neighborhood organization rather than OurStreets.MN. Or rather, plural organizations, in this case, Lyndale Neighborhood Association (LNA) and Kingfield Neighborhood Association (KFNA). The event runs from 11 a.m. to 5 p.m., as do all Open Streets, during which time cars and buses are banned from the street, and traffic crossing the street is restricted. The route starts in front of Kmart on Lake Street, and goes to 46th Street West. The overall Open Streets sponsors are the same as all the Open Streets events, including Metro Transit, Blue Cross/Blue Shield, and AARP, among others. The local sponsors for this event are numerous, almost twice as many as other Open Streets we have covered—Inner City Tennis, T-Mobile, USInternet, House Lift, KFAI, Run for Beer, Quality Coaches, YMCA, Pompadour Salon, Pat’s Tap, Butter Bakery, Revival, Ramen Kazama, Locus Architecture, Outsider Pizza, Curran’s, Stonewood Properties, Nicollet Ace Hardware, Hawkins Automotive Inc., Driftwood Char Bar, Hola Arepa, Cocina Latina, Roadrunner Records and the LowBrow. 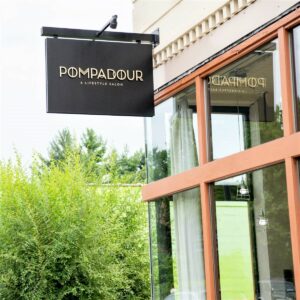 That sixth one, Run for Beer, is another thing that makes this particular Open Streets different from the rest. Run for Beer is an annual event coinciding with Open Streets on Nicollet and presented by an organization called Minnesota Brewery Running Series. As far as I know, Open Streets Nicollet is the only one that has any kind of run associated with it, let alone a beer run. So that children and others can participate more fully, this event is now a triple-header, including a Run for Root Beer and a Slow Bike Ride for Beer, as well. Participants can be sole competitors or teams (at least one of the Open Street sponsors is fielding a team, but teams can be any group that wants to run as a team). Races are staggered and will kick off starting at 11:15 a.m. with the 5K Run for Beer. The quarter-mile Run for Root Beer is targeted at early runners 9 years old or younger and will begin at 12:15 p.m. A Slow Bike Race (for Beer, of course) will close out the race day at 1:15 p.m. All races will kick off under the inflatable arch in front of Rev. Dr. Martin Luther King Jr. Park. One hundred percent of all registration fees go directly to Kingfield and Lyndale Neighborhood Associations. All participants have to be pre-registered to run, which you can do at Eventbrite at https://www.eventbrite.com/e/beer-run-nicollet-open-streets-part-of-2019-mn-brewery-running-series-registration-62603008283. 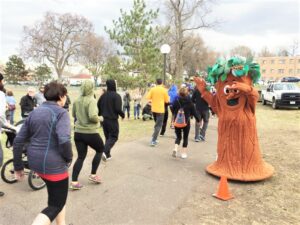 A previous year’s Run for Beer

Because not all the sponsor organizations are super-familiar, we looked into a few of them. Foodies will be well familiar with Revival, Ramen Kazama and Hola Arepa (Southside Pride’s restaurant reviews have covered Hola Arepa, in fact) and, of course, Curran’s and Cocina Latina have been in the neighborhood for decades. KFAI, Inner City Tennis, Nicollet Ace Hardware, Pat’s Tap, Butter Bakery Cafe, Driftwood Char Bar, and Roadrunner Records need no explainers, nor do T-Mobile and USInternet. But for the others, a few words of introduction. Hawkins Automotive, Inc.—as the name implies, an auto repair shop, on a street that has a lot of them. In business at 4500 Nicollet, family-owned, 60-plus-year-old business. Quality Coaches—also auto repair, located at 20 W. 38th St. since 1972, they have five stars on both Angie’s List and Car Talk and were voted “Best for Women” by MN Women’s Press. Pompadour Salon—a self-described “lifestyle salon,” they do haircuts and styles for women, men and children, and other esthetic services such as eyelash extensions, waxing and updos for weddings and such. Located at 3743 Nicollet. Locus Architecture, House Lift, and Stonewood Properties—no relation between them, but they’re all involved in designing, remodeling or building homes. Stonewood builds houses, only houses, and only two or three a year. Needless to say, these are big, impressive houses. It’s owned by the son of a house builder who carries on the tradition. House Lift is one of the many respected remodeling experts in South Minneapolis. Locus Architecture is a neighborhood institution, a 20-plus-year-old firm, yet with a lot of young, visionary architects, a wall full of awards, and a holistic, socially-conscious approach. They design houses, commercial spaces, worship spaces and more. Outsider Pizza—not a pizza place but a frozen pizza available at Cub, Target or Lunds&Byerlys. We covered it in a previous Open Streets. Finally, the one restaurant I was curious to know more about, I believe in its first year as a sponsor, is the Lowbrow. So, I went there last week for dinner, and I Iiked it a lot. It has an arty, young, casual vibe, really good comfort food offerings, and a decent beer and wine selection. Known for their giant oatmeal creme “pies” (not pies, but a take on the Little Debbie’s classic).
One of the sponsors—Nicollet Ace Hardware—is going way beyond the call of duty in its participation in Open Streets. Most of the sponsors will be content with getting their name in the program, having the word “sponsor” associated with them, and having a sidewalk sale, an information booth, or in the case of the larger organizations, a music stage or a sidewalk activity. But the hardware store, besides sponsoring a team in the Run for Beer, complete with event swag, is doing loads of activities. There are at least four animal-related activities—a petting zoo, pony rides, a German Shepherd demo team, and a Puppy Parade! (It’s worth a trip to Open Streets just for that last one alone, in my opinion). Additionally, they will have a sidewalk sale, separate booths for showcasing some of their vendors, and a henna booth where you can get decorations on your bod. And what else can you expect on the day? Roadrunner Records and/or KFAI will be presenting music on the avenue, dancing optional, and there will probably be music or at least outdoor eating and drinking at Pat’s Tap, the Butter Bakery, and Driftwood Char Bar, as well as other establishments. Politicians and electeds will be working the crowd, alone or with aides, peripatetically or in booths. Another great and unique part of Nicollet’s Open Streets (although other neighborhoods started copying it this year, we noticed) is its Artisan Market, featuring crafts and products made by cottage businesses and artisans in the neighborhood. A few of these artisans pitch the event and their own wares ahead of time. One this year asking you to check them out is a home-based artist operating under the name Nest and Tessellate, offering “magical folk art.” You can check out their products at www.nestandtessellate.art/about. In any case, be sure and bring money or means of payment, because in addition to the Artisan Market, there will be other surprise sidewalk sales, foods to try and drinks to drink. And watch out for those bad boys riding scooters on the sidewalk. 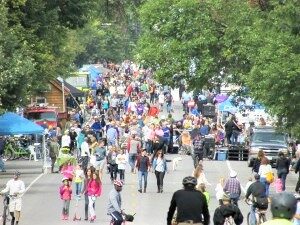