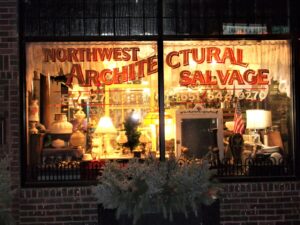 We took a leisurely weekend ramble eastward on Selby Avenue and discovered some delightful places to share. Of course, most Minneapolitans know Selby Avenue is there, a couple of blocks south of Marshall Avenue, which is your handy gateway to St. Paul if you live near Lake Street at all. (And, quick plug to save the planet, you can get there easily without driving, by taking the storied #21 bus.) You probably know that one of the few fully vegan restaurants in the Twin Cities, J. Selby’s, is there, and was highlighted here a couple of years ago. You may know about Mississippi Market, Saint Paul’s venerable food co-op. You may know about the Whole Foods Market there. But Selby Avenue has even more to offer than that.
We started our trek with a nice late brunch for fortification at the Neighborhood Cafe, 1570 Selby Ave., less than a block east of Snelling Avenue. This little but powerful cafe, more of a diner with a bar to be precise, is easy to miss on the high-powered corner where it sits, with Patina, Starbucks and Whole Foods crowding around it. (Cahoots Coffee Bar, which actually is a café, and also has sidewalk dining, is just two spaces away. But it’s been there for a while.) Neighborhood Cafe, which has a passionately loyal following, was founded about 16 years ago, according to one of the famously friendly and helpful servers, by a cook and a server from another popular Saint Paul café, and they are still currently the co-owner and manager respectively. In early 2013 they got a beer and wine license and added drinks, cocktails and happy hour to the mix. They’re known for American comfort food (if American includes Mexican and Cajun and such adjacent cuisines); home-baked treats; fresh-squeezed OJ and mimosas made from it; friendly, fast service, and reasonable prices (no menu item over $12, I read somewhere). There are two dining rooms, street parking, nice restrooms, a huge chalkboard with drinks and specials, and simple diner-style decor with large framed black and white photos of early Saint Paul street scenes, from the 1950s and before. Their main specialty is brunch, or breakfast-for-dinner, and they have all the favorites, including cinnamon swirl French toast, migas, benedicts, omelets and cornbread pancakes, and, of course, those fresh-squeezed mimosas. The bakery case has a dozen mouthwatering baked-in-house treats and a few purchased ones, mainly doughnuts and muffins. 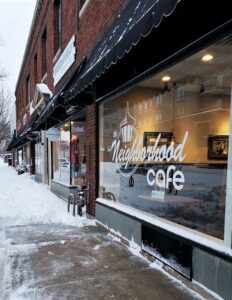 A few blocks east of Snelling, at 1158 Selby Ave., you’ll find the Express Bike Shop and its companion the Best Buy Teen Tech Center. Though both are youth development projects of Keystone Community Services, with Express Bike also being a social enterprise, only the bike shop is open to the public.
The summary of their history explains the social enterprise part: “In 1995, three seemingly unrelated events were taking place in our neighborhood: Youth Express [the Keystone Community Youth Project] was seeking to develop a social enterprise where neighborhood youth could develop valuable skills and learn the tools of entrepreneurship, Liberty State Bank had reluctantly become the owner of a long-abandoned Amoco service station, and the Minneapolis Police were seeking a better outcome for the large quantities of refurbishable bicycles that were leaving the impound lot for the scrap yard. Fate somehow allowed these circumstances to converge and, less than a year later, Express Bike Shop was born.” In the 24 years of its existence, besides serving over 6,000 customers and teaching over 400 youth entrepreneurial and bike repair skills, the Express Bike Shop has kept over 30,000 bikes from being scrapped, clogging landfills and creating a need for more brand-new bikes, to the detriment of the tired earth. Recycling win! Express Bike sells refurbished bikes, obviously, but also offers a full repair service, and sells parts and accessories, both new and used. They are doing it well, too, with a rating on Facebook of 4.8 out of 5 based on 32 reviews. 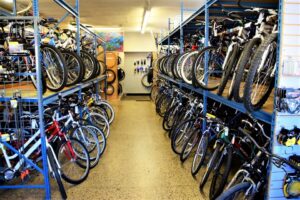 Just east of Lexington Parkway at 987 Selby Ave., you’ll find our next interesting spot, the Sewing Lounge, which has a friendly, down-to-earth vibe. The store sells fabrics, patterns and notions, as well as offering in-house sewing machines, formal classes and informal sewing meetups, in a convivial lounge-type atmosphere. The Sewing Lounge has both a website and a well-maintained Facebook page. I first encountered this type of sewing circle business phenomenon in the form of a “sewing café” on the high street of my old “home town” in England. Well, in the margins of the Sewing Lounge’s Facebook page is the “Pages liked by this Page” and lo and behold, one of them was The Sewing Café, Castle Street, Hinckley, UK. What a small world this is. The Sewing Lounge offers both individual private lessons and small group scheduled lessons. The next one coming up is the popular Sewing 101 for complete beginners on Oct. 26. See the Classes and Calendar section of their webpage at www.sewinglounge.com/calendar for times, cost, and a registration form. 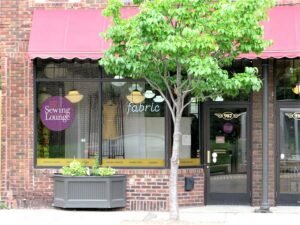 Almost adjacent to the Sewing Lounge, at 981 Selby Ave., is Northwest Architectural Salvage. This small but impressive business is a treasure-trove for practicing “This Old House” fans, i.e., anyone trying to rehab an old house and preserve its historic look. It’s like an antique store for fixtures—lighting, hardware for both fixtures and furniture, windows, doors, built-ins. Northwest Architectural Salvage’s only online presence is a Facebook page, which is informative in a minimalist way, and unapologetic about the fact that they’re running a small business and not a website. So, whether their inventory moves very fast or not, you’re not going to find out on Facebook, but you can get a phone number there to call and ask about your specific needs. Or just go for a browse. That’s what antique stores are for.
Farther east on Selby, a little west of Dale Street, is the Walker West Music Academy. This is now adorned along the entire streetside frontage with a mural in panels by award-winning local artist Ta-coumba Aiken. We didn’t go in but did a slow walk past it to admire the artwork up close, then researched the history and current doings of Walker West on the internet. Walker West was founded in 1988 by Rev. Carl Walker and Grant West, with a rented piano in an upstairs duplex, offering only piano instruction. In 1989, they hired a new instructor, moved to 777 Selby, and launched a horn instruction program and a jazz ensemble. Over the years, they added many more instructors, founded a summer camp, branched out into string instruments and chorus. In 1996, Grant West and his brother Tom played at Prince’s wedding reception. The jazz ensemble entered prestigious competitions and won awards, and Walker West collaborated with other musicians in great local performances. They moved to their present home at 760 Selby in 2014, and remodeled the building, adding Aiken’s artwork in 2018. Nowadays, Walker West has all of the above, plus electronic music and a full schedule of performances, as well as year-round instruction in all aspects of music. They recently held the Rondo Community Music Series. 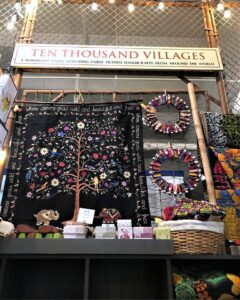 We finished our tour of Selby Avenue and its delights at one of the most delightful of places, Ten Thousand Villages (TTV.) We covered this organization several years ago when it was located on Grand Avenue, mostly focusing on its roots as a church project and early beginnings in Minneapolis, but it’s worth an update to just focus on this one store (it spawned a nonprofit “chain”) and its current activities. The move to 520 Selby Ave., a few blocks east of Dale, allowed an expansion of the store. And in addition to fair trade, they have a new world-saving bandwagon they’re contributing to—the zero-waste and reuse-recycle movement. TTV recently held a zero-waste workshop in the store in collaboration with Tare Market of Minneapolis, which we covered in an article on 38th Street, as the Midwest’s only zero-waste shop. TTV is volunteer-run, for the most part. Fully 100 percent of their products are fair trade, meaning the artisans who make them, or the workers who harvest the raw materials, are paid a living wage for their local economy, and the store itself is nonprofit, sending money back to community projects. They carry edible treats such as chocolate, coffee, tea and oils, and all sorts of crafted items from handwoven scarves to jewelry, to kitchen and tableware, to purses and bags, to journals and greeting cards. And lots more. You could spend hours in there. They also have a small section of kids’ books, another of books about fair trade and environmental stewardship, and a used book section just inside the front vestibule. Check out their Facebook page, then go check out the shop itself.