Development: with or without the neighborhood? 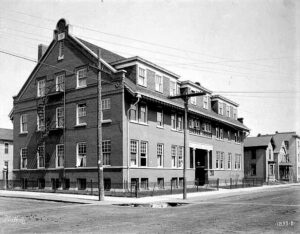 In 1905 Charles and John Pillsbury donated $40,000 to build Pillsbury House at 320 16th Avenue in memory of their parents. Today, “The City’s development goals for this site include a building of 10 stories or greater on a portion of the site.”
Photo: Minnesota Historical Society, 1910.