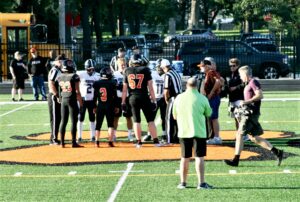 Members of the South High School community have been rallying for upgrades and fixes to the school’s Les Barnard Athletic Field for years. The bleachers were too small for the crowds who would come to cheer the South’s Gallant Tigers, the track was in terrible shape and the football/soccer field was too small and unsafe. But after years of alumni and community pressure, in 2017 the first plans to fix the problems were initiated.
Athletic Director Amy Cardarelle speculated that the total cost of the renovation, funded mostly by grants and donors, was more than $3 million.
So the excitement was high when, on August 29, fans gathered to see dignitaries and donors for the new field’s first football contest. Now, student athletes can finally play under permanent lights. Runners now have a brand-new rubberized track, and new aluminum bleachers are large enough to hold fans. The new loudspeaker system is state of the art and a new press box can hold print and broadcast reporters, both paid for by 1961 graduate Harvey Feldman. Harold Benson, a 1950 graduate and education consultant, was another large donor.
“This was 30 years in the making,” said Assistant Athletic Director Tony Stewart, a former football player and 1983 graduate. “We lost to Breck, unfortunately, but the kids played with emotion and they had an awesome time. I remember playing when all we had was a porta-potty and a field with drains in the middle. This was good.” 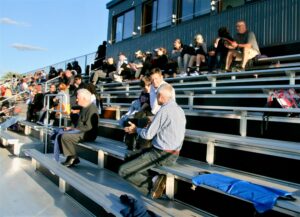 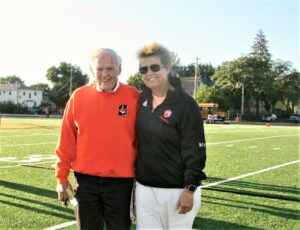