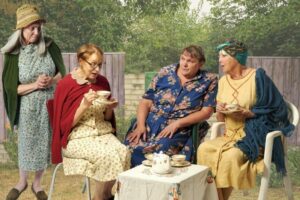 Wendy Knox has done it again. She has moved her Frank Theatre all over the Twin Cities. This time she’s at the Gremlin Theatre in St. Paul. She uses this intimate space to show us what it means to grow old in a production of two plays by Caryl Churchill.
The first, “Escaped Alone,” is a garden tea party with four older women. It’s a little like dementia meets Theater of the Absurd, or Beckett goes bonkers. The conversation goes on lightly and a little obliquely (they’re all very kind and interested in each other—unlike “Waiting for Godot”), but the conversation gets surrealistic when they start talking about how one of the women had to shoot an abusive husband.
At one point one of the women goes off on an extended flight of fancy and Sally (Barbara Berlovitz) leans over and asks her if she’s taken her meds: “Medications?” It’s a lovely touch, and old age and vulnerability, forgetfulness and dementia, seem not so horrifying. It’s almost a comfort, letting go of all the mundane details of this world and flying off to another land.
The short plays that follow “Escaped Alone” show us just how alone we really are. Patrick Bailey shows us the things racing through his mind the moment before death and the rituals observed in assisted living.
It’s an intellectually and emotionally challenging evening, as any evening is under Wendy Knox’s spell.
It closes in two weeks, Sept. 29, so if you want to see how a gifted director and playwright along with a superb cast and crew confront the abyss and stare into the darkness, then go to franktheatre.com or call them up at 612-724-3760 and get tickets.