TEXT AND PHOTOS BY SCOTT SCHLUTER

Finally the students of South High School have a track and field that they can be proud to call home.
On Thursday night, Aug. 29, South High celebrated the grand opening of its new athletic facility. Now South students can compete—with a new track, long jump, pole vault and shot put, a new field for football, soccer, lacrosse and ultimate frisbee complete with new bleachers and, for the first time, a sound system and press box and lights.
Gone are the days when players would try their best to avoid the drainage grates and concrete pads, and gone are the days when athletes would hope to not get injured on the peeling and pitted track surfaces.
As former Minneapolis Public School (MPS) Athletic Director (AD)Trent Tucker said during the planning stages of the field in 2016, “The athletic facility is the ‘front porch’ of the school. It’s where the community can see and cheer on the students of their school.”
Student involvement in school and extracurriculars is universally accepted as a positive indicator of student success in regards to attendance, GPA and graduation rates. Superintendent Graff that evening stated the importance of student participation as it creates “engaging opportunities and learning environments … personal connections … and real life interactions.”
In a 2016 interview with then-MPS AD Trent Tucker, he stated that Minneapolis City Conference athletes had a 98.9 percent graduation rate and an over 3.1 GPA.
Assistant AD Stewart remembers his playing days with grates in the middle of the field and no running water at the field.
South High senior student track athlete Jocelyn Ferguson said that when “being on a team, most of my friendships are from teams. You’re going through so much together. You’re forced to work together and problem-solve with the other athletes, and it helps you create bonds you can’t create anywhere else besides sports.” Ferguson went on to say that with any activity, “If we get kids to pull out of their comfort zone and join teams and join clubs that they wouldn’t usually join, that they might be scared to join, you’ll get a mix of people into different groups, and people will start talking and become friends.”

Teammate and senior track athlete Sahara Jama explained: “When you’re in a sport during high school, it’s easier for you to learn how to take criticism from your coaches and follow directions, which will help later in life when getting a job, and [sports] applies to everyday life.”
In June of 2016, a fellow soccer parent mentioned to me that properties being purchased adjacent to the field by MPS were not for the new athletic facility we had been hearing about for several years, but for another MPS use. She spoke up at an MPS Board meeting about South’s needs, but knew she wouldn’t be able to continue, so it was now our turn to say something and do something.
From that time on, one parent or another, one student or another went to MPS Board meetings, wrote letters, made phone calls, talked to reporters, anything to get the attention of anyone who would listen to the need for a usable track and field.
By Oct. 26, 2016, Superintendent Graff, with the involvement of our MPS District 3 School Board Member Siad Ali, met with the community at South High and stated that South will have a new track and field. It was wonderful news and while this was great, there were still months of meetings, surveys, emails, phone calls and planning by dozens of students, parents, coaches, community and MPS staff that needed to happen to map out what the facility should and could be.
The South High track and field is now something that not only the South High students can be proud to call home, but also the South High community. This project is all about creating the best opportunities, not only for the student athletes on the new track and field, but also for all those students, parents and families cheering from the bleachers on our new front porch.
Thank you to all of those in the South High family, along with MPS staff who helped make this facility a great place to “create bonds” and “personal connections” in the lives of the present and future South High students.
And now … we’ll keep the “front porch” light on for you as well.
You’re always welcome to come and join us. 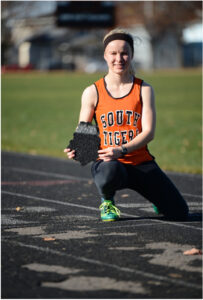 Emma Schluter holds a piece of the old track.