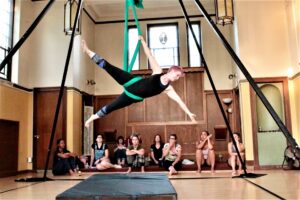 Last Thursday we went to a Community Meal at Roosevelt High School, just north of 42nd Street on 28th Avenue South. I mainly know Roosevelt High as my caucusing and voting place. Also, I know a woman who was until recently employed there, and a key player in building up its excellent arts program. Last year, their theater arts program put on a well-reviewed production of the musical based on Studs Terkel’s book “Working,” a groundbreaking oral history book I read and was blown away by in college 45 years ago. Roosevelt also has a highly respected music program, including a chorus and an extracurricular Jazz Band. Roosevelt High School was founded in 1922. At the time, there was massive unhappiness about the name. The surrounding area, which was fairly rural at the time, consisted of mostly Farmer-Labor Party families, and they were incensed that their school was named for a despised Republican, Teddy Roosevelt, who had died three years earlier.
The Community Meal was a one-off event, celebrating two things that the school wanted to share with the community: its culinary arts program, producing chefs and food artists, and its recently installed community garden, which is used by both Roosevelt students and community volunteers to learn about growing food, pollinators, soil health, and many other vital lessons for today’s precarious conditions. The garden itself is partially underwritten by Standish-Ericsson Neighborhood Association (SENA) and they also co-sponsored the meal. The garden, which was first installed over the spring and summer of 2019, has been “put to bed” for the winter, but will be available again in spring if you want to participate.
This column has mentioned SENA before. I have recently joined its board, and am gradually learning more about the interconnected communities and organizations in my local social ecosystem. One of them that I knew about and also suspected was somewhat in the doldrums is West of the Rail Business Association. The reason I thought this is because, since I get most of my knowledge from the internet, I check their website now and then, and notice that it doesn’t have many (any?) recent businesses, and has loads that have gone out of business. Also I notice just how volatile the small business environment is. Here is a list of businesses on the WRBA directory that are no more, or have left our neighborhood:
-A Tree Service
-Colossal Cafe (on 42nd St., replaced by a sandwich shop, then Dulceria Bakery)
-In the Kut barbers (changed name)
-Keen Eye Coffee (has been two other shops since then, not listed)
-Marla’s Caribbean
-Pupuseria La Palmera (replaced by Hamburguesas El Gordo).
And there are undoubtedly more that I am just not familiar with. They did manage to purge The Roost from the site when it closed, but never picked up Carousel + Folk, which replaced it, and Pilgrimage Restaurant, which has had two replacements (one the relocated Colossal Cafe) and is now Standish Cafe. SENA has hired an intern who just completed a canvass of WRBA or potential businesses in SENA’s area (WRBA’s area is somewhat larger) and has determined that there is strong approval of the idea and aims of WRBA and that business owners would join if it got revitalized and effective. SENA is currently hoping to put the same intern to work on refreshing and rebuilding WRBA, and will focus a lot of energy on making WRBA effective in promoting and strengthening small local businesses.
A little-known (except by the culture lovers) resource right on 42nd Street, that has never been in WRBA, is Sandbox Theater (3109 E. 42nd St.). The theater is an ensemble-based, multi-disciplinary and experimental theater that produces highly original performance art and plays, all developed collaboratively by company members and sometimes temporary partners. Their space is small, so often their more ambitious projects are staged elsewhere, while their small studio/theater hosts other events, such as artisan pop-ups. Previous productions have taken place at Pioneer Park in Roseville, ARIA, the Crane Theatre, and the Germanic-American Institute. Case in point, their most recent production, “Bone Mother,” which was based on Russian folk tales of Baba Yaga, a supernatural crone figure. This was workshopped, created, rehearsed and staged at the Museum of Russian Art (5500 Stevens Ave. S., Minneapolis)—a space with soaring ceilings and atmospheric decor. The soaring ceilings were important because a big part of this work involved acrobatic movements on aerial silks, a specialty of Sandbox’s Evelyn Digirolamo, who served as project lead and co-director on “Bone Mother.” An experienced teacher, Evelyn has over eight years of aerial training, and is the driving force behind Sandbox’s aerial wing, The Swingset. “Bone Mother” ran Sept. 19 – 27. After it closed, Sandbox held a garage sale in their own space on Oct. 5. There are no Sandbox productions in process now, but a couple of pop-ups will take place in the coming months. The only one we can confirm is NSOD Clothing Company pop-up Nov. 15 – 17. Follow Sandbox Theater on Facebook to get up-to-date information. Check out NSOD Clothing on Facebook too. 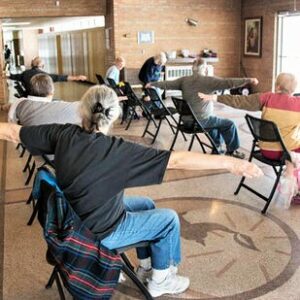 Another great neighborhood resource that might get overlooked (and not picked up by WRBA) because of its nonprofit status is Nokomis Healthy Seniors, and its host-partner Bethel Lutheran Church, at 4120 17th Ave. S., Minneapolis. Although based at the church, not all of NHS’ group activities take place there. (That always gives me a start when I see it, because I automatically think National Health Service.) One that was held there recently (Oct. 7) was the Healthy Aging Fair, co-sponsored by the City of Minneapolis and AARP MN. This featured a live jazz band and dancing, free healthy food, and breakout sessions on topics such as brain health, downsizing and Medicare planning. NHS has an excellent website, despite not having any millennial members (gentle sarcasm there) at https://www.nokomishealthyseniors.org. Their mission states: “NHS helps older men and women in the greater Nokomis area of Minneapolis continue to live safely and independently in the homes they love. Since 1994, NHS has been a vital resource for older adults, serving them with affordable health and wellness programs including: social events, transportation, support groups, exercise classes, health and education services, and resources and referrals.” Some of the exercise classes are so affordable, they’re free. Recurring events at other locations include the Low Vision Support Group every second Tuesday at 1 p.m. at Nokomis Square 55+ Co-op, the free exercise class at Faith Church (3430 E. 51st St., Minneapolis) every Monday at 10 a.m., and the Diabetes Support Group, 1 p.m. on the first Monday of every month at the Nokomis Library. Recurring events at Bethel Lutheran include a Knitting Group at 1:30 p.m. every Tuesday and an Art Group at 10 a.m. every Wednesday. Every Thursday except Thanksgiving, you will find at Bethel “The Nurse Is In” at 9:30 a.m. and a chair exercise class at 11 a.m. This is only a small sampling of the many offerings for seniors at NHS. Check them out! 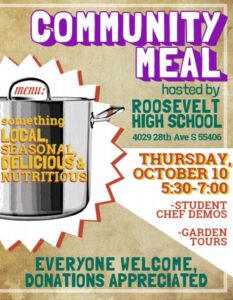