Do we need more cops? 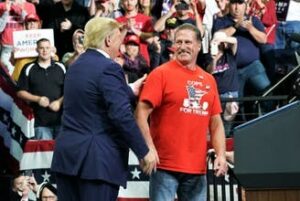 Does this photo of Minneapolis’s finest make your skin Kroll?

Do we need more cops?
Yes, and no.
Yes, we need a greater police presence downtown and on Lake Street and Franklin Avenue. It is intolerable that violent gangs are beating and robbing people in broad daylight downtown. This has to stop.
When Tony Bouza was chief of police in Minneapolis, 1980 to 1989, he used decoys on Hennepin Avenue to clean out some of the gangs of kids that had come downtown to cause trouble. He said then, “We don’t have a gang problem in Minneapolis. We have a youth problem.”
We need a cop in plainclothes, looking vulnerable, wearing a body camera that is broadcasting to a command post, to attract trouble. And we need to arrest that trouble, take them through a week of intense counseling, give them vocational training and unlimited education and make them socially useful and productive citizens.
Yes, we need more cops on the street. Does that mean we need to hire eight new cops?
“The Mayor recommends $884,000 for ongoing and $428,000 for year-one funding to hire and train officers for areas in Minneapolis experiencing activity impacting community safety and business viability, and would enhance community outreach and communication in these areas:
• 1st Precinct – Hennepin / 1st Downtown – 2 officers
• 1st Precinct – Cedar Riverside – 1 officer
• 3rd Precinct – Chicago/Franklin – 1 officer
• 3rd Precinct – E. Lake Street – 2 officers
• 4th Precinct – Northside – 2 officers”
He wants to hire young people, with no experience, to walk the streets, after Bob Kroll of the Police Federation has shown them the “shoot first” movies that conditioned Jeronimo Yanez to kill Philando Castile and Mohamed Noor to kill Justine Damond.
Wouldn’t it be much better for everyone to have a cop with a little more real-life experience out on the street, walking around and meeting the neighbors?
One of the other things Tony Bouza did was to begin one-man squad cars. Most police calls can be handled by one officer, but cops like to have a buddy along, so the MPD has slipped back into two-person squads. You don’t need two cops in a squad car. If there’s trouble, cops should retreat and call for backup. Two-person squads are a terrible waste of taxpayer dollars.
One of the things Tony Bouza didn’t do is he didn’t promote anyone during his entire time as chief. He says, “Cops make a good living. They have a good pension. They complain but none of them quit.” He regarded it as part of his public trust to guard the treasury and protect the taxpayer.
That’s not generally what happens with a new chief. Most of the time Minneapolis chiefs are promoted from within, and the first thing they do is turn around and promote their buddies to cushy desk jobs. As we noted a year ago when reviewing the 2019 MPD Budget: “The budget will increase police administration by 16.5 positions and reduce patrol positions by 15. Almost the first thing Chief Arrandondo did after being appointed was to promote 20 of his friends to the ranks of sergeant, lieutenant, commander, inspector, deputy chief and assistant chief and, thereby, set up more desks and roadblocks between him and the public.”
Yes, we need more police presence. But I am not convinced we need more cops. Why can’t we get some of those cops who are sitting behind desks back out on the street?
I have tried for over a month to get a line item budget from the Mayor’s Office that could show how many cops were sitting behind desks and how many were out on the street. They wouldn’t send it to me. Casper Hill, the media relations coordinator sent me to John A. Elder, director of the MPD Office of Public Information, and John sent me back to the mayor. I wrote to Alondra Cano, the chair of the Public Safety Committee, who will review the MPD line item budget. She assured me her aide would help: “Dylan can work with you on this.” After another couple of weeks, I got this: “I will continue to work with MPD, Communications, and the Budget Office to deliver this MPD line item budget as soon as possible. Have a good day. Dylan.” That was two weeks ago.
The budget for the MPD is a matter of public record. It should be readily available to the general public. Or do we simply hand the chief a check for almost $200 million of our tax dollars and ask him to spend it wisely? Without accurate information, how can the voters in Minneapolis hold elected officials accountable?
Jacob Frey promised the voters in Minneapolis transparency and accountability: “The people of Minneapolis deserve transparency from their government.”
It’s time to make good on that promise.