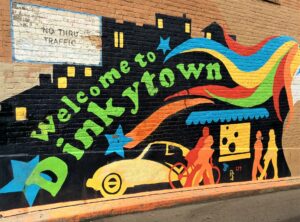 1 Your sons and your daughters are beyond your command.
Dinkytown is the University of Minnesota, and the Dinkytown experience is quintessentially the student experience. Even if, like me, you first experienced Dinkytown as a fully grown adult almost a decade away from your own college student experience, you feel its influence there, and as an adult, you have a vague feeling of visiting a foreign country, the country of youth. Some people don’t like that, but I do. I am energized by youthful rebellion, even if in theory I am part of what’s being rebelled against. I am not crazy about the brotels*, though. (*Brotel is the disparaging name given to shiny multilevel “luxury” student housing by private developers. I’ll just call them shiny boxes from here.) On one hand, I have this weird desire to live in one myself, and on the other hand they fill me with vague distaste, and a fear for the influence they will have on the youth who do live there. But the shiny boxes are Dinkytown now, and that’s not going to change. The Dinkytown story is about change, about Octavia Butler’s assertion that “the only lasting truth is Change” and we’ll tell it through the lens of its famous changeling storyteller, Bob Dylan. Dinkytown sits in the territory of the strong neighborhood group Marcy-Holmes. This is ironic, since Marcy-Holmes is also linked to the University but is more in the tradition-and-heritage camp. There is a tension in the air in Dinkytown, between its artists and students and revolutionaries, and the builders and renters of the shiny boxes, and the neighborhood association and staid homeowners who cannot stop the shiny boxes but at least are managing for the most part to keep them within Dinkytown proper.
So, what to make of Avocadish, an eating establishment soon to debut in Dinkytown’s latest student medium-high-rise, Sydney Hall, nearing completion at 310 15th Ave. SE, next to the Dinkydome? Sydney Hall is going to have a food court, just like a suburban shopping mall. But Avocadish is not the kind of place you would find in most mall food courts. Two youthful entrepreneurs are risking all, including “millennials and their avocado toast” jokes, to fulfill a dream. Alex Varouhas, a 2016 Carlson School of Management grad, says to the doubters that Avocadish will be exactly the kind of place he wished had existed when he was a student. He is partnering with chef and professional kitesurfer Lydé Heckroodt, who hails from South Africa. Their concept is a sit-down dining establishment with fast healthy meals, almost all of which feature avocado. There will also be an early-opening takeaway window for quick breakfasts. Probably avocado toast. They’re doing catering and pop-ups while building out their new stores.
2 I’m not sleepy and there is no place I’m going to.
Another newish spot in Dinkytown was also the dream startup of a young business student, but 16 years ago and in another place. Insomnia Cookies was born in Seth Berkowitz’s dorm room at the University of Pennsylvania in 2003. The idea was to deliver warm cookies and/or cold milk and/or hot coffee to beleaguered students in their dorms any time from sundown to 3 a.m. It must have hit a spot, because its growth has been exponential for the world of student-oriented businesses. In 2006, they opened their first brick-and-mortar retail store in New York state (you could come in to get them, but you could still also get delivery), and in 2008, they launched cookie and milk and coffee food trucks. In 2014 they launched a mobile app, so you could speed dial for your cookie fix. In 2016 Insomnia opened its 100th store, and also that year closed down the food trucks. The Dinkytown site at 402 14th Ave. SE is the only one in the Twin Cities. You can access them online at https://insomniacookies.com/, but if you’re more than a little bit off-campus you may, sadly, have to go pick them up.
Bordertown Coffee, in a former fraternity house at 315 16th Ave. SE, is another Dinkytown establishment with roots in the student entrepreneur experience. From their website description: “The vision for Bordertown started when one of our founders … heard about starving children and realized the need to live for more than his own aspirations and entertainment. The photographs in our entry are from a home in the border-town Juarez, Mexico, that serves children and families in one of the most violent cities in the world.” Bordertown is apparently a nonprofit, but most of their income just pays their staff and owners. To be fair, little independent coffeeshops never make anyone rich, no more than independent bookstores. A small amount of excess income supports either that children’s project in Juarez or a local cause that they want to raise awareness for and assist. They have ethically-sourced coffee and house-made bakery items, a community room available for meetings, and student-oriented hours. 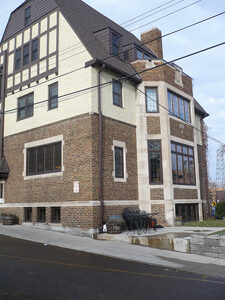 3 You can always come back, but you can’t come back all the way.
When I used to hang out in Dinkytown, back in the day, my favorites were a couple of coffee shops favored by students, a sub and shakes shop that was an amazing combination of healthy and cheap, a venerable Chinese restaurant where 90 percent of the patrons seemed to be Chinese, and a Vietnamese restaurant well known for its authentic bona fides. This was a time 20-plus years ago when my daughter was a student at the U, and I was an employee there. When I came back from my 13 years in the UK, the daughter had scarpered off to Portland, Ore., and was now a mom herself, and the department I used to work for at the U had been atomized out of existence. I was afraid to see what had happened to Dinkytown. The shiny boxes had come in. There was construction everywhere and it felt like a state of flux. My sub shop was gone, one of the two coffee shops was gone, and the other transformed beyond recognition. This was, as you may have guessed, the Purple Onion. I haven’t yet been in the new one, but the only thing that’s the same is the name anyway. It seems popular with the kids, so we’ll leave it to them.
Shuang Cheng, the Chinese place, and Camdi, the Vietnamese place, weathered the economic and other storms well and are still in the same spot, with more or less the same menu, and thriving. I visited Shuang Cheng just last week and it was almost like going back. The food is the same, just more costly. (Still darned cheap, though—a satisfying lunch for well under $10.) It may be that the clientele has changed, but I was there at 2:30 in the afternoon, so I couldn’t say.
4 Someday, everything’s gonna be different.
The construction of many more shiny boxes and also the Green Line train cut a huge swath through the favorite little eating spots in nearby Stadium Village. One of those to fall was Bun Mi, a specialist in the Vietnamese banh mi sandwich, operated by Sherman Ho. Ho has very recently “soft-opened” Banh Appetit in The Marshall at 511 14th Ave. SE. People who knew and loved Bun Mi will know what to expect from Banh Appetit.
Wally’ s Falafel and Hummus is almost an old favorite by now, having opened in 2009 at 423 14th Ave. SE by owner Wally Sakallah and two of his sisters, who manage it. They are Palestinians from Gaza who were disappointed at the widely available but not-quite-right falafel and hummus in town and so decided to do it right the Gaza way. According to a recent piece in the Minnesota Daily: “The family orders spices that are shipped to the U.S. from countries like Jordan and the United Arab Emirates, mash chickpeas by hand to make their homemade hummus and even buy specific tahini cheese that comes delivered in pallets from California—all so dishes will taste exactly as they would in Palestine.” The shop is a celebration of Palestinian culture beyond the food, with stained glass, photos and paintings to remind them of home. It’s popular with other Middle Eastern diners too, no doubt due to the high quality and attention to detail.
Lands End Pasty Shop is another relative newcomer to Dinkytown, having been in its spot at the back of Dinkydale for about 10 years. And it’s another shop that’s getting kudos from specialists of its national cuisine (in this case, Cornish, the food of Cornwall, a large county in southwest England that used to be an independent kingdom about a thousand years ago.) The owner is American but has a family member who married English and so they visited Cornwall a lot and fell in love with the county and the pasties. (I can relate. I also adore Cornwall, although I am not a big fan of pasties. For me it’s the cream teas, and the excellent produce and fish.) So highly regarded were Lands End’s pasties that British patrons encouraged them to join the International Cornish Pasty competition at The Eden Project in rural Cornwall, which they attempted to do this past March but did not make it due to catastrophic travel delays. The pasty shop is the site for meetups of a local cricket team and a Cornish in Minnesota group. They serve the traditional pasty of skirt steak, rutabaga, potato and onions in a short crust pastry, and also fancier fare like the steak and Stilton pasty, as well as chicken, vegetarian and sometimes game versions, such as elk and venison. 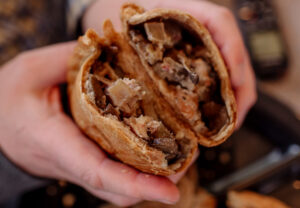 5 One more cup of coffee for the road, one more cup of coffee before I go.
In homage to Mr. Dylan, I will end my journey through Dinkytown past and present with a cosmic coffee shop. Cosmic Bean is a more recent enterprise from the Wally mentioned above, the owner of the falafel place. Located right across 4th Street from Dinkydale, it serves coffee, tea, smoothies and baked goods, and also dispenses CBD oil in a variety of ways, including what I tried for the very first time, as a shot in a coffee drink. The hemp is organically grown in the region, and the CBD oil made locally, and the coffee is from a local roaster. This is an amazing shop, well worth a visit the next time you find yourself in Dinkytown. 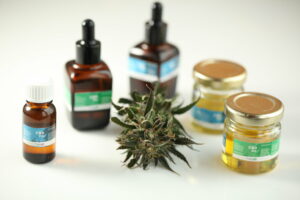