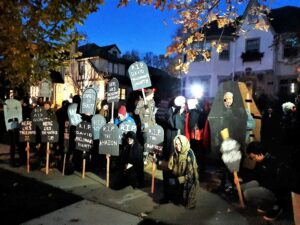 Minnesotans stage a “funeral for the Earth” at the home of David MacLennan, CEO of agribusiness giant Cargill, for complicity in Amazon fires

In the pursuit of profits, Cargill facilitates the destruction of the Amazon for soy and beef production. Across huge expanses of the Brazilian Amazon and the adjacent Cerrado savannah, fires continue to rage.
In 2014, Cargill “pledged to eliminate deforestation” and committed to cleaning up its supply chains. In July 2019, the advocacy group Mighty Earth reported that Cargill’s trading remains “closely associated with deforestation.” In 2018, Cargill was among a handful of multinational companies fined millions for buying soy from land that had been embargoed for illegal deforestation in Brazil.
On Thursday—Halloween—evening, Minnesotans protested at the house of David MacLennan, the chief executive officer of Cargill, the multinational agriculture commodities trader based in Wayzata, Minn.
In a speech outside MacLennan’s house, Revmira Beeby said that, “Corporations are just intangible entities. It’s the handful of top executives and the Cargill family in charge of Cargill that are directly responsible for Cargill’s policies. CEO David MacLennan is personally responsible for the burning of the Amazon rainforest and the threatening of indigenous peoples and their land. Cargill’s corruption and inaction is what brings us here—outside the home of MacLennan to hold him accountable.”
The fires are no accident. The Bolsonaro regime is actively encouraging guerilla farmers, loggers and miners to invade and burn indigenous territories so that they can be stolen for global commodities trading purposes such as with Cargill. This is part of an explicit campaign of indigenous genocide and ecocide. According to the Guardian, Bolsonaro has explicitly admitted that “the recognition of indigenous land is an obstacle to agribusiness.”
To enact this agenda, Bolsonaro has rolled back environmental protections and attacked indigenous peoples’ and Afro-Brazilians’ constitutionally-guaranteed right to the land. Spurred on by these actions, land-grabbers and plantation owners working with Cargill have intentionally set wildfires to clear the forests. Cargill is working with the Bolsonaro regime and is purchasing from these embargoed areas, and is thus directly supporting this practice.
One of the organizers of the protest was Northfield Against Line 3. Jonathan Chen explained the connection: “… The issues echo each other: Enbridge is clear-cutting the proposed route ahead of necessary permits and without consent in indigenous territories up north, and are threatening indigenous peoples and their sovereignty. We see similar violence being waged by Cargill, which is why we organized this event in solidarity.”