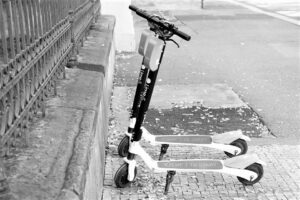 Noah J. McCourt, a disability advocate with autism and developmental coordination disorder, used to enjoy taking strolls around the Twin Cities. No longer. Now he fears for his safety because every day he is dodging scooters traveling at high speeds down the sidewalk. Several times, scooters strewn across his path also have caused him to nearly trip.
In recent months, dock-less scooters have become more common throughout Minneapolis neighborhoods. They are ubiquitous. This proliferation has occurred in an unregulated and haphazard fashion. For many, scooters may be a nuisance. For others, they may be a convenience. However, for people with disabilities, the presence and use of these scooters deny them access to public walkways and pose a serious risk to their safety.
McCourt repeatedly reached out to the City of Minneapolis, particularly Philippe Cunningham, who chairs the city’s Committee on Civil Rights, and he received no response.
In frustration, McCourt filed a lawsuit in United States district court, alleging violations of the Americans with Disabilities Act and the state anti-discrimination laws. The suit challenges the failure of the City of Minneapolis and private scooter companies to maintain accessibility of the city’s public sidewalks, curb ramps and cross walkways for people with disabilities. McCourt is seeking an order prohibiting the scooter companies from operating on public walkways and denying access to disabled residents and visitors.
When Donald Trump comes to town, the entire city comes out to protest in the streets about civil rights, but when people with disabilities simply want to access public service, there’s an overwhelming silence from those who loudly profess their progressive values. Being involved in the community shouldn’t be a privilege reserved for the community elite. We have a right to use the city sidewalks just like everyone else who lives or visits here.
The scooter companies have treated our free public walkways as their own private business establishment and the city has done absolutely nothing to remedy the situation. Access to city sidewalks is a lifeline for us, and our needs should take priority over corporate conglomerates.
The case has been assigned to Chief Judge John Tunheim and is scheduled to be heard in district court later this year.