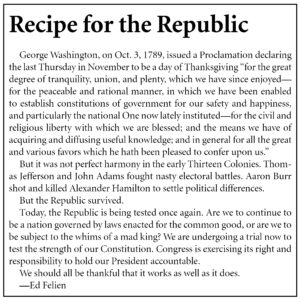 Fake Cheese Cake
I’ve been making this simple dessert for 40 years at least. In the family we call it “lemon cheese cake” even though we know it’s not. It’s a delicious fake cheese cake (a jello dessert) made from stuff in cans and boxes. It might be a pleasant surprise at Thanksgiving if you want to present it along with the traditional mincemeat and pumpkin pies.
You can buy a graham cracker crust or make your own with 15 or 16 two-part graham crackers, crushed, and 1 stick (1/2 cup) of melted butter. Put the crackers in a large freezer bag and roll over them with a rolling pin. Children find this very satisfying. Mix with melted butter and press into a large (10-inch) pie pan. Save some crumbs to sprinkle on top when the filling is almost set.
Add 1 cup boiling water to a package of lemon jello (or mango jello) and stir for five minutes, or maybe three. Just make sure it’s long enough to prevent rubbery jello. Stir in the juice of one small lemon or lime. Whip together an 8 oz. package of cream cheese (room temperature) and 1 cup of cold evaporated milk. When jello has cooled, fold it into the cream cheese/evaporated milk mixture. Very patiently, spoon the liquid by small spoonfuls into the crust (if you pour it, the crust will be displaced) and put it in the refrigerator to set. Voila.
—Elaine Klaassen

Aunt Betty’s Polish Rolls
Eastern European cookery is known for its delicious sweet “rolls” with a rich butter and sour cream-laden yeast pastry, rolled up jelly-roll style, filled with nut paste, poppy seed paste, or pureed dried fruits such as prune or apricot. With names such as potica in Slovenian, strucla or makowiecz in Polish, and tons of other names such as diosbejgli, povitica, or orehnjaca, these have migrated to America under names like prune roll, or Pittsburgh nut roll. But my family always called them Polish rolls. We didn’t actually have any Polish heritage to speak of in our family, but our beloved Aunt Betty (one of my Dad’s four younger sisters) married a Polish guy and got this recipe from her mother-in-law. You think of it more as a Christmas or Easter treat, but I get impatient to have some as soon as the weather turns cold and so to me it’s perfect for Thanksgiving. My whole extended family has decided they agree. We often used canned filling to make the poppy seed or prune variety, and our nut filling (pecan instead of the more common walnut) is simplicity itself with just five ingredients.
A lot of recipes for this—OK, every one I have ever seen except my own—recommend such quaint practices as proofing the yeast, scalding the milk, and various periods of resting the dough overnight in the fridge, or letting it rise and punching it down. Some of the recipes use powdered sugar instead of flour for dusting, or have a confectioner’s glaze or even icing. That’s all well and good, but our recipe dates from the 1950s and doesn’t have any of that. And it works, so just trust.
Pastry ingredients for two large or three small rolls
½ lb. unsalted butter (2 “sticks”)
1 tbsp. sour cream
3 cups all-purpose flour
3 tbsp. granulated sugar
½ cup milk
4 eggs, separated
1 pkg. active dry yeast
Filling of your choice (Solo poppy seed, Solo prune, or nut filling (below))
Nut filling ingredients (enough for two rolls)
1 ½ cups pecans, ground coarsely
1 egg white
1 cup brown sugar
½ tsp. vanilla
Pinch of salt
Put two of the egg whites into a small container and whisk them until just frothy, not foamy. Make the filling, if using, with half the remaining egg whites (i.e., one). Just combine the ingredients. Open the cans and check the filling if using that. (Sometimes these things sit on the shelf for decades.)
Preheat the oven to 350 degrees F. Grease a large sheet pan and line it with parchment. For the rest, you’ll need three bowls, a rolling pin (floured), a floured surface for rolling, a candy thermometer, and a small saucepan. In the largest bowl, cream the butter and sour cream together. In the medium-sized bowl, put the flour in, add the sugar, and whisk them together. Put the milk in the saucepan and warm it to exactly 100 degrees F. Put the milk into the smallest bowl and add the egg yolks and the yeast, and whisk it until smooth.
Add 1/3 of dry mixture and 1/3 of milk mixture to the large bowl with the butter mixture and stir with a wooden spoon until combined. Repeat twice more so it’s all in. Rub a little butter on your clean hands and knead the mixture in the bowl very well, at least five minutes, until it’s elastic and glossy. Divide the dough in half (or thirds for smaller rolls).
Roll each portion out into a rectangle about ½ an inch thick, about 9 by 12 inches if you divided dough into two parts. Spread filling from one short edge to about an inch shy of the opposite edge, and ½ inch in from the two long edges. Roll from the full edge to the other short edge, tucking the ends in so no filling shows. (At this point you can freeze the dough if you want to bake some or all later.) Place the rolls far enough apart to allow some expansion in baking, seam down. Bake them for about 50 minutes, then remove them and paint the top and sides with egg wash. Return to the oven for 10 to 15 more minutes. Keep checking because oven temperatures vary and you don’t want them to get too brown. Let the rolls cool to room temperature on a rack if you have one, then cut them into thin slices for serving. If you’re keeping one for later, leave it unsliced and wrap it tightly in foil.
—Debra Keefer Ramage

Mix ingredients together. Chill.
This is a favorite at our Thanksgiving table, and is usually the first leftover to disappear.
—Bridgit Jordan

Mom’s Tomato Mac & Cheese
4 cups uncooked medium shell
pasta
1 cup milk
1 egg
4-5 medium tomatoes
16 oz sharp cheddar, shredded
Preheat oven to 375.
Cook pasta al dente.
Blanch and peel tomatoes, then dice.
Whisk egg into milk.
After pasta is done, drain and cool a few minutes, then mix with egg/milk mixture, tomatoes, 2/3 of cheese, salt & pepper,
Pour it all into a buttered (or sprayed) casserole dish, cover, and bake for about 40 minutes.
When knife comes out clean (so you know the egg is done), remove the cover and sprinkle on the rest of the cheese. Put it under the broiler until cheese melts and begins to brown. Delicious warm, but also great for leftovers!
The first family Thanksgiving after I became a vegetarian, I came home to find my mother making MOUNTAINS of her mac & cheese. She said she knew I would eat that, even if I didn’t eat any of the other holiday foods!

Jackie Schmidt’s Quick Cobbler
3/4 cup flour
3/4 cup sugar
3/4 cup milk
4 tbs butter
tsp baking powder
dash of salt
2 cups fresh sliced peaches (or one large can if fresh not available)
Cinnamon-sugar (1/2 cup sugar with 1 tablespoon cinnamon)
Set oven at 350.
Put butter in 8-inch casserole dish, and set into warming oven to melt.
Remove dish from oven when butter melts, and put sliced peaches into butter.
Mix flour, sugar, milk, baking powder & salt.
Pour mixture over peaches, and sprinkle with about 2 tbs of cinnamon-sugar.
Bake in 350 oven until cobble browns and fruit is soft, about 50 minutes. Delicious hot, alone or with vanilla ice cream.
When I was a kid, I liked cold leftover cobbler with milk on it for breakfast.
—Rebecca James

This is a tale of the recipes of three women: my grandma, my mom, and my mother-in-law, and the piquant red dishes they served to accompany Thanksgiving turkey and stuffing. Grandma’s was the easiest, and also the most unappealing to me as a kid: Open a can of jellied cranberries from both ends, slide the quivering red mass onto a pretty china plate, and set it on the table. Make sure to leave it intact, so the indentations from the can add a decorative touch. Voilà.
My mom, on the other hand, always cooked fresh whole cranberries from a recipe straight out of the Betty Crocker cookbook. Here it is if you don’t have it. I still make it myself every year.

Cranberry Sauce
Wash 4 cups fresh cranberries. Stir together 2 cups water and 2 cups sugar in saucepan. Heat to boiling; boil 5 minutes. Stir in cranberries. Heat to boiling; boil rapidly 5 minutes. Cool. Cover; refrigerate at least 8 hours.
This is super easy to make; the best part is hearing the cranberries pop their skins in the boiling water. I never make a whole batch, or else I would have cranberry sauce till Groundhog’s Day. Just cut the recipe in half. Don’t skimp on the sugar! I know 2 cups is a lot, but just go with it. Also, it doesn’t have to be refrigerated for a full 8 hours—half that time is plenty.
Those years when my mom and my grandma were together at the same Thanksgiving dinner, we had both kinds of cranberries, the jellied canned ones and the fresh cooked ones. Everyone remained civil.
Enter my mother-in-law. Her proud Danish heritage required her to make Rødkaal (Red Cabbage) for holiday meals that involved roast fowl, whether Thanksgiving or Christmas. I had my misgivings at first, but quickly came to love the dish. Here’s the recipe:

Red Cabbage (Rødkaal)
Shred 1 medium red cabbage. Heat 2 Tbsp. butter (or bacon fat if you want to go big) and stir in cabbage until all parts are touched by the hot fat. Add ½ cup vinegar, ½ cup water, ¼ cup sugar, 1 tsp. salt, a pinch of ground cloves, and a bay leaf. Cover and simmer until tender. Stir in ¼ cup currant jelly.
This recipe also can be easily cut in half, to fit the size of your gathering. I love the way the aroma fills the house, so I make it now, too, every year. My Thanksgiving plate always has two spots of red on it—my mom’s bright magenta, sweet-tart cranberry sauce, and my mother-in-law’s deep maroon, sweet-and-sour rødkaal. The best of both worlds. But as for the jellied cranberries in a can? Sorry, Grandma—I love you dearly, but no can do.
—Katherine Schaefer