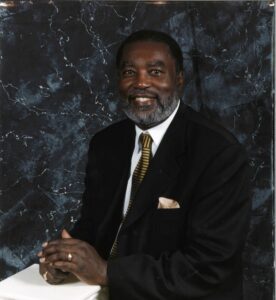 Pastor Supt. Vernell Thomas has served over 60 years in the ministry and as Pastor of Greater St. Paul Church of God in Christ for 53 years. He began his ministry at age 19 under the leadership of Supt. D.L. Smith of Texas. He moved from Texas to Milwaukee, Wis., where he continued his ministry. There he met the love of his life, Loretta Ann Lee. They were married Dec. 20, 1957. They had six children. He was called to St. Paul Church of God in Christ in Minneapolis, Minn., in 1966, where he continued to minister until the Lord called him home.
Our community as a church under the prayerful guidance of the Pastor Supt. Vernell Thomas and First Lady Loretta Thomas is recognized as a church of love that continues to stand for the Word of God with no compromise. We are equipped with several ministries to meet the needs of the total man. A ministry which includes: family ministry, bible study, worship service, women’s and men’s ministry, children/youth ministry, and prison ministry.
Pastor Supt. Vernell Thomas transitioned from earth to glory on Sunday, Nov. 10, 2019, at 10:30 a.m., surrounded by family. By faith his legacy will continue with the church, his loving wife of 62 years, Loretta Thomas, and their children: Anita (Edward III) Smith; Vernell Jr. (Beatrice); Lori; Darren (Sheran); Kevin (Darcey); along with 16 grandchildren and 22 great-grandchildren. He also leaves his sister, Essie Armstrong, brothers Plural Thomas (Eloise), Manor (Billie Jo), and Jean. He was preceded in death by daughter Sharon, his father, S. Thomas, and his mother, Varrie Thomas.
“The steps of a good man are ordered by God and he delighteth in his way.” Psalm 37:23
Celebration of Life service will be held at Greater St. Paul Church, 4001 4th Ave. S., Mpls. 55409, on Friday, Nov. 22, at 6 p.m. and Saturday, Nov. 23, at 10 a.m.