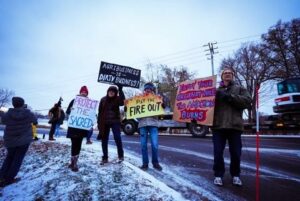 MINNEAPOLIS – Twenty riled-up citizens from across Minnesota convened at the Interlachen Country Club early Thursday morning to pressure Cargill to stop burning rainforests, protect indigenous lands, and switch to regenerative agricultural practices. Inside the country club, Cargill CEO David MacLennan addressed the “Lifelong Learning Through Leadership” breakfast to an audience affiliated with the Gustavus College Alumni and Gustavus Women in Leadership, whose members had learned about the company’s environmental record minutes before while passing the protest.
Gathering at 6:30 a.m. on the snow-covered roadside on the blustery 21-degree day, the activists demanded rapid changes from Cargill, which Mighty Earth named “Worst Company in the World” earlier this year.
The demonstrators were met by half a dozen police officers, waiting in the parking lot to prevent activists from getting inside. The action unfolded along the road, where attendees spoke of the urgent need to stand up for indigenous rights and protect rainforests—while waving signs at drivers who were on their way to the event.
Five years ago, Cargill pledged to eliminate deforestation from its supply chain by 2020. This year the company reneged on that commitment. Meanwhile, Cargill’s activities have been found to be directly tied to unlawful land grabs from indigenous communities and human rights and child labor abuses.
Cargill’s activities have sparked waves of protests throughout the country. In September, more than 50 activists staged a die-in at the Cargill-funded Minneapolis Institute of Art—calling out the company’s role in driving the Amazon fires. The next month, Cargill executive Ruth Kimmelshue drew a large crowd of protestors in New York during a speaking engagement with the Wall Street Journal. Cargill was also the focus of protest in the bucolic New England town of Amherst, Mass., where trustees of Amherst college—including Cargill CEO David MacLennan—had to wade through dozens of student protestors calling out the company’s influence within the university en route to their board meeting. On this past Halloween, protesters congregated outside of MacLennan’s home in Edina, Minn., staging a “funeral for the Earth” and decrying the burning of the Amazon.
The fires are no accident. The Bolsonaro regime is actively encouraging guerilla farmers, loggers and miners to invade and burn indigenous territories so that they can be stolen for global commodities trading purposes such as with Cargill. This is part of an explicit campaign of indigenous genocide and ecocide. According to the Guardian, Bolsonaro has explicitly admitted that “the recognition of indigenous land is an obstacle to agribusiness.”