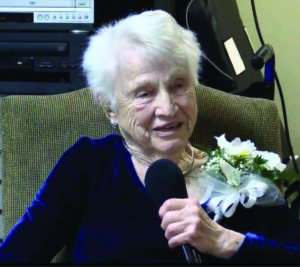 A joyful party at the Kenwood Isles condominiums in Minneapolis celebrated Polly Mann’s 100 years on a November afternoon with live music, sing-along and rap songs, original poems, pretty flowers, laughter, foods, bubbly beverages and memories. There were SPEAK TRUTH TO POWER fortune cookies, sugar cookies in the shape of 100, giant-sized cards for everyone to sign that stated “Speak Truth to Polly” and delicious sheet cakes adorned with peace signs. A Certificate of Recognition from the State of Minnesota, signed by the governor, was presented. Polly, of course, is best known as a founder of WAMM (Women Against Military Madness) in 1982 and as a current columnist for Southside Pride https://southsidepride.com/columnists/polly-mann/.
During the gathering, 200 admirers listened to brief stories related by family members and several people who have been touched by Polly’s life and activism over the years. In the background, a slide show projected images from those very full years while people spoke about Polly’s campaign for U.S. Senate in the late 1980s; the years of WPA (Women’s Political Alliance) that Polly initiated for lobbying and advocacy at the State Capitol; and Polly’s crisp decline of the invitation for WAMM women to appear on The Oprah Winfrey Show because promotional material had described them as “communist housewives.” (They were offended, saying, “We’re not ‘housewives’!”)
One man recalled Polly’s support and advice in 1967, when she worked in the book store at Southwest State University, Marshall, Minn., where he was a student. He protested the war in Vietnam and had been arrested on several federal charges for his resistance actions. Polly raised his bail, helped him weigh his decisions, and became “the only light in that dark time of my life.”
Polly—ever the gracious lady—thanked all who arrived, made donations to WAMM in her honor, and sang or spoke lovely tributes. She recalled the impact of seeing a vicious session of bayonet practice when she was a young woman working at an Arkansas army base. That, and the history books she read, “set me on a path and I’ve never stopped.”
One of the speakers suggested, “WAMM is Polly’s gift to all of us. Because, if it weren’t for WAMM, how would we all have found each other?” And because one of Polly’s slogans for WAMM is “never a meeting without an action,” all present—and all reading this article or watching the festivities on the WAMM Facebook page—are encouraged to call the offices of Senators Amy Klobuchar (612-727-5220) and Tina Smith (651-221-1016), this month, to press for their support of the U.S. signing the Prohibition of Nuclear Weapons Treaty.

Read Polly Mann’s Southside Pride columns: From Where I Stand