That’s what it sounds like, “Git outta here!”
The Planning Commission last month just approved zoning changes that will ultimately mean the removal of communities of color and those of us who live in the inner city in affordable housing and replace us with Young Urban Professionals in five-story apartment buildings.
I wrote the following to the Planning Commission and the City Council:
You are being asked to approve staff recommendations for guidelines for development projects of 20 or more units that will accompany inclusionary zoning changes anticipated in December. The recommendations are from your consultant, Grounded Solutions:
“Draft Policy Recommendations—Minneapolis Inclusionary Zoning, October 2019, On-site Affordability Requirements, Rental—
• Option 1: 8% of units affordable at 60% of Area Median Income (AMI); no City financial assistance; revisit after 18 months
• Option 2: 20% of units affordable at 50% of AMI; City financial assistance (Tax-Increment Financing) available
• Option 3: Half the 60% AMI requirement (4% of units) affordable at 30% of AMI; no City financial assistance.”
The area median income for Minneapolis is $60,789. In an apartment building of 20 units, Option 1 would require 1.6 units be made available to people earning $36,473.40 or less a year. Option 2 would require 4 of the units be made available to people earning $30,395.50 or less a year. And Option 3 would make 8/10 of 1 percent of 1 unit available to persons earning $18,236.50 or less a year.
This cannot seriously be called creating affordable housing.
The proposed inclusionary zoning changes will allow three-, four- and five-story apartment buildings in the inner city, from Broadway to 42nd Street South. These changes will not affect the traditionally white neighborhoods. Renters who live in the affected areas who have found affordable housing will be evicted and removed. Communities of color will be gentrified and be replaced by young urban professionals.
One out of every five people living in Minneapolis (20.7 percent) is living in poverty. They earn less than $25,750 a year for a family of four. https://datausa.io/profile/geo/minneapolis-mn/
By eliminating existing affordable housing, this new policy will dramatically make things much worse.
It is critically important for the Planning Commission and the City Council to appreciate that the author of this plan, Grounded Solutions, is the creature of the same banking interests that created the housing crisis of 2008. Last month’s National Conference was sponsored by Wells Fargo (a “Game Changing Sponsor”); Citibank (a “Visionary Sponsor”); Fannie Mae and JPMorgan Chase & Co. (“Benefactor Sponsors”). The chair of the Executive Committee of Grounded Solutions is Robert Burns; he is also the senior vice president of Community Development for Citibank.
As you know, it was racist redlining by Wells Fargo and US Bank that enabled high closing costs and high interest rates that doomed the African-American community in North Minneapolis and created economic hardships in South Minneapolis.
We reported in Southside Pride:
“The wheels of justice grind slowly but exceedingly fine.
“Sometimes it takes an earthquake to shake up City Hall. In this case it was Myron Orfield’s report on housing discrimination in the Twin Cities metropolitan area, which documented that the area lost $20.5 billion as a result of racist redlining in lending practices by mortgage bankers in the Twin Cities. Most of that money was lost to homeowners who had to pay higher interest rates and higher origination fees, but a lot of money was lost to municipalities and counties that saw their tax base shrink as a result of foreclosures.”

The municipal elections also spelled doom for the re-election hopes of Betsy Hodges and Blong Yang, who had refused to prosecute Wells Fargo and US Bank for their racist crimes against the people of Minneapolis.
But now, this City Council, after the fox has eaten the chickens, wants advice from the fox about what to do next and how to get more chickens.
This City Council has the power to end homelessness in Minneapolis. It could require all new apartment construction be required to rent only to people living in poverty. Rents would be subsidized by federal, state and county funds, but the program would actually save those governments money because it would be treating one of the principal causes of legal and medical problems for homeless people, and an ounce of prevention would be worth a pound of cure.
There are all sorts of possibilities, but the Grounded Solutions plan seems to offer too little empathy for affordable housing for the people who can least afford it. The banks need to be at the table, but they shouldn’t monopolize the conversation. We need to take some time to listen to solutions from people who have had some experience with poverty and homelessness.
I would respectfully request that the Planning Commission advise the City Council to pause in their deliberations and consider the effect these changes will have on the inner city.
Further, the Planning Commission might consider directing staff to consult with those communities most affected by the lack of affordable housing and design housing priorities that best offer solutions to their problems.
Finally, there is a great deal of concern in the Powderhorn community about the dramatic increase in property taxes for next year caused by increased valuation. Are the city assessors already anticipating the speculative prices of anxious developers?
It is sad to think our houses are worth more if we’re not in them.

People are right to be concerned about displacement and gentrification in our City. As more people move to Minneapolis, current low-income residents are at a greater risk of being displaced. So-called “Naturally Occurring Affordable Housing” is being converted to higher-rent housing. It is getting harder for families to be able to afford to buy a home, and the homeownership gap between whites and people of color in Minneapolis is among the widest in the nation. Renters are often trapped in an exploitative rental market with unstable, unhealthy and undesirable housing options. People continue to experience homelessness in Minneapolis. Family homelessness has declined, but the number of unsheltered single adults has increased.
This crisis has many different causes, including the overall economy, the lack of affordable housing units, and particular barriers that some people experiencing homelessness—including the opiate crisis—are facing. This has put tremendous strain not only on service providers but also on neighborhoods, public safety services and more.
Buildings continue to be the main driver of carbon emissions in Minneapolis, with housing as a significant subset. Energy burden is part of overall housing cost burden, and falls disproportionately on the poorest residents. It is also often a “hidden” cost of housing, not included in the rent or mortgage payments that are communicated at the time someone chooses a home. Increasing energy efficiency reduces not only climate impacts but overall housing costs. And housing that is badly maintained can lead to a number of different health problems, including lead poisoning, asthma and more.
To address these problems related to housing, the City of Minneapolis has taken a number of actions since 2017 to build, rehab and stabilize affordable housing; to promote home ownership; to reduce racial disparities; to address homelessness; and to increase energy efficiency in housing—and we need to do more.
We have accelerated investment in affordable housing, passed renter protections, initiated a Missing Middle Housing pilot program, approved an energy disclosure ordinance, provided energy efficiency support, created a 4d program to provide property tax reductions for landlords who offer lower rents, passed an advance notice of sale ordinance, and funded renter legal services for those who need them.
Still, we need to do more.
To meet this ongoing challenge, the City of Minneapolis should consider a number of additional policy solutions, including: an inclusionary housing ordinance that would require some affordable units to be included in new apartment buildings; a tenant opportunity to purchase policy that would give renters the right to purchase the buildings they live in when the owner of the building wants to sell it; rent stabilization laws that would limit rent increases; inclusive financing tools that would allow residents—both homeowners and renters—to pay for energy efficiency improvements through energy savings; tenant relocation assistance rules that would require relocation costs for tenants to be paid by owners of buildings that lose their rental licenses; a sustainable building policy that requires all buildings—including housing—that are supported by the city to meet a higher energy and environmental performance standard; bigger investments and a new levy dedicated to public housing; greater flexibility to allow more affordable and innovative housing options like intentional community cluster developments, accessory dwelling units on more properties, and single room occupancy.
As the number of people who want to live in Minneapolis grows, the rising cost of housing has resulted in too many families struggling, and often failing, to cover housing costs. The free market system has failed to meet the housing needs in our city. Our city government can and should do more to ensure that all our residents have a healthy, safe and decent home to live in. 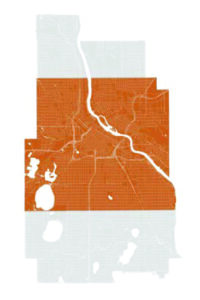 From the 2040 Plan
adopted by the City Council: “In neighborhood interiors that contain a mix of housing types from single-family homes to apartments, increase housing choice and supply by allowing new housing within that existing range.”