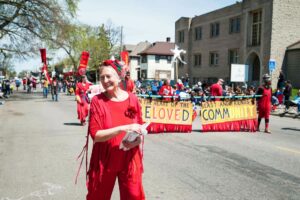 Dear Ed Felien, Deb Keefer Ramage, and Dave Tilsen:
I saw the heading “Celebrate Mayday,” so of course I had to pick up this issue: The November 2019 Nokomis edition.
I am glad that you wish to see Mayday celebrations continue, and that you wish to uphold the Free Speech and Worker tradition of Mayday, and the “sacred ritual of Mayday dating back thousands of years.”
From someone who cared for these roots and tended this gathering for 45 years, I challenge these things:
—If YOU invite people to the park, it is common courtesy for YOU to provide for their well-being. The puppet theatre assured restroom facilities from the very first year, and listened to voices from neighbors and participants asking for more toilet facilities year after year. Or perhaps those of you who live along the park are able to open your homes to people who need to pee? Is that a possibility? Maybe you want to reconsider “We will not set up porta-potties.”
—It is also common courtesy to respect the workers who tend this beautiful park by applying for a permit. There is lots of invisible work that goes into taking care of this Park, and the workers love this place and care for it as much as you do.
Thanks for listening and thank you for the many years of support of In the Heart of the Beast Theatre and Mayday.
Respectfully,
—Sandy Spieler, Lover of Mayday, Powderhorn Park and all of its kin (and former director of In the Heart of the Beast Theatre’s Mayday for 45 years)
——
Debra Keefer Ramage wrote:
I didn’t get Sandy’s letter, so I am not sure of the context, but let me share my vision for the future of MayDay, which I did share with the consultant they hired in a one-to-one interview, but I felt ever so slightly condescended to and dismissed. I think MayDay’s problem is it’s way too big for its restricted venue, and I think the solution to its being too big is to do cell division and grow. But grow in separate spaces.
Perhaps my idea was dismissed because it just sounds too hard to get from here to there, but I would love to see another 45 years of MayDay, but in say 10 separate Minneapolis locations. We could still have the original MayDay at Powderhorn, but how about if there were similar smaller festivals in North Minneapolis, Northeast, Prospect Park, Seward by the Mississippi, Loring Park, Diamond Lake, MLK Park and marching along Nicollet? All of which would draw people away from Midtown, so there would be more room for parking, less exhausting walks for elders and disabled and little toddlers, fewer portapotties required, more room for food vendors to branch out and not be intensely competing in a single space, opportunity for kids in other Minneapolis neighborhoods to have “their own” parade.
I don’t really see a downside, and many upsides. After seeding these celebrations in other areas, HOBT could step back and give each one to another arts nonprofit to manage, perhaps some created just for MayDay. In a way, it would be like Open Streets, except I think it would be important that they all occur on the same day, or at least the same weekend. Because the point would be for attendees to pick only one and go to it, preferably the one closest to them, so that total driving around is reduced even as total attendance goes up, and one neighborhood doesn’t have to take the entire strain of accommodating 60,000+ people.
—Debra Keefer Ramage
——
David Tilsen wrote:
Thanks for your letter.
I remember back in 1973, at a meeting in an attic in what I remember as a church building near 24th and Cedar. You and Ray St. Louis and a few members of The Alive and Trucking Theater were in attendance. You presented your vision to create a new regular community traditional holiday for South Minneapolis. You (or Ray) talked about the importance that celebrations play in building and strengthening communities. This discussion led to the first Mayday March and gathering, (which I performed at). I have never missed a MayDay since. My children actually travel from wherever they live to be here for Mayday every year. This celebration is part of our family lore, discussion and arguments.
Your (PPT and HOBT) work on birthing and nurturing the festival through its infancy, youth and adolescence has been epic, artistic, courageous, and we will always owe you a great debt of love and appreciation. Like all children who outgrow their parentage, Mayday will have a different life going forward.
None of us knows what will happen. HOBT’s process envisions some new organization that will continue to shepherd the celebration and take care of both the artistic expression and the administration of the details of the celebration.
I believe these two roles are different, and actually inhibit each other.
I believe the Park Board needs to recognize that the community flocks to the park on MayDay and they need to be ready with porta-potties, dumpsters, etc. We pay a lot of taxes to them and we don’t even get fireworks. How often do 70,000 people gather in 12 square blocks for a day in the inner city with joy, fun, and no violence?
—David Tilsen
——
Ed Felien wrote:
I agree with Deb’s vision of smaller and more Mayday celebrations: Let a Hundred Flowers Blossom, Let a Hundred Maydays Contend.
I agree with David that it is the Park Board’s responsibility to provide porta-potties. Before I read Sandy’s letter I had sent the following to the Park Board:

Seasons’ Greetings:
Southside Pride readers would like to know what sort of plans the Park Board has for Mayday 2020. For almost half a century, around 50,000 people have gathered on the first Sunday in May to celebrate Mayday. Although Heart of the Beast Theater is not organizing the event this year, it is reasonable to assume thousands will still want to celebrate in Powderhorn Park. Have you made plans for that? Will you provide adequate sanitary facilities?
—Ed Felien

I received this reply:
Hi, Ed.
We have a number of staff out over the next few weeks for the holidays, but we should be able to get back to you in January 2020.
Best,
—Robin Smothers, Communications and Marketing

So, we are in discussions with the Park Board about porta-potties.
Sage Berglund wrote and said that she and her sister would be making papier mache puppets by the Lake at the site of the Tree of Life.

Dhann Polnau wrote:
Upon the announcement of cancellation Jason Heisler somehow created a nonprofit and procured a parade and festival permit. His intention is just to ensure Mayday happens. He has no other agenda and wants anyone and everyone to join the table. Just the catalyst. Jason is one of the founders of the Hard Times Café.
Many parties from near and far are planning to claim that space on that day and make shit happen. This includes the HOBT sun canoe flotilla wants to paddle as well as the tree of life puppet crew wants to raise the tree! So, I was asked to create a community puppet pageant on that same footprint at the same time–are there going to be 4 or 5 “ceremonies” each vying for that spot?
—Dhann Polnau

I contacted Jason Heisler. He wrote:
Just waiting to hear from two people before I give out the date and place of the Board Meeting. We are applying for a Park permit. It’s only $1200. The food vendors will pay the Park Board 10 percent of sales. We hire the porta-potties. Our meetings have been at Hosmer Library. Board elections have been postponed till January.
—Jason Heisler

I haven’t heard back from Jason since the holidays, but it seems like an organization is being formed and people are intent on re-creating Mayday in the familiar tradition. And they will take responsibility for providing porta-potties. 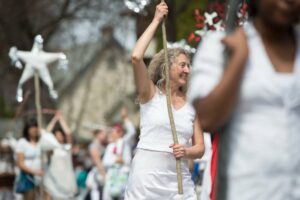