Equity is the root of it all 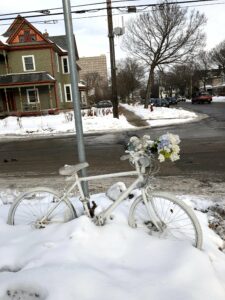 This ghost bike stands as a monument at the lethal intersection.

The other day while crossing the street with my family (including my 2-and-a-half-year-old) an oncoming car slowed to a stop. The car behind that one, however, sped up and aggressively passed the first car on the right. Luckily, my family had just made it to the opposite curb, but the reckless driver was definitely too close for comfort.
The intersection we were crossing is a notoriously dangerous one. Visibility is difficult for both pedestrians and drivers owing to cars parked tightly on both sides of the street, and cars are almost always speeding through. It’s also one of the few routes through the neighborhood to the freeway (other routes were largely closed off during the ’80s and ’90s as part of neighborhood “traffic calming” measures). A ghost bike stands as a monument to how lethal this intersection truly is.
The City of Minneapolis has adopted “Vision Zero: A Plan for Safer Streets in Minneapolis” (https://www.visionzerompls.com/). “Vision Zero” originated in 1990s Sweden and has spread across Europe and now into American cities. At its heart it is a new perspective on traffic safety, where traditional road system design assumes perfect adherence and emphasizes individual responsibility, “Vision Zero” designs roadways with the assumption of user error and uses a systems approach to design roadways that decrease fatalities (https://visionzeronetwork.org/about/what-is-vision-zero/). As a part of this, the City of Minneapolis has included traffic enforcement as a potential action within their plan. Open Streets has criticized this part of the plan, given the danger police pose to people of color in our communities (https://www.ourstreetsmpls.org/vision_zero_action_plan_launch).
Immediately after the asshole sped past us, my first thought was, “If we could trust the police, having a car stationed at that intersection would solve/improve the safety of this intersection.” But we CAN’T trust the police. Open Streets rightly points out that increased police enforcement is problematic so long as the police are given carte blanche with the lives of our residents. So, we need to go further.
If we as a city, and as a greater society as well, don’t tackle police brutality head on, we will never be able to have complete streets that are safe for all modes of transit in walkable, livable communities. If we don’t place equity at the center of all we do, we won’t be able to avoid the greater catastrophes of climate change.
And can I just point out the obvious irony of using the police as a tool to save lives when they so regularly take them without consequence.