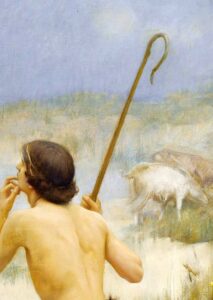 Obnoxious plutocrats and Donald Trump have given golf a bad name. That’s too bad, because it really has an honorable history.
It’s probably the oldest game played with a stick and a ball.
Our ancestors in Egypt, thousands of years before they crossed the Sinai Desert into the Promised Land, were farmers and shepherds. Shepherds carried a long stick to prod sheep back into the fold if they strayed too far. Sometimes they would use their stick to try to hit a stone into a sheep’s butt to negatively reinforce bad behavior. If they had a friend with them, they could compete to see who could hit the sheep, and then, who could hit the tree. And then, much later, Scottish shepherds got very solemn about it, and they eliminated the sheep and gave it written rules.
Sometimes, in the morning, just before dawn, when I’m standing over a silly golf ball with a club in my hands, I wonder, “What am I doing here?” And I smile, and I think, “I am honoring my ancestors.”