Minneapolis Public Schools and The Tower of Babel 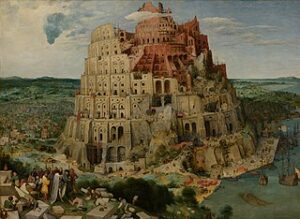 Last year the Minneapolis Public Schools (MPS) District lost 1,500 students, more than 80 percent of them students of color. Enrollment was 45,011 in 2000. Today it’s 35,717. How does the School Board react to this obvious vote of no confidence? They want to eliminate six more schools. They want to further centralize, eliminate the small schools and make the big schools even bigger.
Don’t they know that’s exactly what’s driving parents away from public schools? Schools are already too big and too scary. Parents look at the size of those schools and they don’t believe their child will get the attention and education they need.
It is extremely difficult to get accurate information from the MPS. I have written asking for current budgets and have received no response. The last year for which I could get data was fiscal year 2012 – 2013. The Superintendent’s Office got $1,192,291. The chief executive officer got $675,083. The total expenditures for administration and maintenance were $167,882,825. The total allocation for teaching was $286,477,985. Administrative costs were 36.9 percent of the total. Generally, in evaluating charitable or government programs, any administrative costs over 15 percent are considered a waste of money. Charities are generally not funded if their costs go over 30 percent. Federal programs specify a 15 percent administrative overhead. 36.9 percent means bloat and waste and a more impenetrable bureaucracy.
Bureaucracies are a natural result of the concentration of power. The king or superintendent of schools decides they need more help doing some of the mundane stuff so they can be free to do the really more important stuff. So, kings establish a class of nobility and superintendents create area superintendents. The more layers of government one can create means the one at the top is more and more important. And, since it’s efficient to have everyone under one roof, they build bigger and bigger palaces to broadcast their magnificence.
King Nebuchadnezzar ruled the very advanced Mesopotamian Empire in the 6th century BCE. He built a tower in Babylon to house his government that was the grandest structure of its kind anywhere in the known world. He had the world’s greatest library, a collection of Sumerian literature that contained the early telling of the story of Adam and Eve. He had to tax everybody to pay for it. Most countries went along with it, but the Jews in Israel refused.
In 597 BCE he besieged the city and carried away the rich and powerful. Ten years later he had to do it again, and he carried away Ezekiel and Ezra. Five years after that, he destroyed the Temple and carried away most of the people of Jerusalem.
By the rivers of Babylon, there we sat down
Yeah, we wept, when we remembered Zion
There the wicked
Carried us away in captivity
Required from us a song
Now how shall we sing the Lord’s song in a strange land?
—By Brent Dowe and Trevor McNaughton
The Jerusalem royal families and their court were probably kept in the Tower in the center of Babylon. It was probably in the library there that Ezekiel and Ezra wrote the first five books of the Bible, and where Ezekiel saw the wheel inside another wheel and, probably, the story of the captivity in Babylon inside the story of the flight from Egypt.
The Persian king, Cyrus, defeated the Babylonians in 539. He freed the Jews to return to Israel, and he gave them money to rebuild their Temple. It is tempting to believe he was generous because he was grateful for the assistance the Jews might have given him in overthrowing the Babylonians. If the Tower of Babel is a description of current events as well as a criticism of the dangers of a mountainous bureaucracy, then perhaps the seven plagues in Exodus that forced the Pharaohs of Egypt to free the Jews could be seen as a metaphorical description of the resistance of the Jews in Babylon and a handbook for guerrilla tactics.
The dangers of a swollen bureaucracy are even more apparent in the example of China. For almost 2,000 years the Chinese developed a civil service exam that produced a scholarly class that ran the government, but by the middle of the 19th century, the exam had lost touch with reality. It didn’t take into consideration the industrial revolution or the interference of foreign imperial powers. French, German, English and American financial interests ruled China, and in their Foreign Concession in Shanghai the sign read, “No Chinese or dogs allowed.”
The Minneapolis Public School system needs to think smaller, not bigger. They need to develop childcare and early childhood education within a block of a child’s home. They need to have elementary schools small enough so every child can meet and know every other child. The middle schools and high schools should be much smaller, too. We don’t need a school large enough to field a great football team because, thankfully, schools aren’t playing as much football as they used to.
Bigger is not better. Small is beautiful. The scale of a building and an educational program must be measured from the perspective of the intended object. Young people need to believe their learning environment is knowable and within their control.
Unfortunately, the Minneapolis Public Schools system seems determined to go in the opposite direction and continue its death spiral into extinction.
“Let us build us a city and a tower, whose top may reach unto heaven”; but the LORD condemned them for their arrogance and pride and “did there confound the language of all the earth: and from thence did the LORD scatter them abroad upon the face of all the earth.”
—Genesis 11:1-9