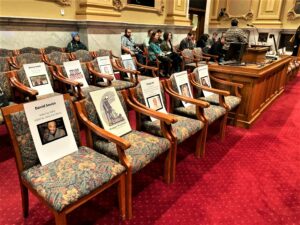 BY LEX HORAN,
RECLAIM THE BLOCK

The Minneapolis City Council on Wednesday, Dec. 11, approved a budget that gives the Minneapolis Police Department (MPD) an $8.2 million raise, bringing its budget to a total of more than $193 million, while allocating comparatively insignificant funds to preventative and public health programs that build safety.
Throughout the budget process, hundreds of community members voiced their support of Reclaim the Block’s demands to invest in programs like mental health response, solutions to the opioid crisis and youth homelessness programming instead of continuing to grow MPD’s budget.
Nevertheless, the city council approved a budget that has had almost no changes to MPD’s bottom line since Mayor Frey drafted it.
“Hearing and centering the most vulnerable members of our communities means not investing more in the police state,” said
Nicque Mabrey in testimony before the council. “We’re here as your friends, as people who have been with you along the way since before you were elected. We have a partnership here. To invest more money into the police is a breach of that relationship. It’s disrespectful.”
While the mayor has claimed a compromise for shifting his proposed 14 new hires into funding for a new MPD cadet class, that amendment will still result in a larger police budget and a larger force. Most cadet classes include 38 cadets on the onramp to becoming MPD officers.
“So many of us were thrilled two years ago when we thought we had just elected one of the most progressive city councils in the country,” said testifier Kristen Wiseman of Reclaim the Block. “Being progressive means making hard political decisions to move us forward, not being stuck in the status quo. You all aren’t
leading us forward progressively—you’re not even following the lead of your constituents who spoke up last week.”
To create a visual representation of the city’s funding priorities, one testifier dumped $193 one-dollar bills on the dais to represent MPD’s $193.4 million budget, and held up a single quarter to represent the $242,000 that the city agreed to move into the Office of Violence Prevention (OVP) out of MPD’s budget.
The council did amend the budget to respond to some community demands, including a position to enforce wage theft, a Trans Equity staff position and additional funds for the OVP. The council also passed staff directions related to a diversion program for low-level “quality of life” crimes and researching the racial equity impacts of traffic enforcement policies and practices.
Reclaim the Block and supporters demanded that council members commit to working with the community in coming years toward more substantial change.
Before passing this year’s budget, only three members of the council (Council Members Bender, Ellison and Gordon) said they would work with community to invest in non-police safety strategies.