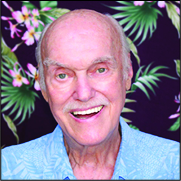 When Ram Dass (formerly known as Richard Alpert, sometimes known as RD), died on Dec. 22, 2019, at age 88 in Maui, I had recently returned from Maui, where I had gone to attend a retreat with Ram Dass entitled “Open Your Heart in Paradise.” People considered me very lucky to have been with RD less than two weeks before his passing, and I was lucky indeed. It was my fourth time attending one of his retreats and each time was magical and uplifiting.
Back in 1972 when I worked at Savran’s Paperback Shop (I was married to the owner, Bill Savran), we received the book “Be Here Now” by Ram Dass. I immediately read the book and it changed my life, just like it changed the whole generation of New Age hippies, seekers, meditators and yoga practitioners. Tim Leary had coined the phrase “turn on, tune out, drop out” several years earlier and “Be Here Now” became the blueprint on how to accomplish Leary’s message.
Ram Dass’ life started with privilege, along with Leary. He experimented with LSD at Harvard, got fired, went to India, met his guru, Neem Karoli Baba, came back to the U.S., wrote “Be Here Now” and numerous books, was the subject of several films, started many service organizations and then had a debilitating stroke in 1997 and eventually moved to Maui. Despite the stroke and health issues, he continued to teach until the end.
Over the years, Ram Dass came to Minneapolis many times and I never missed seeing him here. I also travelled to workshops and retreats where Ram Dass was presenting. I considered him my guru. Since his passing I have read many, many tributes to RD. The most important teaching that RD shared with the world came from his guru, Neem Karoli Baba: “Love other people and serve them all.” Based on the four retreats with RD that I attended, I can attest to the fact that he practiced what he learned from his teacher. His radiant presence made each and every person he encountered feel that unconditional love we all yearn to give and to receive. The last words I heard him speak were: “I am loving awareness.”