Andrew and Sean talk safety in the ‘hood

Standish-Ericsson Neighborhood Association (SENA) hosted an open meeting under the auspices of the Crime and Safety Committee on Jan. 22 at Sibley Park. Executive director of SENA Candace Lopez played host, and two expert speakers—Council Member Andrew Johnson (Ward 12) and Inspector Sean McGinty (Precinct 3)—were there to listen to citizen concerns and answer questions. The gathering attracted 20-some neighborhood members, overwhelmingly white homeowners. with a single person of color. I happen to be a member of the SENA board and I attended in the dual role of interested citizen and press. So far, only one other attendee responded after the meeting on E-democracy with feedback, mostly negative. There were probably lots more responses on Next Door, but I don’t subscribe to ND so I can’t report on that.
In fact, Next Door was a major topic of conversation. It was only a few years after its introduction that the iffy relationship between ND, crime prevention, law enforcement agencies, and neighbors’ paranoia and racial profiling, began hitting the news. An article on the current state of play appeared in Vox.com last May, “The rise of fear-based social media…” (see it at https://bit.ly/2RHLspG.) Andrew summed it up in a speech about the upsides and downsides of ND. On the positive side, ND is great at finding lost dogs and cats, or getting recommendations for handypersons and cleaning services. One woman at the meeting said that she had a package stolen and only knew about it because of Next Door! But users of ND can gravitate toward a mild form of vigilantism, and this gives rise to the major conundrum that our mostly negative attendee stated in his feedback. Citizens, both BIPOC and white, believe that crime is on the rise, and that the discrepancy with crime statistics, which have been falling sharply since the early 1990s, is due to less reporting of crimes. But on the other hand, they also believe, for varying reasons, that there’s no point in reporting crimes and so don’t report and advise others not to! White people tend to believe that the police will ignore or downplay the crimes and thus not solve them, or that the system of justice doesn’t honor or help victims enough. BIPOC believe the same, plus widely believe that the cops will make things worse, or possibly kill someone.
Of course, law enforcement can only put crimes into the data pool if they are reported. One of the questioners at the meeting wanted the police to “monitor” ND, but there are a number of reasons, legal, procedural and practical, why that won’t work, not least that ND’s own policy restricts what they can see on ND. In any case, Sean made it clear that he stays off of social media entirely. Andrew, on the other hand, is a known technophile with a love for policy-wonking, and understands fully the tensions around neighborhood media, laws and perceptions. When he kicked off the session by saying that the city had “invested in” public safety by hiring 114 new officers, of which 38 would be a net increase to the force (after retirements, etc.), I immediately wanted to ask, is that the sole investment? Is this evidence-based, i.e., that the best or only way to reduce crime is to hire more cops? What other “investments” is the city making in terms of funded programs that don’t involve simply upping the numbers?
When I finally got to ask that question, a door to a wealth of information about the Minneapolis Police (MPD) was opened up. And Andrew gave me a five-page report put out by Mayor Frey’s office about all the funded (and non-) policy changes, programs and new ordinances from 2016 to the present that have been directed at increasing public safety and changing “police culture” for the better. I had no idea of the social media outreach and data transparency that the MPD had achieved in recent years. Check out www.insidempd.com and see, especially the Data Dashboard, and the Interactive Crime Mapping, and see who’s in charge these days at Command Staff. All the personnel at MPD are accessible by phone or email and Sean was handing out business cards. The mayor’s handout featured such hopeful developments as proactive U-visa assistance for undocumented crime victims, “know-your-rights” placards in squad cars, a unit dedicated to outreach to homeless and vulnerable populations, forbidding so-called “warrior” training, and guidelines for misdemeanor arrests, interacting with transgender individuals, and interacting with medical personnel.
I’ll leave you with one interesting statistic gleaned from the meeting. Thefts of cars take over as the leading crime in the winter. So far this winter, 60 cars have been stolen, mostly by youths, and of those, 53 had been left running and unlocked when they were taken. Our E-democracy respondent said Sean was blaming the victim here, but I’m sure his intent was more of a helpful tip to prevent your car from being stolen. 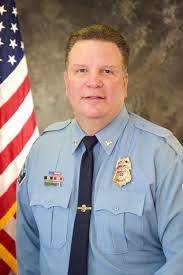