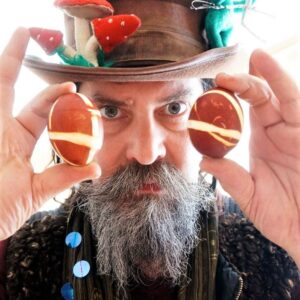 Dahnn Polnau, from sometime unknown to 2020 and into our hearts, page 3

Mike Hazard probably wrote the best obituary for Dahnn. It’s on Facebook:
Dhann Polnau reveled in puppetry.
Daniel Polnau was Dan Dan the Puppet Man, Magick Man, Decolonizer of Darkness, Wizard’s Magician, a weirdo, a saint, and a fabricator of tall tales of the highest caliber, a beautiful creator and wonderfully wild soul, street magician, a Knight of the Imagination, wild man, wise man, fool who traversed the worlds, master of no one, who knew the profane is sacred, making puppets a threat again, kind, kind magician, a mischievous misfit who seeped into the pores, and soul, of everyone he met, utopian radical clown critic, crazy dude, one of the most magical, hilarious, dangerous, messy, daring, generous, and excellent people we will ever know, fantastical truth-teller, master prankster puppeteer, ringleader, stinking hippy, an American shaman in the Siberian mold, big heart, Emperor of Babies, a pusher of limits, of respectability, subverting expectations and piercing through our socially constructed barriers to our/a point of connectivity, with all creatures and energies, Garbagiano who dreamed of a plastic-free world, supreme example of an evolved human, progenitor of Baba Yaga, one of the purest incarnate forms of creativity that ever lived, transcendent and infernal being, breaker of all rules, Dr. Strombolli.

Dahnn wrote to me after my article “Celebrate Mayday” appeared in the November Southside Pride editions:
Hello,
So HOBT is taking a year off from mayday????
Nobody thinks this is a good idea!
HOBT crowdsourced for money last year at the 11 o’clock hour and made over 50k in the black for the first time ever.
One couple had a pancake breakfast that made 3 g.
Many many people who donated feel duped, angry by the cancellation of Mayday.
Are saying publicly they will never donate again.
But,
To be clear, it’s not HOBT that decided to cancel Mayday
Or the descision of an informed and savvy board of directors that decided—
It is one man,
Corrie zoll.
He says, as a mantra, that it’s” not a sustainable business model “
(45 years is not evidence of sustainability?
50k surplus is not sustainability???)
Zoll has been very enthused about selling the building since day one of taking the job.
He has talked of hobt not doing puppets anymore since day one.
He has wanted hobt to not be burdened w mayday anymore.
He is the man who fired the entire artistic staff and most of admin staff, including Sandy Spieler.
At any rate,
Upon the announcement of cancellation Jason Heisler somehow created a non profit
And procured a parade and festival permit.
His intention is just to ensure Mayday happens
He has no other agenda and wants anyone and everyone to join the table.
Just the catalyst.
(Jason is one of the founders of the hard times cafe,
And, is incidentally the father of the 21 yr old man Kobe that cops emptied their guns into his back when he ran away in Brooklyn center recently
The cops have twice busted down this grieving father’s door and held a gun to his head to intimidate him. And have been harassing the wheelchair bound grandmother, telling her it is her fault.
Okay—irrelevant sidebar I realize!
But I am cannot resist mentioning this.)
Anyhow,
I am sympatico with all of your sentiments about the politics of assembly and Mayday and all of it.
But the governmental permission slip has already been granted and the fees and all the hoops that have to be jumped thru.
Whatismore,
Many parties from near and far are planning to claim that space on that day and make shit happen—
This includes the hobt sun canoe flotilla wants to paddle as well as the tree of life puppet crew wants to raise the tree!
So,
I was asked to create a community puppet pageant on that same footprint at the same time—
Are there going to be 4 or 5 “ceremonies” each vying for that spot?
Hobt said “cancelled”
Not— “ a slightly truncated version will happen “
And,
It seems various parties are organizing music for the same stages and areas.
This could be a giant cluster fuck, possibly w sparks flying, if we don’t somehow join forces and fathom how to make this all work.
We all want basically the same thing.
Thoughts????

I wrote back:
My personal prejudice is against amplification, against police “protection,” and against permits—but I’m willing to adjust. I also think the long Mayday parade is a waste of time. Nothing could happen in the Park until the Parade was over and HOBT set up for the Tree of Life. I think it would be better to let everyone into the Park, listen to music and political speeches and, at some point, have a parade around the Lake (and maybe the ballfields). Otherwise we’re waiting for three hours on Bloomington Avenue for something to happen.
What do you think?

Dahnn answered back:
Could not agree with you more about long parade!
Love opening up festival.
There was talk of a parade around the lake as well.
If there is a parade on Bloomington it will not have the usual lengthy Hobt puppet section. I know the punk battle train is onboard.
But again,
There is no puppet parade proper being built.
I will be pageant/ceremony focused— something strong and powerful and relevant to come across that lake and on that field. But hopefully not too long and over complicated and abstract.
I love non amplification for music!
But fear it might be a losing battle at this point— but let’s try!!
Facebook page is in order.
This will get interesting
I am in India til January 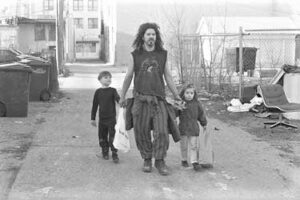