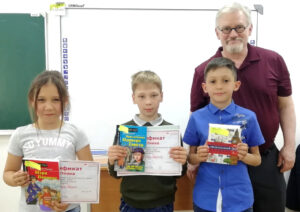 Tom Dickinson is a multi-faceted person who lives in the Powderhorn neighborhood. Friends and neighbors know him as a concert pianist, a Buddhist (Kwan Um School of Zen), an activist (WAMM committee Tackling Torture at the Top), a cat-lover, and/or as the founder and president of an organization called Siberian Bridges, which links people in the Zabaikalsky region of Siberia (toward the eastern side of Russia) with people in the Upper Midwest.
Everything that led to Tom’s connection with Siberia is intertwined with the other facets of his life. It started … Well, where did it start?
While Tom was studying piano performance at Yale (where he later got his doctorate), he started playing concerts. He played in London, England; in Taiwan; in Alaska; almost in Korea. Next, the idea of a tour in China came up. A good friend from Yale, Craig, who lived in Taiwan and was familiar with Chinese culture, convinced Tom to set up the tour in person, face to face, and not through the mail.
When Tom went to China, in 1988, he was scared. The airport was yellow and gray, dingy, scary and bleak. He was going off the map—into Communist China. He had never done anything so “foreign.”
Mr. Yang, the guide/interpreter Craig recommended, was with him, though, supportive in every way. He even took it upon himself to also become Tom’s concert tour agent.
On the train between Shenyang and Harbin, Tom met six men from the remote Siberian city of Chita, about 250 kilometers from the border with China. Just four months earlier, in August, the border between China and Russia had opened after being closed since 1922. Reagan and Gorbachev had signed the INF Treaty nuclear arms control accord in 1987, and now the U.S. military had been to Chita, a major Soviet military base, to remove the nuclear warheads.
Now Siberia could do business with China. Free to cross the border, the Siberians—five sales reps along with their interpreter—were giddy with excitement and kept showing off their international passports.
They never dreamed that on top of everything else, they would meet an American, and Tom also never dreamed he would meet a group of Russians.
The Siberians and their interpreter, Sergei, with whom Tom is still friends, invited Tom to play a concert in Chita.
Growing up in a middle class, white, suburban, mainstream U.S. environment, Tom had always heard Russia and Communism presented in a negative way. Tom was saying to himself, “These guys are Russians. Aren’t they supposed to be the enemy?” But they didn’t seem like enemies.
As a result of his trip through China, Tom made arrangements to play concerts the next year in Chita, Siberia, as well as in four Chinese cities: Harbin, Shenyang, Beijing and Shanghai.
In 1989, after his China tour was over, Tom set off for Chita, this time without Mr. Yang. He took the slow train from Harbin, which only went as far as the border. There, he expected to catch the Russian train to Chita, but there was nothing there, no buildings, no platform, no tracks, no town—only a flat, dusty plain, hot and bright. Really tired, he stood there staring at the vast expanse of land. 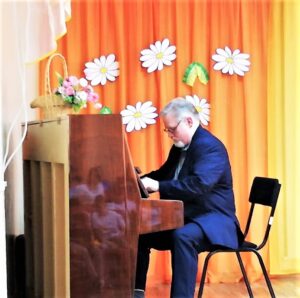 Piano concert at Library No. 5, Chita

Suddenly, he was surrounded by a group of men who showed him the way to a nearby town. In a restaurant, they crowded around a small table and ordered him northern Chinese food, thick and substantial, like beef stew. The men, from Kazakhstan, were determined to show Tom the maximum in hospitality. Potent alcohol was flowing, spirits were high and everyone was singing. Tom felt pretty wiped out. They put him up in their dormitory room in an adorable hotel. In the morning, Sergei, the interpreter, was there to get Tom onto the train to Chita.
Tom was in Chita for four days. People he met asked him why he was in Chita (which is “nowhere”) instead of in Moscow (which is “somewhere”).
He played a concert on a bright red “Moscow” piano in a music school packed to capacity with people hanging out the doors. He was the first Western artist to cross the Sino-Russo border since 1959.
He was invited to a picnic outside the city at a friend’s dacha, or cabin. It was their custom to go to the countryside, make shishkebobs, hang out and have a Russian banya (sauna).
Amid much toasting, everyone agreed that they never thought Russia and China would ever be friends but they were, and they never thought they’d meet an American.
Tom felt the same awe. His parents had never talked politics exactly, but he had always received the message about “the evil enemy,” on TV, in the culture, in the air. He can’t believe how much he had been indoctrinated against the “Commies,” whether Chinese or Russian.
In Chita he discovered that, “I had missed so much by not knowing there are people in the world living full, rich lives and they have nothing to do with my view of the world.”
* * * * * * * * *
Since Siberian Bridges was formed, in 1993 (first as Musical Bridges), Tom has been back to Chita many times, staying there once for a stretch of 10 months.
He believes that the inherent bias of Americans (from the U.S.) is to think their country is superior and can “help” others. He feels it’s important to cultivate mutuality in Siberian Bridges, where both cultures propose projects they want to work on and both cultures are open to learning from each other. He wants ideas to come from both sides and both sides work on them. It is important that we U.S. Americans not impose our ideas. People in other cultures are equally valid. He likes to get news about Russia from his friends in Chita—to see the international panorama through their eyes.
Siberian Bridges is trying to establish regular tours of the Zabaikalsky region. In past years, Dickinson has led groups of people from the U.S. on tours in Siberia. Hopefully there will be a tour in 2020 or 2021. It will be for travelers from the U.S. together with Siberian travelers who are learning English—and others of any nationality are welcome.
For more detailed information about Zabaikalye, please go to Siberian Bridges’ stunning website at siberianbridges.org. (Go to thomasdickinsonpianist.net for information about creative piano study.)