Pennies for the poor, big bucks for the rich 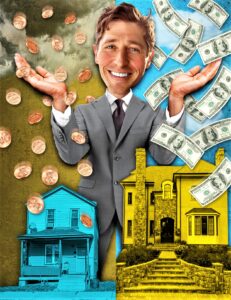 In late 2019, Center for Urban and Regional Affairs (CURA), a department of the University of Minnesota, announced that it had been hired by the City of Minneapolis in response to the City Council’s call for a consultant to “complete the resident-led process of furthering the Neighborhoods 2020 framework and developing program guidelines at the ‘Collaborate’ level of engagement based on the International Association of Public Participation Spectrum.”
In response to recent public reporting by CURA and recent statements made by CURA spokespersons to media, we conducted an analysis to test several findings reported by CURA:
• Historical allocations were not based on a racial equity premises [sic].
• The primary benefactor [sic] of this work is white homeowners.
• The outcome of the work is racial inequity (institutional racism) largely driven by the Neighborhood Revitalization Program (NRP) allocations.
• The City of Minneapolis Community Participation Program (CPP) for neighborhood organizations is more equitable than NRP.
Our analysis relies on a more complete data set than that apparently used by CURA, including demographic data from Neighborhood Housing Services (NHS), NRP PlanNet data for neighborhood allocations, and NRP PlanNet data for contracts and expenditures. We also reviewed previous studies of the NRP program. Our analysis finds that:
• NRP allocations were more heavily weighted to the most diverse and low-income neighborhoods in Minneapolis;
• CPP allocations were not more equitable than NRP allocations, and were, unlike NRP allocations, neutral in regards to neighborhood diversity or average household income.
• CPP allocations represented a major disinvestment in the most diverse and low-income communities when compared to NRP allocations.
• White affluent homeowners were not the primary beneficiaries of NRP home loan and grant programs. More complete data shows that, particularly in early years of NRP, black and low-income homeowners were major beneficiaries of NRP home loans.
• Many other types of neighborhood NRP housing programs directly benefited communities of color, low-income communities, and special needs communities (addiction, living with HIV/AIDS, seniors and disabilities as examples).
Our examination finds that CURA was negligent at best in their use of data and subsequent analysis of facts. Their use of data raises concerns about cherry-picking of data, and bias in their analysis. Because CURA apparently did little to verify the accuracy or completeness of their data, or to show any independence from the city in collecting data, their study is neither valid nor reliable. We believe CURA’s conclusions, particularly about the primary beneficiaries of NRP home loan programs, and racial inequity of NRP allocations, are simply not supported based on all of the evidence available.
Why the attack on NRP? Because it is not just an attack on NRP. It is an attack on the idea that NRP represented.
NRP was based on the idea that residents are valuable partners in identifying the needs and shaping solutions for their communities. But the city has long embraced the idea that, to be as efficient as possible, community decisions should be left to the “experts” at City Hall. In that model, residents are reduced to the role of “customers” or “clients.” This model puts most, if not all, of the power in the hands of the city.
Interestingly, CURA’s recommendations say nothing about actually changing the relations of power between the City and the community. Their recommendation: Keep the “experts” (like themselves) in charge.