BY STEVE MCKEOWN AND MARIE BRAUN

The year 2020 marks the 50th anniversary of the Nuclear Nonproliferation Treaty (NNT), which includes Article 6 indicating that the nuclear nations agree to reduce their nuclear arsenals to zero. 2020 also marks the 75th anniversary of the bombing of Hiroshima and Nagasaki and the 65th anniversary of the St. Paul-Nagasaki Sister relationship.
One of the most heartfelt times in Minnesota history, the nation, and indeed the world happened in the Twin Cities on June 3, 1990. The occasion was the then-Soviet Premier Mikhail Gorbachev and his wife, Raisa, gracing our state with a visit. It was a time of hope, and led to nuclear disarmament of no small matter between our two countries. At the height of the Cold War, the world had over 66,000 nuclear warheads held mainly by the United States and Russia; now worldwide there are about 14,000.
Today we are faced with the prospect of our government not renewing the New START (Strategic Arms Reduction Treaty) treaty. At the same time, we are seeing unrestrained nuclear development on the horizon in an ever-increasingly polarized world, prompting the Atomic Scientist to reset the Doomsday Clock at 100 seconds to midnight. Derek Johnson, executive director of Global Zero, reminds us that, “The loss of this treaty would set the U.S. and Russia on a path to nuclear anarchy: a state of affairs where legal constraints of nuclear arsenals has ended and norms of voluntary restraint are weak or nonexistent. We’d all be flying blind into a nuclear arms race.”
The good news is that on Dec. 5, 2019, President Putin again offered to immediately extend New START without preconditions. This treaty, signed in 2010 by U.S President Barack Obama and then-Russian President Dmitry Medvedev, limits each country to no more than 1,550 deployed nuclear warheads and 700 deployed missiles and bombers.
We also have the U.N. Treaty on the Prohibition of Nuclear Weapons agreed to by 122 nations on July 7, 2017. Unfortunately, none of the nine nuclear nations (United States, Russia, China, France, England, Pakistan, India, Israel, North Korea) have signed on; however, when 50 nations ratify this treaty—35 already have—it becomes international law. While it will be binding on only those countries that sign and ratify, it is hoped that this new powerful international legal standard will have the effect of stigmatizing nuclear weapons and compelling nations to take action on disarmament.
Many leaders around the world are speaking out against the threat of a new arms race. Former Soviet Premier Mikhail Gorbachev is again warning that “nuclear weapons need to be destroyed to prevent World War III.” Pope Francis has also been a strong voice in condemning not only the possession of these weapons, but also the very premise of nuclear deterrence.
We, too, believe that it is imperative that the U.S. join with other nations banning these horrendous weapons. Veterans for Peace, Chapter 27, and Women Against Military Madness have collected more than 23,000 signatures of people from all walks of life around the state of Minnesota. The Veterans’ Peace Bus has traveled to some of the most remote areas of the state to collect signatures from each of the 851 incorporated towns and cities in our state.
We are currently in the process of making appointments with members of the Minnesota Congressional Delegation in order to deliver these signatures to them and to call on them to speak out publicly in support of ratification of the Treaty on the Prohibition of Nuclear Weapons by the United States. We are also asking them to encourage others in Congress to support the coming together of the nine nuclear nations to work for the total elimination of these horrendous weapons, which, if ever used, could destroy civilization and put at risk the future of humankind and all life on earth.
If not now, when?

Steve McKeown is a member of Veterans for Peace and Marie Braun is with Women Against Military Madness. For information about the local WAMM 2020 Campaign to Ban Nuclear Weapons, contact the WAMM office at 612-827-5364 or WomenAgainstMilitaryMadness.org. 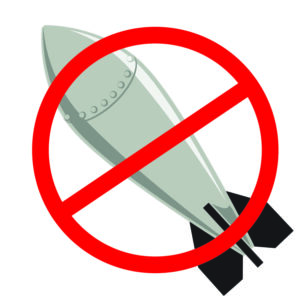