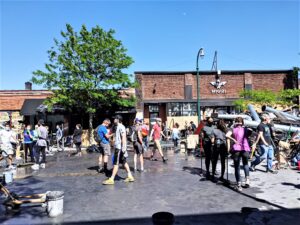 Native American populations, whether in urban areas, or rural communities, or on rural reservations, are hit disproportionately harder by COVID-19 than their white neighbors. In Minneapolis, Native Americans experience homelessness at a much greater rate than their population percentage. And they also have a long and troubled history of experiencing police violence, harassment, and yes, murder in Minneapolis and elsewhere in Minnesota. So however bad white folks have it now with the double whammy of a COVID lockdown of two months followed by a brutal police murder of a black citizen sparking weeks of civil unrest, know that Native Americans have it worse. Franklin Avenue from Cedar Avenue to 11th Avenue is known as the American Indian Cultural Corridor (AICC), and this is the area, along with Native institutions and businesses nearby, we are focusing on.
This is not a story about victims, though. This is a story about struggle—and resilience that wins the struggle.
The organization that defined the AICC is the Native American Community Development Institute (NACDI). They describe it as “the traditional heart of the city’s Native American community, as a place where both Indians and tourists can enjoy Native American food, art and culture on Franklin Avenue and in the Phillips Neighborhood of Minneapolis.” This presence is visible in the various American Indian institutions clustered on and around the avenue, including urban tribal offices, the American Indian Center, All My Relations Arts Gallery, Little Earth Housing Corporation, the American Indian Industrial Opportunities Center, and the Indian Health Board. 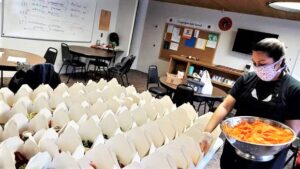 The Minneapolis American Indian Center, or MAIC, was closed to the public during the pandemic period and still remains closed as of this writing. But it’s not quiet in there. With most staff working from home, many of its programs continue. Its very popular eating establishment, Gatherings Cafe, helmed by Navajo gourmet chef Brian Yazzie, is one place still buzzing, just not with customers. MAIC has hosted weekday congregate dining for Native elders with meal delivery for shut-ins. Now that all the elders are shut-ins, Yazzie and his team plus a crew of volunteers are delivering daily meals to elders comprising mostly pre-colonial ingredients, many grown or foraged within or near the city.
One farm that Gatherings gets produce from is Dream of Wild Health. Yes! Magazine did a feature on them that explains their model and history (https://tinyurl.com/SSP1DoWH). Dream of Wild Health is a 10-acre nonprofit farm in Hugo, Minn., about 45 minutes north of the Twin Cities, that works to connect urban Indian people with not only healthy fresh produce, but the knowledge of how to grow and prepare this food. They have a youth program, a Community Supported Agriculture (CSA) program, and participate in the Four Sisters Farmers Market on the avenue. Check out the Four Sisters Farmers Market Facebook page for current information on the elders’ meal program, the market this summer, volunteer efforts following the George Floyd protests and associated destruction in Minneapolis neighborhoods, and a new online cookbook you can buy co-authored by Native chefs including Brian Yazzie and local celebrity Sean Sherman, the Sioux Chef. 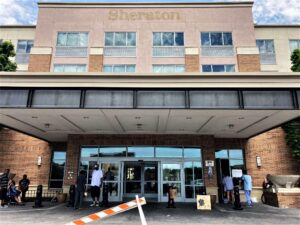 A few blocks off of Franklin Avenue on Bloomington Avenue is the All Nations Indian Church. Like most churches, they have gone online. The Circle newspaper (another great institution of the local Native community) talked to pastor Rev. Marlene Whiterabbit Helgemo, who said members of the church are finding crafty, high-tech ways to stay connected and comfort one another while the COVID-19 pandemic keeps them physically apart.
“We’re getting good at ‘Zooming’,” Helgemo said. “We Zoom it.”
With the uprising against the police and the status quo that followed within 24 hours of the police killing of George Floyd outside of Cup Foods on Chicago Avenue, the entire Twin Cities has experienced a wave of looting and arson. Just as bad was the sharp reaction from the state as well as some affected businesses. South Minneapolis was the epicenter of this chaos and loss. For nearly a week, there was no transit service, many essential businesses were closed, and there was a nightly curfew, with armed and dangerous MPD officers and National Guard enforcing it.
Right off the bat, the Native communities were in the thick of this struggle. George Floyd was killed on May 25 and as the sun rose on May 28, MIGIZI and the radio station housed in their offices were destroyed, a victim of the fires the night before that raged through the blocks around the 3rd Precinct Police Station. “MIGIZI Communications is gone,” Rosy Simas shared on Facebook. “My family and many others built this Native organization that has served the Native community for over 40 years. Archives are there. Yes, it is just a building. But to the Native community this is territory, a home we still had here. Our lands were stolen but we built this place for all people and many communities…” 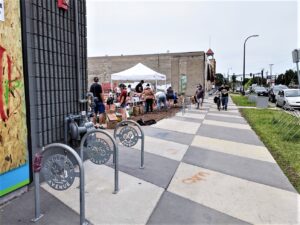 Robert Pilot, the host of Native Roots Radio, a local talk show that focuses on Native American issues and news, said MIGIZI was the first radio station in Minneapolis to serve Native people and trained many of Indian Country’s first radio personalities. The nonprofit’s offices were filled with valuable recordings of interviews with leaders of the American Indian Movement, which was founded in Minneapolis in 1968 to curb police violence, Pilot said.
On that same day, the third since Floyd’s murder, American Indian leaders of the Metropolitan Urban Indian Directors (MUID) called for healing, peace and harmony. “Let us start to heal … Let us see what we can create together,” their statement said. The MUID is a consortium that includes All Nations Indian Church, American Indian Community and Development Corporation, American Indian Movement (AIM) Interpretive Center, AIOIC, The Circle Newspaper, the Division of Indian Work, Dream of Wild Health, Indian Health Board of Minneapolis, Indigenous Peoples Task Force, Little Earth of United Tribes (LERA), MIGIZI, MAIC, the Minnesota Indian Women’s Resource Center Interim, the Mni Sota Fund, the Native American Community Clinic (NACC), NACDI, and the Nawayee Center School.
On the fourth day, May 29, the community went into action. AIM dispatched a “street patrol” in Minneapolis in solidarity with protests and to protect much-needed local businesses from looting. AIM’s president, Frank Paro, said in a video they released that police brutality is the reason for AIM’s original existence. He says in the ’60s the police would routinely beat Native Americans in Minneapolis. “They took us down to the river and left us there. If you were lucky, they took you to jail and you got medical 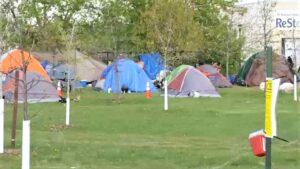 The largely Native homeless encampment near Hiawatha is growing due to COVID-19. Officials are calling it Camp Quarantine and are testing residents. Photo: KSTP.com

attention. But in the 2000s they’re not beating us no more. They’re killing us. That has to stop.”
Another institution taking care of its people was the Residents Association at Little Earth Housing, a Native-specific HUD subsidized housing association. Their watch patrol has effectively prevented any major damage in their complex, despite it being right in the heart of Phillips.
From Indianz.com, an online Native news source, on May 29: Darlene Day of the St. Paul arm of the American Indian Movement asked for Native people to take their drums and sing healing songs for protestors bent on looting and destruction. “I would ask you to work with your tobacco. I would ask you to sing your healing songs,” she said. “Everybody is feeling the actions that took place,” she said, before singing a healing song of her own with her sister, Charlene Day-Castro. [Day-Castro is the director of the Indigenous Womens’ Life Net/Bright Beginnings program at MAIC.] “Everybody understands that historical trauma hits us right here and stays with us.”
One of those local institutions that happens to sit on hard-hit Lake Street is the Division of Indian Work. An online news source, redlakenationnews.com, had this story: A group of Native American former servicemen have taken up positions outside the Division of Indian Work building on the corner of 10th Avenue and Lake Street to defend their small community and offer medical assistance to those who need it. This watch group had gained permission from the city and the state to be deputized to defend the corner, but on Friday night, they were stood down by the National Guard while defending Midtown Global Market.
For over a week, most of the essential businesses —particularly grocery stores, pharmacies, fast food places—were closed, the transit system was shut down, and many streets were impassable. Even the mail stopped, as the Minnehaha Post Office was one of the buildings burned. Police were not dependable, and fire and EMT services were stretched thin. On Thursday, June 4, the curfew ended, bus and mail service were back, and the violence was nearly quelled. Some of those businesses aren’t coming back for a while; some never are. 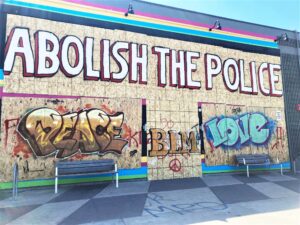 In the wake of this, impromptu volunteer mutual aid stations have sprung up all over the city. The new normal is not really normal, but we can expect to see these for a while, perhaps the whole summer.
The radio station burned out of MIGIZI has relocated to KFAI on the West Bank. MIGIZI is rebuilding. Franklin Avenue has largely survived. Here are links to some funds if you want to help.
Rebuild MIGIZI: https://www.givemn.org/story/E9kb8g
Little Earth Residents’ Association: https://www.givemn.org/organization/Littleearth
Dream of Wild Health – 2020 CSA is closed but you can donate at: https://dreamofwildhealth.org/get-involved-2/donate
Midtown Global Market Mend: https://www.gofundme.com/f/midtown-global-market/donate
Cultural Wellness Center Mobile Outreachand Outdoor Drop-In (MOODI): https://www.givemn.org/story/Mxmjeg
Unicorn Riot (video news of community and protests):https://unicornriot.ninja/donate/
If you want to offer help or get help for yourself or another, check out https://twin-cities-mutual-aid.org/.