America’s police are out of control. This is news to you?
White America hires cops to control blacks. This is called racism.
The Minneapolis cop did not murder Floyd. It was manslaughter. The prosecutor mangled it, but did he have the police union’s endorsement? Why didn’t he charge the driver in the Justine Damond shooting?
The city will suffer a humiliation when the four Minneapolis cops are restored. Their firings were illegal. Due process was sacrificed on the altar of expedience.
Did they murder Floyd?
No. They were teaching Floyd a lesson.
Have there been any attempts to control the thumpers in the ranks?
Our leaders have covered themselves in glory.
The cops were fired in violation of law. The union will emerge as heroes as they get the cops restored, arrange for their defense, make bail and secure a reversal. Later—much later—the cops will be convicted and legally fired.
Leaders will posture and declaim.
Lawyers, family and other members of the litigation industry will garner windfalls.
Talleyrand once said, “It is worse than a tragedy, it is a mistake.”
The tergiversations now underway mask some simple truths:
*The cops have their hero in the White House.
*Racism is alive and well and the cops make sure it is.
*Black leaders ride this wave cynically.
*Mayors are clueless.
*No police chief in America could be labeled a reformer—or seek to be. One did exist in NYC, but he lasted 30 months (Murphy, 1970-73).
So, let’s get real.
Yes, change will emerge.
Incremental, grudgingly and piecemeal. After all, we have abolished slavery, right.
Ask any black you know—are we a racist society?
I’ll rest on the answer.
And who controls and executes the unspoken instruments of racism?
Socrates suggested questionings.
The Bible enjoins us to get wisdom and, with all thy getting, get understanding.
Cassandra had the gift of prophecy and the curse of not being believed.

[Editor’s note: Tony Bouza built the 3rd Precinct station house. He consolidated the six former precinct stations to four because, “Buildings eat people. When I was talking to the architect I said, ‘I want a light, airy, welcoming building.’ And that’s what it was.” But, he admitted to me, it had become “a place with swastikas on the wall.”] 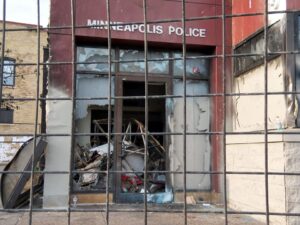