Matt Allen is with Ashley Huber 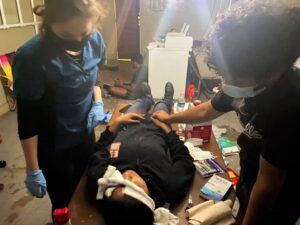 Tonight, the Minneapolis Police Department
Opened fire on our first aid station with no regard for the wounded people we had inside.
We were treating the 100% PEACEFUL protestors adults and teens who had come in with rubber bullet wounds, falls, scrapes and gashes, and mace/tear gas exposure when they marched in and began firing at us.
We put our hands up.
We shouted that we were first aid and were trying to help injured.
We shouted we had hurt people inside that could not walk.
Nurses, Medics, EMTs walked out in front and Identified themselves.
They fired gas, paint and rubber bullets into us like it was Call of Duty.
I was hit multiple times with my hands up before it became to much to take and I had to run with everyone else.
A young man who had hurt his leg and couldn’t run was almost trampled by people
fleeing the shots.
Some medics and myself grabbed him, put him in a wheeled office chair and started running him out of the #firstaid station while they fired rubber bullets into my back.
We got him into a random car as gas and more bullets rained down on us. I was pulled away by the crowd as a van full of cops came through and began shooting at us as we fled. 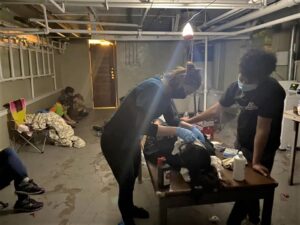 More gas
More rubber bullets
I ran as fast as I could until they finally stopped chasing us.
Finding my way to a friend’s basement nearby where the rest of my team had fled to.
While we hid
A young couple was also trying to leave the protests.
They turned a corner and the police officers hit them with their high powered flash light and then shot this girl directly in the face.
Random protestors formed a shield around them as the young man picked her up and ran.
By the sheer grace of God, they managed to stumble to the door of the place we were hiding in and were rushed down to the basement.
We frantically cleared a dirty laundry table as our AMAZING, FANTASTIC, BRAVE, SELFLESS, SUPERWOMAN Nurse (Ashley Huber who is a straight-up medical GODESS) scavenged all the supplies we had and managed to keep on us to treat this girl the best she could and probably saved her eye.
We are now huddled in the dark
Waiting for curfew to lift to get her the further help she needs
Because not a living soul in this probably traumatized group of civilians is going to call 911
After ambulances have repeatedly ignored our calls and the police are the ones who shot the small unarmed girl in the first place.
So, while I wait for sunrise
I would like to let everybody know
That if you open your mouth about how “those people” need to peacefully protest
Covid-19 or not
I’m going to get into your personal space.
MY team
Werewarriorsforjusticetonight.
The Minneapolis Police Department
Shot a small brown-skinned girl in the face because she was outside and upset that they murdered a black in broad daylight in front of people begging them to stop.