On Wednesday night, June 16, several hundred Powderhorn Park residents gathered together to hear statements from local activists regarding encampment at the park, now in its sixth day of occupancy. Hundreds of people without homes have sought shelter on the east and west sides of Powderhorn park, and the number of residents continues to rise. Before the encampment, the former Sheraton Hotel in Midtown was converted into a homeless shelter until residents were evicted and then later moved to the park.
From the statements, the activists’ messages were clear: a call to end homelessness in general. To do that, the community first needs to stand together and advocate for permanent housing.
Included among the speakers were representatives of the Powderhorn Park Neighborhood Association and Park Board Commissioners. Among other demands included an immediate response and resolution to the current housing crisis at the park by June 19.
“We have an opportunity to do something and to be something we have not been up until this point,” said Tabitha Montgomery, on the significance of communal advocacy. 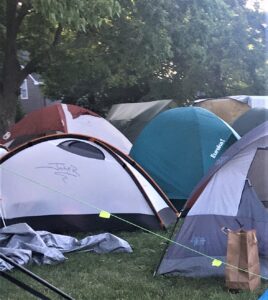 “This is not just a Powderhorn problem, a today problem, a last week problem … this is a complex, persistent, systematic problem,” said Lily Lamb, a lifelong Powderhorn resident. “We can close our doors and pretend this isn’t happening, or we can meet our new neighbors, and advocate for what they’re asking for. Housing is a human right. Everyone deserves to be safe in our community, whether you’re homed, or unhomed.”
A white resident raised his concerns about the potential dangers of being homeless. Citing an unnamed “homeless expert,” he mentioned that people without homes are often “preyed on” by sex traffickers and often succumb to prostitution, drugs and violence. “I’m not the only one in our neighborhood that has these concerns,” he said. I think without saying it, he was stating that the increase of homeless residents in the park raises the likelihood of danger for everyone in the neighborhood, and most people didn’t hear this point because his voice was drowned out by jeers.
Someone followed up on his remark saying that not every homeless person succumbs to drugs, sex trafficking and violence. Before the man could finish his thought, he was chastised by the crowd. “This is not your space!” someone yelled.
To put it forward, in order to solve issues like homelessness, we first need to hear from all sides in order to effectively solve this problem. Considering that being homeless does present dangerous circumstances, the man brought up an important fact. If the campers are safe, then the entire community is safe. So, the quicker we end this crisis, the safer everyone is.