Cedar Avenue and environs during the 2020 weirds

I encountered the above description of this time of this year and I … couldn’t really do better, so I’m “borrowing” it. Actually, things look a lot more normal on Cedar Avenue than most places in South Minneapolis, although nowhere is immune to the changes. Which may or may not be the warning tremors of the coming quake that will actually be the actual end of actual civilization as we know it.
Meanwhile—Sandcastle is open! Their patio is only for waiting, not eating. The main beach at Nokomis is open, though, and you 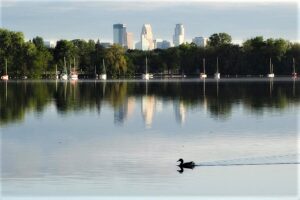 can eat in the park, or take it home of course. I guess the owners—chef Doug Flicker, spouse Amy Greeley (who also own the Bull’s Horn) and business partner Chele Payer—decided they were restaurateurs more than they were webmasters, so they have not updated their pre-order site with the takeout-only, slightly restricted menu. It makes sense, being only walk-up ordering and takeout service. Using a sandwich board is more flexible too. Yes, times are demanding, hard, sometimes traumatic, but still you gotta eat, right? Sandcastle is located on West Nokomis Parkway, but it’s a short walk across the park from Cedar and 50th Street.
If you go 10 blocks farther south on Cedar, but taking “Old Cedar” where it turns into a true highway, due to the twistiness around Lake Nokomis and the Crosstown, you can actually take a left onto a strip of Bloomington Avenue. This becomes Richfield Parkway and carries you past (or to) a strip mall with a fairly large Target and Home Depot. This is handy to know about, as these stores have become rather thin on the ground. There is a CVS Pharmacy in Target, and the usual other small spots clustered about, such as Chipotle and Noodles and Co.
Or we could continue struggling with home delivery for our big box purchases, and instead head north from 50th Street on Cedar and see what’s up. The construction where Bergan’s—the last of the South Minneapolis Super Valus—used to be, proceeds apace. The surrounding businesses appear to have all survived the COVID shutdowns, more or less, and a couple of new ones have appeared since last summer.
There are Grand Old Creamery and Caribou (with a drive-thru) on the east side, which share a patio. Also on the east side of the avenue, Carbone’s, which also delivers via Uber Eats, appears to be takeout only. Next door is Cork Dork Wine Shop, which also sells craft beers and spirits. They close two hours earlier (at 8 p.m. Monday -Saturday and 6 p.m. Sunday) and only allow four customers in the store at a time, since it’s a tiny (but carefully curated) shop.
Across the road, the Italian Eatery i.e. has been there almost long enough now to be considered an old-timer in the volatile restaurant world. Patio dining was a big thing with them and now that’s back, as well as highly restricted indoor dining. Here is the page that explains all the conditions and caveats and where you can make the mandatory reservations: https://www.italianeatery.com/reservations. This is a very popular restaurant, including with the critics, and they seem to have put a lot of thought into their safety plan.
Nearby, in this little cluster, you will find a Starbucks drive-thru, which also supports delivery through Uber Eats. There is also a 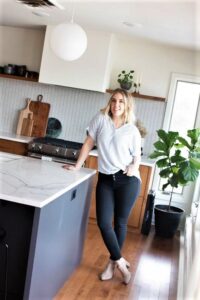 popcorn shop (Tom’s, 4708), which is all takeout and which is open as normal. And here you will find the two new businesses—Nailish (4706) and Jenny in the City (4704.) Nailish opened in the spring of 2019. They re-opened in June with reservation-only, 50% capacity, heightened sanitation practices, mandatory masks. They offer a complete menu of mani- and pedicures, and limited waxing.
Jenny in the City is a small but elegantly casual women’s clothing store. Featuring the modern vibe of subdued colors and little pattern, natural fabrics and generous fit, they sell tops, bottoms, shapewear, lounging clothes, accessories, casual, sun- and T-dresses in sizes S through 2X. Also a few shoes and booties. They have a rotating social causes T-shirt that donates 10 percent of sales to a rotating charity. All merch is available to order online with delivery at low rates, free for orders over $35. Besides Facebook and Instagram and an opt-in email letter, they have a website at shopjennyinthecity.com/.
At the corner of 42nd Street and Cedar, Groovy’s—a popular vintage junk, record and retro clothing store we have reviewed previously—was one of the first small retail establishments to re-open last month. I still have not managed to get by there, probably because I’m supposed to be downsizing, but I mean to. However, the nearby Southside Vintage and Quality Goods is one I have patronized, back when I was still in acquisition mode. They have a well-curated selection of small furnishings, patio furniture, accessories, 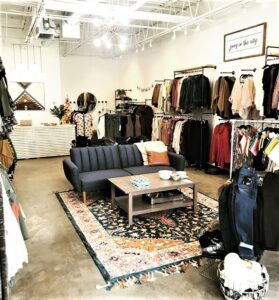 Jenny in the City interior

kitchen gadgets and tchotchkes, including toys and games.
This corner is dominated by 4200 Cedar Avenue, which houses many activist groups, including Communities United Against Police Brutality, and it suffered no damages that I know of in the rioting. 4200 Cedar is still not available for mass meetings as they cannot be done safely yet.
Diagonally across the road on the northeast corner are two great casual dining spots—Hamburguesas El Gordo and the Cedar Inn. Hamburguesas has obviously Mexican-style hamburgers. Also, Mexican-style hot dogs, tacos of all kinds including vegan, chips and guac, burritos, quesadillas, and the most excellent elote. They also have desserts and Mexican Coke and Jarritos, and a new offering—the Beyond vegan hot dog. They can be ordered through Bite Squad for delivery.
The Cedar Inn was sold to new owners in 2019 and their grand opening plans were disrupted by COVID-19. They are open now, and are also available through Bite Squad, but only food and soft drinks. However, they are a dive bar, and the bar is open with health restrictions. They have a nice patio which is very popular by the looks of it.
Moving northward along Cedar, we come to the normally busy corner of East 38th Street and Cedar. I can’t figure out what’s going on at some of these businesses, to tell the truth. It looks like Lucy’s, a very nice grocery-cum-deli-takeout run by a lovely Ethiopian woman (not named Lucy—the store is named after the famous archeological remains that proved we all originated in Africa), appears to be closed either permanently or for a long time. The Vintage Music store appears to be open as normal, as is the Candy Jar.
Duck Duck Coffee has been closed longer than most coffee shops but staying active with merch sales through Instagram and 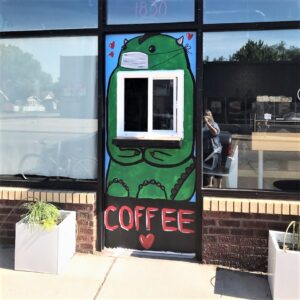 various mutual aid projects. Finally, they are selling coffee—via a newly installed walk-up to-go window. They are also receiving and distributing donations for the Powderhorn Sanctuary encampment. Their Instagram has the most up-to-date news.
Everett’s has had some problems. A case of COVID closed them for two weeks early in the pandemic. They were closed another two weeks after some damage in the rioting. They are now open again with slightly restricted hours. I was in there the other day and it was very nice. They reset the store by taking out an aisle to help with physical distancing, but still have a good selection of basic grocery needs, and of course, for meat and fish lovers, their excellent meat and fish section is as good as ever.
Matt’s Bar at 35th Street and Cedar is doing very well too. They have never had online ordering, as far as I know, but always had takeout for their food. And there was often a line to get in due to their beyond-the-Cities popularity as a dive bar. I have seen 6-foot-spaced (more or less) queues outside there a few times recently, so I guess they’re doing OK. And be warned, they are apparently still cash-only. How quaint.
Blackbird Music is open if you call first and make an appointment. Also, if you know what you want, you can get “curbside” service at the back door. But call. They’re closed Sunday and Monday as always.

The trend of taquerias popping up in convenience stores has hit Cedar Avenue at the Winner gas station at 34th Street and Cedar. Taqueria Las Cañadas is found there. I have not sampled their food, but it’s been there a couple of years and has Yelp reviews so probably fine. If you want to make your own tacos at home, there is a Mexican market called La Rosa at the corner of 32nd Street and Cedar. They have very good reviews, and also have a taqueria in the store. The La Rosa Taqueria serves more than tacos, including breakfast, and full dinners, and beer and wine. 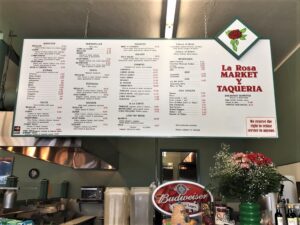 I’ve been making it a habit to close these with a free and appropriate walk or outdoor activity. The Pioneers and Soldiers Cemetery at Lake and Cedar is open Wednesday through Sunday from 8 a.m. to 4:30 p.m. Take a gentle ramble and stop to contemplate the many graves from the 1919-1920 influenza pandemic. And be careful out there. 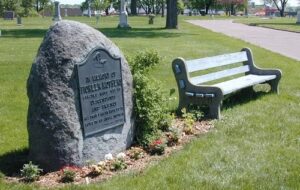