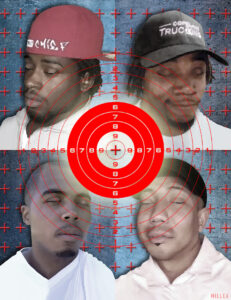 TerranceFranklin:
The city just agreed to pay $795,000 to the surviving family of Terrance Franklin rather than contest the wrongful death suit against MPD Officer Lucas Peterson. Peterson claimed in his police report that Terrance Franklin had taken control of Officer Durand’s MP5 automatic and was firing it, and he wounded Officers Muro and Meath, and, in order to save his fellow officers, Peterson ran into the line of fire wearing his bullet-proof vest and shot him. There are so many lies and improbabilities in this fairy tale, that the city thought better of trying to defend it in open court.
So, what did happen in that basement on 27th and Bryant on May 10, 2013?
It seems more likely that when Meath pulled Franklin out from the cubbyhole under the stairs and threw him into the room, Durand opened fire, killing Franklin and wounding the two officers.
But, we don’t know. There has never been a full public inquiry into the killing of Terrance Franklin.
Shouldn’t this be a matter for the City Council Public Safety Committee to investigate?
R. T. Rybak is volunteering the Minneapolis Foundation to help heal police-community relations. He was mayor and in charge of the police in 2013 when Franklin was killed. He could start the healing by reading the 200-page police report and then reading the medical examiner’s report, and then he could tell us what he thinks his MPD did to Terrance Franklin and whether his officers observed proper MPD protocol and were truthful in their reports.
And then we could begin to have accountability.
And then we could begin to have justice for Terrance Franklin.

Jamar Clark:
He went to a rowdy birthday party Sunday night, Nov. 15, 2015. Two women got into a fight. Somehow Jamar Clark and his girlfriend, RayAnn, got into that fight, and RayAnn ended up with a busted lip and a bruised ankle. Someone called 911. RayAnn told the paramedics that Clark was the one who hit her. The paramedics told the EMS supervisor, and the supervisor told Officers Schwarze and Ringgenberg. Clark had been tapping on the back door of the ambulance to try to talk to RayAnn. He was walking away with his hands at his sides when Ringgenberg came up from behind, put a hammerlock on him and dragged him to the ground. They fought on the ground. Ringgenberg says they continued to struggle and that Clark somehow got control of his gun. He then told Schwarze to open fire. Schwarze did. He shot Clark and Clark died. Some eyewitnesses said Clark was not resisting arrest, and some said he was in handcuffs. But there is no clear videotape of the incident.
Did Officers Schwarze and Ringgenberg follow protocol in confronting Clark? Did Officer Ringgenberg make sure his weapon was secure at all times? Was there an internal review of the officers’ actions? Shouldn’t that internal review become public, and shouldn’t the Public Safety Committee of the City Council hold a public hearing to receive that review?
The people of Minneapolis deserve closure on the killing of Jamar Clark.
Jamar Clark deserves justice.

Thurman Blevins:
He was drunk and disorderly, drinking Amsterdam Vodka straight from the bottle and flashing a gun, walking with his girlfriend while she was pushing their baby in a buggy. He sat down on a curb in North Minneapolis on June 23, 2018, and started talking to a dog. A neighbor had heard shots earlier and complained to 911. Officers Schmidt and Kelly pulled up in front of Blevins, jumped out of the car with guns drawn. Schmidt yelled, “Put your hands up. I will f—kin’ shoot you.” Blevins started running away, trying to get as much distance as possible between the police and his girlfriend and his baby. [Interesting parallels in the three cases: Franklin ditches the car so he doesn’t endanger his girlfriend and her two small children in a car chase, and Clark walks away from the ambulance to avoid involving his girlfriend in the confrontation with the police.] The officers chase Blevins down a block and into an alley. He’s shouting, “I didn’t do nothing bro. Please don’t shoot. Leave me alone.” The officers fire 14 times and hit Blevins four times and kill him.
Did the officers observe protocol? Shouldn’t there be a public review of the officers’ actions by the Public Safety Committee? Isn’t there a better way to de-escalate this kind of confrontation?
There’s a group of young Black men in North Minneapolis who call themselves the Minnesota Freedom Riders. They protected barber shops and small businesses during the riots, and they acted as security for Juneteenth celebrations. Wouldn’t it be a lot better for everyone if when the 911 operator gets a call, they called neighborhood people as the first responders. Yes, if guns are involved then you have to call the police, but shouldn’t we try to get people from the community to try to talk down the trouble before it gets out of hand?
The City Council says it wants to do away with the police. This is a great opportunity for them to put their money where their mouth is. Council Members Ellison and Cunningham should find the money to support the Minnesota Freedom Riders as one of many strategies to protect and serve our beloved communities, and the money and consequent supervision should come from the City of Minneapolis Department of Public Health, not from the MPD. Block clubs are an essential part of a community awareness, safety and security. Block club organizers should be paid by the city to talk to their neighbors about food and housing, education and vocational opportunities. They should be nosy aunts and uncles, worrying if the kids are being fed. And these block club organizers, these Welcome Wagon Comforters, would bring all sorts of information about social programs, educational opportunities and jobs. And they must be supervised and paid by the Department of Health, not by the MPD.
Travis Jordan:
On Nov. 9, 2018, at 1:58 p.m., his girlfriend called 911 to report Travis Jordan was depressed and threatening suicide. Officers Keyes and Walsh went to the house, banged on all the doors, and tried to confront him. He came out of the house with a kitchen knife. He was suicidal. He charged the officers and they shot and killed him.
He didn’t have to end like that. Travis Jordan didn’t have to die, even though he may have thought that was his only alternative that day. When 911 got the call, they should have sent out someone qualified to deal with suicidal depression. If there was a need for armed backup, then that should be immediately available, but the control agent of the situation must be the person trained to deal with depression and mental illness.
Terrance Franklin, Jamar Clark, Thurman Blevins, Travis Jordan: young Black men killed by our Minneapolis Police Department.
Justice demands a full accounting of how they died.
Justice demands those officers be disciplined if their actions violated protocol.
Justice must be blind, but she cannot be deaf.