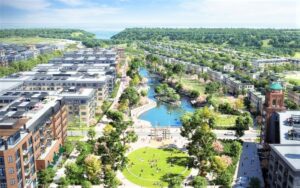 As we have been doing since March, this week’s focus on St. Paul’s Highland Park will be a geographical guide to services available and businesses open (or not) due to COVID-19. In addition, we will talk a bit about libraries, and a bit about homelessness in the Cities during the COVID pandemic, and then wrap up with a free nature walk suggestion.
But before we get into that, just briefly, Highland Park’s big story remains the same as before—the Ford Plant project, on which construction is now well and truly underway. Ryan Companies, the chosen developer for the site, along with its public and private developer partners, is apparently in the zoning/permitting stage for individual buildings. The Villager newspaper carried two articles recently about zoning variance decisions on the project, one for an income limited senior residence, and one for a mostly market rate complex with a large grocery store at street level. Both hearings approved some variances but denied others.
Announced at a recent “virtual groundbreaking”—the site also now has an official name—Highland Bridge. Learn more at highlandbridge.com. 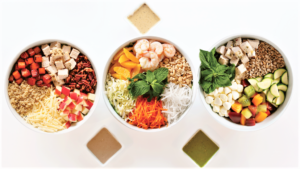 Turning to the existing built environment, and attendant commerce and other activities, I visited the Ford Parkway commercial hub a few times recently, including trips to Lunds & Byerlys.
Highland Park, unlike St. Paul’s University Avenue, was relatively untouched by rioting and looting following the George Floyd police murder protests. Lunds & Byerlys is back to normal hours, 6 a.m. to 10 p.m. Face covering is required. It’s pretty well-stocked with only occasional empty shelf spots.
Along the same strip, some businesses have reopened with hygiene measures—Massage Envy and Cost Cutters have regular hours but now require appointments (and masks). Also, here you’ll find a GNC nutritional supplements shop, a PostNet print shop, open as normal, a Potbelly Sandwich Shop and a Caribou Coffee, open for takeout or delivery only. An adjacent strip mall includes more of the same—a large Chuck and Don’s Pet Supply, Panera Bread, Noodles & Company, Starbucks, a Target Express, another haircutter, a nail bar and the Highland Bakery and Café.
Across the road is CRISP & GREEN, fairly recently opened by franchise partner Kris Humphreys, a former NBA player. This healthy fast-food restaurant (takeout or patio dining) replaced, in the fall of 2019, Pieology Pizza, another franchise, and also owned by a former pro athlete, Matt Kalil of the Vikings.
Other notable (and open) businesses on the north side of Ford Parkway include Bakers Square, Haskell’s Deli, ERIK’S Bike-Board-Ski, Patina gift shop (curbside pickup available), R.F. Moeller Jeweler, a fairly large Walgreens, Half Price Books and a
Dairy Queen.
Off of the Ford Parkway strip are some other nice spots in Highland Park, spots where you used to be able to hang out and chill, 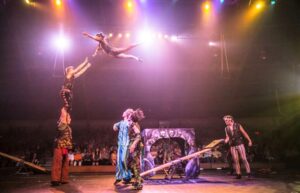 but now you have to settle for to-go, and maybe reduced hours. One just around the corner on Cleveland Avenue is Quixotic Coffee, which I used to favor for small meetings. They have excellent coffee drinks including nitro cold brew and also good things to eat. Use their website for online ordering. A little outside the boundaries of Highland Park, but not that far to go for such good stuff, is Hot Hands Pie and Biscuits at Snelling Avenue just south of St. Clair Avenue. They continue to offer “Pay It Forward,” where you can buy a discounted meal for a stranger in need, and now also offer patio dining. They have both walk-up and online ordering at hothandspie.com/.
Two great amenities that grace Highland Park include its branch of the St. Paul Library system, and its eponymous park. One is closed to the public, but with tons of contactless services (the library), and the other is open to the public, but with many of its services shuttered (the park.)

Libraries have been at the center of discussions about COVID-19 and community needs. As Deborah and James Fallows noted in Our Towns (Reporter’s Notebook feature in Atlantic Monthly, March 2020 – bit.ly/30JeQAz):
“Throughout all these events [hurricanes, floods, fires, etc.], libraries have stayed open, filling in for the kids when their schools closed; offering therapeutic sessions in art or conversation or writing after losses of life; bringing in nurses or social workers when services were unavailable to people; and hiring life-counselors for the homeless, whom they offer shelter and safety during the day… Today, interventions like those have a ring of simpler days.”
Although library system responses are not uniform across the country, they follow a general pattern of limiting contact while trying to make it possible for digitally disadvantaged populations, as well as others, to access virtual services. In St. Paul, library buildings are still closed to the public, but unlike Hennepin County, drop-boxes are now open for returning materials. St. Paul libraries were already fine-free, and the grace period for returning materials is extended through August 2020. Highland Park is one of the libraries offering curbside pickup. Expiring library cards are extended through 2021. See the system’s website for more.
Highland Park, like most St. Paul parks, is open to the public, although the recreation center is closed as are public restrooms, replaced by portable facilities. Sadly, the wonderful St. Paul Aquatic Center, which we have covered previously, is closed. (In St. Paul, the beach at Lake Phalen and splash pads located in parks are open. Lake Como is also closed for swimming.) Many parks are offering virtual exercise classes you can do at home—for free.
A non-governmental cultural amenity that Highland Park is known for is Circus Juventas, a youth performance nonprofit that provides education in various “circus arts” including acrobatics and aerial performance. They managed to continue their 2020 Summer Camp using a combination of online or very small in-person instruction and enhanced hygiene. However, their Summer Show, which normally tops off the Summer Camp was to be “Galaxium,” opening July 24. Sadly, this has been postponed indefinitely.
So, we need to talk about homelessness. I confess, I have been riveted in my attention to our own backyard here in South

Minneapolis, mainly the Powderhorn Park Sanctuary. But as I turned my attention to Highland Park, I discovered that very similar scenarios are occurring there, with one or two exceptions. In terms of encampments, there are nearly as many people camping, but in a much larger number of sites, so all quite small in size. According to a July 17 piece in the Star Tribune there were at that time “84 homeless campsites with an estimated 270 residents, a tenfold increase from last summer.”
The one exception was actually not in St. Paul, but in Maplewood, where a large encampment was closed down after a drowning and a machete attack culminated a trend of rising chaos and danger.
There has been a statewide executive order preventing officials from simply closing encampments. Alternative accommodation must be found for all residents before the camp can be cleared. The same Star Tribune article quoted David Katzenmeyer, director of People, Inc., a nonprofit contracted by Ramsey County to work with homeless populations. “He said the governor’s order halting the dismantling of camps has made it easier to establish and maintain connections with homeless individuals. Generally, Katzenmeyer said, his team sees better outcomes persuading homeless people to seek services when camps are not dismantled.”
To end on a positive and soothing note, Southside Pride recommends for your summer nature appreciation a stroll through Hidden Falls State Park. This is accessed from Mississippi River Boulevard, just south of the eastern end of the Ford Parkway bridge. The area of natural beauty is open 6 a.m. to 9 p.m. most days, permits dogs on leashes, and has ample parking for both cars and bikes.