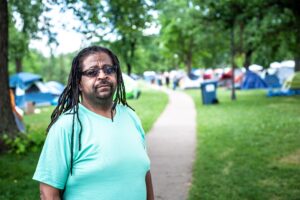 The dream is over. The East Powderhorn Sanctuary has been cleared. The campers evacuated. Protesters were arrested and then released.
It ended the way it always ends, according to longtime homeless advocates. Some criminal elements start to get violent. The camp becomes unsafe. And the authorities have to break it up.
People in the Powderhorn community volunteered long hours to feed and nurture their new neighbors, but, in the end, it wasn’t enough. The problems were just too big for the neighborhood.
Who were these homeless people?
They were the unemployed and the unemployable. Alcoholic and drug dependent, some of them were looking to find a good time without having to do hard time. Some were mentally ill. Some were refugees from abuse. Some were Natives down here from the Rez. They all had one thing in common—they were unable to function in as complex and expensive a city as Minneapolis. They weren’t able to put a roof over their heads. They needed help.
And lots of people stepped in to help. NECHAMA, a Jewish disaster relief organization, provided a portable shower. Londel French, a Park Board commissioner, was down there almost every day. Angela Conley, the Hennepin County commissioner for the area, spoke at a Sanctuary meeting. But it wasn’t enough. It wasn’t nearly enough.
The people who live in Powderhorn gave up their park willingly, and they fought the Park Board to allow the homeless to stay. They opened their arms, they volunteered, they baked food in their kitchens and they tried to be neighborly. But they wanted help in solving this problem.
Lily Lamb organized a camp-in at the governor’s mansion to demand action solving homelessness. Earlier, she had sent this to city officials: “The Powderhorn Park residents demand to know our elected officials’ response to the current emergency humanitarian situation in Powderhorn Park and seek a solution immediately with dignified, culturally informed permanent housing. We, the community, stand in support and solidarity with our new residents at the Powderhorn Sanctuaries and collectively call for change with and for them. Housing is a human right, and in our community, homes should be for all.”
But there was no response from the city and no response from the governor. The county was accessible, and Londel was doing what he could, but Mayor Frey and Council Member Cano were AWOL. When they were needed most, they were nowhere to be seen.
Lily Lamb is right. This is a humanitarian crisis. There are people who are lost and cannot find a way to a home. Two years ago, when homelessness was overwhelming the Hiawatha overpass and Cedar Avenue, Hennepin County set up a Navigation Center to help people find an apartment, a job, chemical dependency counseling, educational opportunities. Why wasn’t the city organizing that in Powderhorn?
When it began last month, Commissioner Conley said she’d been trying to reach Cano but hadn’t gotten a response. Cano told the press she was hoping to connect with Conley sometime that week. Clearly the crisis in Powderhorn wasn’t a priority for Cano.
Lily Lamb told City Pages: “We’re the richest country in the world—we’re the best-rated state to live in across the United States—and we have essentially a refugee camp directly outside my house, and no one seems to care besides neighbors. It feels like we’re screaming into the void.”

What happens to a dream deferred?
Does it dry up
like a raisin in the sun?
Or fester like a sore—
And then run?
Does it stink like rotten meat?
Or crust and sugar over—
like a syrupy sweet?
Maybe it just sags
like a heavy load.
Or does it explode?
—Langston Hughes