Editor’s note: On Monday night, Aug. 3, Margaret Hastings, Carin Peterson and Janet Nye, on behalf of the Decriminalization of Homelessness Working Group, pitched tents in the U.S. Bank Plaza across the street from the Government Center and City Hall.

We were frustrated. Frustrated by the horrific treatment of people who are homeless and who have been pushed out of parks, and 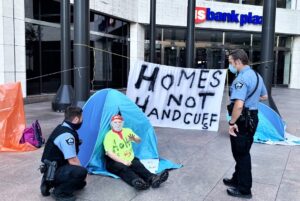 frustrated by the arrogant unwillingness of people like Minneapolis Mayor Jacob Frey, David Hewett at Hennepin County and Cathy ten Broeke at the Minnesota Housing Agency to discuss with us, or share their plan with us, about how Minnesota would use millions of dollars from Congress to dramatically reduce homelessness.
So, we made a modest decision. We’d pitch tents and spend one night on the plaza next to the Hennepin County office. We’d invite county and state officials as well as the mayor and Minneapolis City Council members to meet with us, listen to our ideas and share their plans. Doesn’t this seem reasonable? Apparently not to Hennepin County. Neither commissioners nor staff responded to our requests to meet. Neither did the mayor or city council members. And when we arrived at the plaza, Hennepin County security officials told us that we would be arrested if we tried to pitch a tent. Really? Didn’t we the people pay for this plaza?
So we went across the street, to U.S. Bank Plaza. We pitched our tents, a bank security person asked us to leave or he would call the police. We said that we intended no harm to the building or plaza, and thought spending the night there was reasonable.
Soon two Minneapolis police cruisers and about eight police officers arrived. One clearly was in charge. He listened politely as I explained our concerns about meeting the needs of people who are experiencing homelessness. He expressed sympathy when we explained that we simply wanted to spend one night there. He agreed to talk with U.S. Bank officials while notifying us that we technically were trespassing.
I informed the officer that we had no intention of leaving even if U.S. Bank moved forward with asking the police to start arresting.
A few minutes later, the officer returned. He said U.S. Bank officials were willing to have us stay there for the night so long as we moved our “Homes not Handcuffs” banner from their flag poles to city utility poles. We didn’t see the problem, and said if that was the only condition, we’d be willing to do that. (Ultimately U.S. Bank didn’t press us to move the banner. We didn’t.) The Minneapolis police wished us well and left.
Isn’t this ironic? The Minneapolis police mediate an agreement with a large private company. Company officials say it’s OK to stay for the night. Our elected officials refuse the request. (They also ignore our requests to meet).
What should be done?
1. People experiencing homelessness who are forced to live outside in our parks, housed neighbors who support the parks, and the many other real allies and advocates for people experiencing homelessness have made the ongoing rational, humane demand: STOP BUSTING UP THE CAMPS.
2. Public officials should be meeting with the residents of the encampments and housed supporters to work with them, collaborate with them, listen to them to work together to provide safety for the camps, supplies and plans for dignified safe homes and housing ASAP.
3. Winter is coming. Public officials should be feverishly working with all of the above to provide safe, dignified and appropriate housing and shelter. It IS NOT OK for our public officials to count on arrival of winter to force people experiencing homelessness to be frozen out of the public eye. Our unhoused community members have been frozen out for far too long.
Across the United States people experiencing homelessness and their allies have called for:
Our policy makers and public officials to purchase tax forfeited homes, HUD-foreclosed homes and federal surplus properties. To be used immediately and for those that need rehab to immediately start the rehab.
To provide appropriate safe homes and housing for those people among our unhoused community who struggle with mental health, addiction, trauma. (So far, our public officials have created the false narrative that people experiencing homelessness are criminals. They criminalize people based on housing status.)
Respond to the tiny home projects that are either shovel ready or in process. Stop stalling on this very workable and affordable means of providing homes.
All of the above come from people experiencing homelessness. They must be actively involved, not as tokens, but as residents of our city, county, state who deserve that our public and elected officials do their job. Serve all residents, housed or unhoused.
The City of Minneapolis, Hennepin County and the Minnesota Housing Agency have focused on short-term solutions. They’ve spent millions on shelters which many youngsters and families have testified are dangerous, undesirable places. These are NOT medium or long-term solutions.
We need action. We’re not going away. Hopefully in the future, city, county and state officials will work with us—rather than ignore or threaten us.
We the people—whether currently housed or homeless—deserve better.
Stop threatening, start respecting homeless people and their allies!!
Here’s good news and a huge irony. We know more than enough to dramatically reduce the number of homeless families and individuals—the people several of us saw and spoke with recently as we spent hours—some of us all night in downtime Minneapolis. The huge irony? For daring to stand up with homeless people, we were threatened by government officials and supported by a huge company.
1. Will Hennepin County and other bureaucrats view “we the people” as allies—or as people who need to be threatened—as we were on the night of Aug. 3?
2. Will local, county and state officials do their jobs—and abandon policies that have spent hundreds of millions of dollars, but failed to reduce youth and family homelessness?