Not a Happy Birthday for Travis Jordan

BY JESS SUNDIN, AS ORIGINALLY PUBLISHED IN FIGHT BACK NEWS 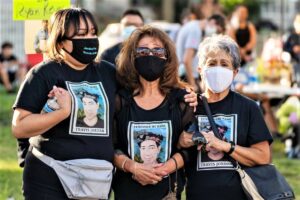 Travis Jordan’s girlfriend Taren Vang, mother Flo Ching and aunt Lei Gahler gather for what would have been his 38th birthday. (Photo/Brad Sigal)

Hundreds of protesters rallied outside the Minneapolis police’s 4th Precinct in North Minneapolis, July 31, to demand justice for Travis Jordan, on what should have been his 38th birthday.
On Nov. 9, 2018, Travis Jordan was shot and killed by two rookie officers of the Minneapolis Police Department’s 4th Precinct during a wellness check for his suicidal ideation. Officers Neal Walsh and Ryan Keyes, who had each been on the police force less than a year, responded to the call. Instead of saving Travis’ life and providing him with the mental health support he needed, they killed him. County Attorney Mike Freeman made the determination not to prosecute the officers involved and justified their use of deadly force.
Speakers included Jordan’s mother, partner and friends, as well as the loved ones of others killed by police, and organizers with Twin Cities Coalition for Justice 4 Jamar.
Marshals on foot, in cars and on motorcycles diverted traffic from the stretch of Plymouth Avenue in front of the 4th Precinct building where the rally took place.
One group of artist activists erected a brightly painted house, about 10 by 10 feet, on the lawn. It was covered with the names of people murdered by police and was surrounded by fresh-cut flowers.
Another grouping used large rollers of green paint to emblazon a full traffic lane of pavement in front of the killer cops’ building with Travis Jordan’s name, reminiscent of the pavement “Black Lives Matter” slogan in front of the White House. Several protest banners were lined up to protect the paint as it dried.
The family of Travis Jordan is seeking systemic change in the way that police officers are recruited, hired, trained and, ultimately, held accountable. They are pushing for more attention, effort and resources to be directed toward mental health care and other community social services.
Protesters demanded:
— Mental health professionals be the first responders on scene during a mental health crisis, not the police.
— Travis’ case be reopened and re-examined, along with all other cases involving the use of deadly force by police.
— The officers involved be charged and prosecuted for the murder of Travis Jordan.
— For all of Travis’ belongings to be given back to the family. The Hennepin County Attorney’s office is still in possession of a notebook and a black leather bracelet that belonged to Travis, even though the case is closed.
Travis Jordan has been included in local “Say their names” chants of those killed by the MPD. Jordan’s family and friends’ persistent demands for justice—along with the worldwide outrage over George Floyd’s murder—have given courage for more Minnesota families to demand answers for their loved ones’ killings.
These families cannot get justice under our current system. We need community control of the police, which will let us go back and reopen the cases of killer cops.