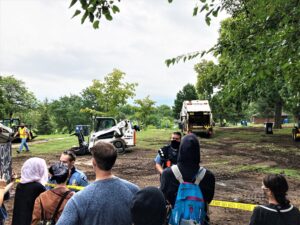 What’s happening with the west encampment in the park? It’s been nearly two weeks since MAD DADS issued 65 Notices to Transition per the Minneapolis Park and Recreation Board’s (MPRB) Resolution 2020-267 (requiring permits, limiting parks and numbers of tents in a park, etc.). There are varying reports about the number of tents remaining, ranging from 35 to 50. From my view it appears to be closer to 50 than 35.
The MPRB states that its goal is to remove camps with documented crime, those that do not meet accommodation requirements and those without permits. There is no definitive deadline for Powderhorn, as the plan is to incrementally assist campers with the transition and avoid using the police as was the case with the east encampment, which resulted in a confrontation between the police and a group of remaining campers and their supporters. Approximately 20 people were arrested.
Minnesota Executive Order 20-55 (effective 7/15/20) prevents governments from closing encampments unless there is alternate housing, shelter or encampment space. This order respects the health of populations at risk during COVID-19 in a peacetime emergency. However, with seven reported crimes in Powderhorn between July 5 and July 13, Park Board Superintendent Alfred Bangoura could override the order. (For additional information see www.minneapolisparks.org/encampments.) 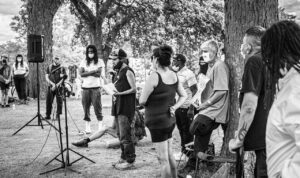 Some of the remaining campers are not interested in leaving for another park. “It’s just moving a problem around, solves nothing.” School buses provided to transport the unsheltered individuals to other encampments recently left empty. No one is very confident about what will happen next. The date of Sept. 1 is floating around, and as the date nears, campers anticipate some kind of action. “It’s a very unsettling feeling.”
The Minneapolis Sanctuary Movement is “a community care effort fighting for housing justice, abolition and land reclamation, and supports the most impacted.” They have been key supporters and resource to the encampment. Some view Powderhorn Park as “stolen land.” A representative of the movement states, “These piecemeal efforts to support encampments (permits, tent limits, park limits) masquerade as solutions, but, in fact, normalize the existence of encampments.” Their website byline is “Displacement is a Disease, Housing is the Cure.” (For additional information see minneapolissanctuary.org)
As of Aug.12 there are four Minneapolis parks approved as meeting the encampment requirements. An additional 12 parks have been identified as possible encampments. There are hundreds of individuals still unsheltered in the park system. For many (both the unsheltered and sheltered neighbors surrounding the parks) as well as the MPRB, the situation is devastating. Between June 12 and 30, the cost of expanded maintenance services was $42,500.
Resident neighbors to the Powderhorn encampment report continued concern for the health and safety of the people living in the encampment and the neighborhood in general. Some who have supported the encampment (by volunteering and donating, attending meetings and participating in solutions) say there is a growing divide with little if any room for civil discourse. “Too much us and them: you either support the encampment or you don’t; too much blame and finger-pointing without opportunity for movement toward solutions. Some of the meetings in the park have become downright disrespectful.”
It’s a perfect 2020 storm in Minneapolis; an international pandemic that is thriving, the killing of George Floyd by the MPD, protests and riots that have spread throughout the country and beyond, civil unrest and destruction, unemployment, an election year, financial devastation for many and, as we well know, increased homelessness. Powderhorn has been hit and injured. How exactly do we proceed to recover and heal?