Chicago Avenue bears the brunt of the storm 2020 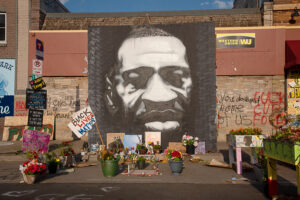 Since May 25, 2020, Chicago Avenue in South Minneapolis will forever be associated in history with the “George Floyd uprising.” In fact, the exact location where the murder of Floyd occurred, 38th Street and Chicago Avenue South, is unofficially renamed George Floyd Square (and making that official is one of the demands activists are making reopening of the intersection contingent upon). So, it’s no hyperbole to observe that Chicago Avenue itself took the brunt of the political storm that swept the nation in the early summer of 2020.
I decided “the 2020 Weirds,” though still applicable, was too light-hearted for this focus.
Though avoiding mass demonstrations for reasons of my age and persistent cough, I have visited George Floyd Square twice for observation, as well as prayer and reflection. Although I regret that I won’t be able to personally help defend it, make no mistake that I wholeheartedly support keeping it closed to traffic and a site of communal life experimentation, autonomous neighborhood sovereignty, and peaceful contemplation or demonstration. Forever if necessary. 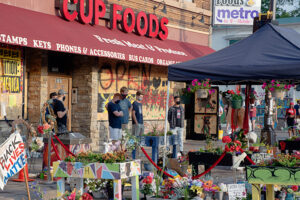 Even with one intersection blocked off, the hectic pace of commerce goes on, on Chicago Avenue as elsewhere. We’ll start with that most necessary of necessities, groceries. Chicago Avenue actually starts in downtown Minneapolis, and near its source, at the corner of 3rd Street and Chicago, there is a Trader Joe’s in the ground floor of a medium-rise new apartment building. (Its actual address is 721 S. Washington Ave.) The next full-size grocery store on Chicago Avenue is six miles south of there—Kowalski’s at 5615 Chicago Ave. Both of these are fairly upscale shops, with lots of organic produce and gourmet freezer meals.
Another option are the little mom-and-pop shops that appear along the length of Chicago. Indeed, Cup Foods itself, George Floyd’s Ground Zero, is one of the largest of these. Two others that are quite nearby are Amigos’ One Stop at 3159 Chicago and Toni’s Market, at 3500 Chicago. Another one, in Elliot Park, is the Elliot Park Grocery at the corner of 16th Street and Chicago Avenue. Many of these stores cater to either Hispanic or East African customers, sometimes both.
There is an excellent almost full-sized grocer in the Midtown Global Market—the Produce Exchange. Their stock is a mixture of the upscale co-op / Trader Joe’s/ Whole Paycheck type stuff and simple demotic pleasures like Pepsi Cola, Lay’s potato chips and Kemps ice cream. It’s good value, and you can also order online for delivery by Mercato. And for your locavore needs that Produce Exchange might not happen to have, Grassroots Gourmet is right “next door” in the market with local honey, syrup, meats, cheeses, baked goods and more.
One option you unfortunately cannot take is to pick up some convenience store-type fare at Walgreens. The store at 4323 Chicago 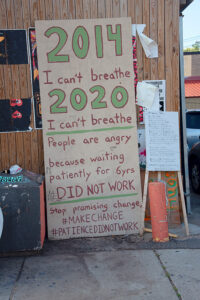 had just recently reopened after repairing damage from late May looting when it was burned extensively in the looting that spilled out from downtown’s Nicollet Mall on Aug. 26-27. The store is closed again for an indeterminate time.
In the area of services, there are bike shops. On the Greenway near Midtown Exchange there is an outpost of Freewheel Bike Shop, but sadly, this one location is closed as part of their cutback in response to COVID and other issues. Freewheel transitioned from a single shop run by a cooperative to a small metro-wide network of shops, no longer a co-op but still progressive and community-involved. The nearest shop open is the original one in the Cedar-Riverside neighborhood.
But right on Chicago, at 3515, is Full Cycle Bike Shop, which is part of Pillsbury United Communities. They operate a youth training program as well as selling and repairing bikes. The shop is open, but by appointment only. See fullcyclebikeshop.org for more details.
The Beauty Store, more or less across the street from Walgreens, is a salon that I have visited a few times, at first for a mani-pedi. Unfortunately, they don’t do nails any more, but they provide a lot of other services: haircuts, coloring and other treatments, massage, and waxing. It requires an appointment, booked through the website or by phone.
Or if you are a ladylike person who has little hairs growing out of your face, you may want to try threading. It’s very reasonable, and not much more painful than waxing. (Hey, I gotta be honest, I’m a journalist!) Leila’s Brow Art, located in Midtown Global Market, does the business. I was very happy to see, on my one trip to the MGM recently, that they have reopened. Their shop sort of has socially-distanced built in so I don’t think you need an appointment. They just use a sequential sign-in sheet to schedule, and usually have only one threader on duty at a time. 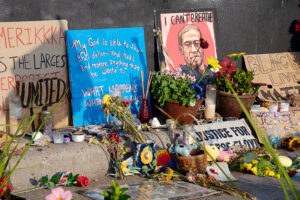 Another wonderful service / resource on Chicago Avenue has sadly closed down. This the People’s Movement Center, a “healing justice” bodywork and other therapies collective with a huge number of amazing-sounding practitioners. I always meant to pay them a visit but never got around to it and now it’s too late. BUT they are very kindly leaving their website up through 2020 so you can contact the practitioners. Check out peoplesmovementcenter.com.
We are mostly going to leave out retail for now because it’s not a big priority compared to, say, food and health care—except for two brief mentions. Flotsam and Fork, an imported and artisanal kitchen and housewares store, which we covered in a previous year, was planning to reopen right before the George Floyd uprisings started. Being located within George Floyd Square, they decided not to reopen at all, but to go back to their earlier business model of all online sales and the occasional pop-up. Check out their Instagram to keep abreast of developments.
The other is the much-lamented Uncle Hugo’s / Uncle Edgar’s combined science fiction and mystery bookstore, which burned to the ground in late May. Its future is still a bit uncertain, to be frank. Last I heard, the owner was battling with the city because they were refusing to grant demolition permits to businesses with any outstanding taxes. This is a quite insane policy, considering that many businesses were shuttered for months before they were looted or burned, and that in a case like Uncle Hugo’s / Uncle Edgar’s, their smoldering hole in the ground in a busy urban area is very dangerous. Heck, the city ought to just demolish and clear the site for them, as a basic public safety measure.
And by the way, we don’t usually cover hotels, but thought you might want to know—the Midtown Sheraton is permanently closed. No word on future plans for the building or site.
And now to the restaurants and cafes and such. I’ll be brief so I can get them all in the space. 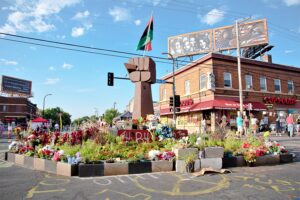 Zen Box Izakaya – 602 S. Washington Ave. Takeaway available, or patio dining with reservations. Delivery available through Toast or ChowNow. Country style Japanese, ramen, Bento boxes.
Salsa La Salsa – Midtown Global Market (MGM). Open for indoor dining, reservations recommended. Mexican classic with full bar.
Eastlake Craft Brewery – MGM. Open for patio drinking. You may also take MGM-purchased food to the patio. Also, growlers and crowlers to go.
(NOTE: the remainder of the MGM eateries are takeout only, unless also offering delivery. With takeout, you may sit in the socially distanced seats in the dining court and remove your mask only while eating and drinking. In general, masks are required in the public areas of the Market. There is also a small amount of “open” patio seating.)
(Another NOTE: Taco Cat closed permanently at the end of August.)
Phams Rice Bowl – MGM. Asian fusion. Bubble tea.
Andy’s Garage – MGM. Open early for breakfast. Breakfast, burgers, diner food.
Hot Indian Foods – MGM. Modern Indian “street food.”
Sabbai Cuisine – MGM. Thai specialties. Teas and smoothies.
Infused Life Plant Based – MGM. New for 2020. Vegan fresh light bowls and smoothies.
Intown Sushi – MGM. Sushi, nigiri and related dishes.
Manny’s Tortas – MGM. Now a small chain restaurant. Mexican tortas, Mexican sodas.
Moroccan Flavors – MGM. Moroccan foods including meat or veggie tagines.
Safari Express – MGM. African deli and street food. Camel burgers.
Jakeeno’s Trattoria – MGM. Pizza by the slice and other fast Italian.
Mapp’s Coffee – Great coffee. Other drinks and baked goodies.
Los Ocampo in MGM – it was the only Los Ocampo in the area until recently…
Los Ocampo – SoPhi apartments, Chicago and Lake. Not on Google Maps yet but open.
Modern Times – 3200 Chicago Avenue. Neighborhood favorite, getting back to its basics. Breakfast, sandwiches, burgers and more. Check website for current options.
Jakeeno’s Pizza and Pasta – 3555 Chicago Ave. Since 1975, pizza, pasta, salads, beer, wine, gluten-free, vegan options. Open 3 p.m. Takeout and delivery.
Dragon Wok – 805 E. 38th St. Within George Floyd Square, one of the few open. Takeout and delivery only.
Just to get back to the Midtown Global Market again, I noticed a new business in the old Kitchen Market space, and it made my heart leap up. Sean Sherman and Dana Thompson’s The Indigenous Food Lab is now open in the market! It’s not really an eatery, and it wasn’t announced with great fanfare. For now, they are using the space to provide 400 meals a day to those in need through a nonprofit called Minneapolis Central Kitchen. Future plans include instructional programs, teaching skills such as identification, gathering, cultivation and preparation of Indigenous ingredients, and more.